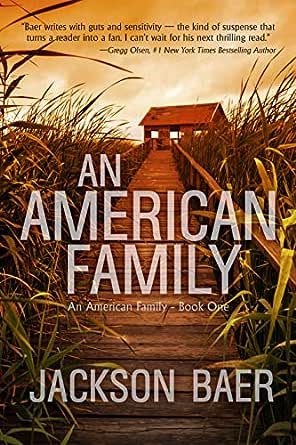 You've subscribed to An American Family! We will preorder your items within 24 hours of when they become available. When new books are released, we'll charge your default payment method for the lowest price available during the pre-order period.
Update your device or payment method, cancel individual pre-orders or your subscription at
Your Memberships & Subscriptions
There was an error. We were unable to process your subscription due to an error. Please refresh and try again. 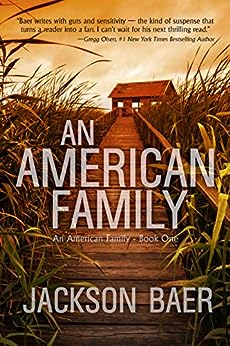 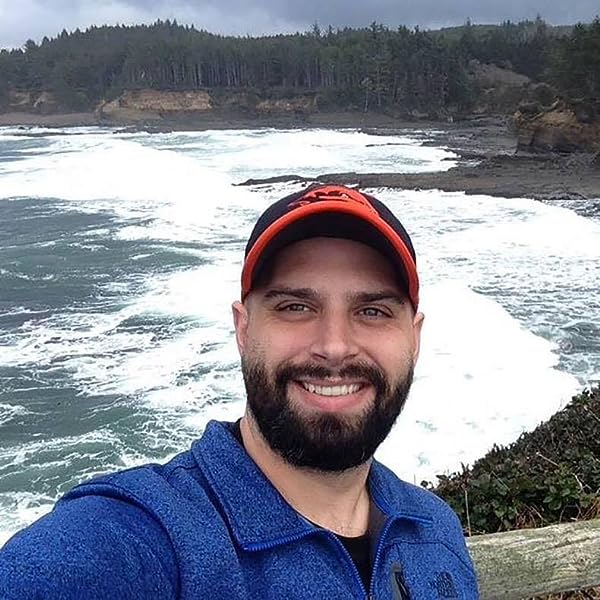 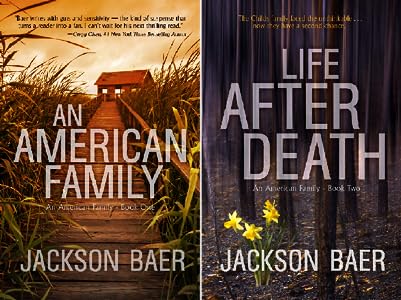 I'm a professional thrifter, the father of four children, and an avid runner. I was born and raised in Georgia, and spent time in Oklahoma, California, Connecticut, and then Oregon, as an adult. I'm a graduate of Oregon State University and now reside in North Georgia, raising my family, near family. I'm a bit of a free spirit who enjoys working from home, traveling around, looking for treasures to share, and creating worlds that otherwise would not exist. Thrifting and writing are my two passions, and I'm fortunate to be able to do both.

"Baer writes with guts and sensitivity -- the kind of suspense that turns a reader into a fan. I can't wait for his next thrilling read." ~ Gregg Olsen, New York Times #1 Bestselling Author
--This text refers to the paperback edition.

3.2 out of 5 stars
3.2 out of 5
53 global ratings
How are ratings calculated?
To calculate the overall star rating and percentage breakdown by star, we don’t use a simple average. Instead, our system considers things like how recent a review is and if the reviewer bought the item on Amazon. It also analyzes reviews to verify trustworthiness.
Top reviews

Seth Teegarden
5.0 out of 5 stars Exciting, great character development!
Reviewed in the United States on October 15, 2018
Verified Purchase
Well let me start off by qualifying this glowing review with this: this whole story takes place in the city where I grew up, Woodstock, GA. So reading about all the parks and places in and around Woodstock was like literally just walking down memory lane. I spend many a night at Hobgood park right where our characters are multiple times. So obviously I was going to love a book that took place in a town so dear to me. Now to the story, I have read this author's other 2 novels and while I liked them, this one was his best yet. The story was captivating and thrilling. While it was not a long book at all, he does a wonderful job at painting a picture of all the characters. I think that was one of the most impressing parts to me, honestly, is that in a very short amount of time, there is amazing character development. I found myself getting involved in the characters very quickly. Then the mystery part of the story was very well laid out. There were some good twists and original thoughts when it came to the mystery of the disappearance of Ramie. I thought the author did a really good job of keeping your on your toes with how he unfolded the case. He wove the case in beautifully with the family story. At the end of each chapter I couldn't put it down. I kept having to read the next chapter then the next, until I was completely finished. Many times you read a suspense/thriller/fiction, crime story and the build up is amazing but the ending was poor. Well that was definitely not the case here. The book finished very nicely by not leaving any major loose ends or major cliffhangers. While at the same time there is a lot of room for expansion of the story and the characters involved. I give this book a definite 5/5 and I cannot wait to read the next one
Read more
9 people found this helpful
Helpful
Comment Report abuse

Robin Perry
4.0 out of 5 stars You'll Be Glad You Did
Reviewed in the United States on October 8, 2018
Verified Purchase
I don't love reading new to me authors, I have limited time and new authors can be risky. I want to read a book that starts strong and stays strong. I want to be entertained! An American Family did just that. I even gasped at one point! Read Jackson Baer' s book...you'll be glad you did.
Read more
10 people found this helpful
Helpful
Comment Report abuse

Julia Carter
3.0 out of 5 stars Opinion of both books in this series
Reviewed in the United States on November 12, 2018
Verified Purchase
In a rare lapse of judgement, I ordered both books at the same time. I wish I'd stopped after the first one. The premise is very intriguing, but the execution is flat, flat, flat. All telling, no showing. The main character, Isaac, is a whiner. A sniveling whiner, even. This trait killed much of the sympathy or good will I should have felt for him. His adult children were either too good to be true, or too naive to survive. The real tragedies they faced were minimized by the lackluster writing. Everybody in these books fell in love at first sight, and married quickly. The love stories were ridiculously unreal and kind of cartoonish.
Added to all of this, the author has no idea of how to describe a woman's appearance without using the word "thick". Not fat, per se <----- a direct quote - but "thick". Not voluptuous, not curvy in the right places, not full-figured, not even an ample bosom. Not pleasingly plump. Thick. Beautifully thick.
I really hated not to like these books more. I admire anyone who writes and who puts his/her work out into the public domain. It takes guts and strength to do so. But for the benefit of voracious readers like me who treasure good writing, I have to say: don't waste your time.
I went back and forth between 2 and 3 stars, eventually deciding on 3 because of the premise. That's overly generous, considering how far below par the execution fell.

JPB
4.0 out of 5 stars Compelling Family Drama
Reviewed in the United States on December 6, 2018
Verified Purchase
An American family wasn't what I expected, but it's a gripping family drama that centers around how a family deals with unexpected loss. The characters in this book are deliciously flawed, each one struggling with some sort of addiction or problem.

For me, it made me think about tragedy and how we tend to paint the victims of such things as saints, when in reality they have all the same problems as anyone else. But that doesn't make the tragedy any less real or painful. And sometimes, those vices are the only way a person can survive the tragedy.

I realize that some may pick up this book for the suspense element, and there is a bit of that with an FBI sideplot, but to judge this book on that metric would be unfair. It's not what it's really about, and it's not where it really shines. Books so often tackle the fantastical, but this one stays grounded and tells a story about real people dealing with real life in the midst of horrible circumstances.

Sharon
4.0 out of 5 stars SUSPENSE WITH A TWIST
Reviewed in the United States on November 11, 2018
Verified Purchase
I was surprised at the quality of writing. The Husband/Father was allowed to show his vulnerability and compassion in a number of trying circumstances. Although he shows a weakness for alcohol and a "wandering eye" for attractive women, our pratogonist is a good man, with strong moral values. He wants to do the right thing for those he loves, but sometimes gives in to his weaknesses. A well drawn story with unexpected insight by the author.
Read more
One person found this helpful
Helpful
Comment Report abuse

jomarch
2.0 out of 5 stars Cannot recommend
Reviewed in the United States on December 10, 2018
Verified Purchase
Sorry to give a negative review. The main character, Isaac, was unlikeable, and the writing was repetitive and lacked any kind of flow or style. There were some twists and turns that kept me reading through two-thirds of the book, though. I guessed the ending and skipped to the last couple of pages to see if I was right. Cannot recommend this book.
Read more
Helpful
Comment Report abuse

Amazon Customer
5.0 out of 5 stars Enjoyable story
Reviewed in the United States on November 18, 2018
Verified Purchase
This story kept me turning pages right to the finish. Looking forward to reading the next book in the series. Highly recommend.
Read more
One person found this helpful
Helpful
Comment Report abuse

Kindle Customer
1.0 out of 5 stars Could not finish
Reviewed in the United States on February 4, 2019
Verified Purchase
Most boring book I've picked up in a long time. Characters were not interesting and story did not engage at all. It was like someone recounting the basic facts with no description. The main character was extremely unlikeable. Don't waste your time.
Read more
Helpful
Comment Report abuse
See all reviews

john emberton
2.0 out of 5 stars It took two books to tell a story that went nowhere.
Reviewed in the United Kingdom on July 22, 2019
Verified Purchase
If this is typical of an American family god help America, what were we supposed to feel for the main character,the father, other than contempt, if that was the plan, you succeeded.
Having said that, the writing style kept me hooked through both books hoping he would get his just desserts.
Read more
Report abuse

Philip Lindsay
2.0 out of 5 stars Ordinary
Reviewed in Australia on April 15, 2020
Verified Purchase
I went through the whole story waiting for something exciting, or even interesting, to happen.
It never did.
I shan't bother with any more
Read more
Report abuse

Lori
2.0 out of 5 stars A simple read
Reviewed in Canada on March 7, 2019
Verified Purchase
The story idea is great, but the writing drags and is mundane in details. Too much emphasis on details that don’t move the story along.
Read more
Report abuse
See all reviews