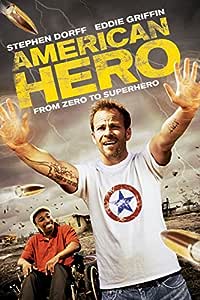 Melvin (Stephen Dorff), a reluctant hero who is far from super, has been suppressing his telekinetic powers for years with booze, drugs, and women. In the process, he has failed at practically everything, most of all as a parent to his son. After a brush with death, Melvin decides to use his powers for good and clean up the streets of New Orleans with the help of his best friend/definitely-not-a-sidekick, Lucille (Eddie Griffin). For a man who can do the impossible, it might be a fight even he can't win.

3.9 out of 5 stars
3.9 out of 5
51 customer ratings
How does Amazon calculate star ratings?
Amazon calculates a product’s star ratings based on a machine learned model instead of a raw data average. The model takes into account factors including the age of a rating, whether the ratings are from verified purchasers, and factors that establish reviewer trustworthiness.
Top Reviews

nina
3.0 out of 5 stars Ah, It Wasn't THAT Bad, Lower Your Expectations
Reviewed in the United States on February 7, 2016
Verified Purchase
Of course this isn't a great movie but reading the other reviews it's like people expected this to be some Oscar-winning masterpiece. This is a Stephen Dorff movie and we all know he's notoriously famous for making wretched movies. You have to think differently when viewing one of Dorff's films. I have been a Dorff fan for years and the first thing I do is lower my expectations when I am going to see one of his films. I EXPECT his movies to be bad. He hasn't made a good movie since Blade so no way in the world do I expect a change now. Yes, this movie sucks but compared to many of Dorff's other movies I thought it was okay. It was entertaining for one. I enjoyed the characters. The writing wasn't that great but the acting was good on everyone's part. I think the film could've relied less on New Orleans stereotypes but other than that this film seemed genuine and decent for what it was about. But, anyone who expected a Stephen Dorff movie to be GOOD is way off-track. This is his M.O. He likes making bad movies, and I've come to respect him for it. I'll always be a Dorff fan. Trust me, if you watched Heatstroke, Carjacked, Cecile B. Demented, and Botched...well American Hero is Terms of Endearment compared to those turkeys.

If you just like to be entertained and not expect much and even laugh a bit (Eddie Griffin is hilarious as usual), check it out. Dorff and Griffin have great chemistry and make you believe they've been friends for years. Dorff didn't really have to do any acting considering he's basically playing himself, an over-the-hill party boy and woman chaser.

Overall, 3 stars. From Dorff it could've been much worse! Oh, and I take back what I said about hasn't made a good movie since Blade. Shadowboxer is pretty good.

Mitty P
5.0 out of 5 stars Four and a half stars!!
Reviewed in the United States on September 25, 2016
Verified Purchase
I know alot of the reviews are negative on here. Despite that, being a big Stephen dorff and Eddie Griffin fans, I went ahead and bought the dvd anyway. And I gotta say I wasn't disappointed! I loved this movie! The acting was top notch. And I especially loved the friendship between Melvin and Lucille. Even though they are different races, it felt like they were real brothers rather than best friends. The only reason why I give it 4 and a half and not 5 stars is cuz it ended with some loose strings that I wish were addressed. But other than that, I'm glad I bought it:))
Read more
One person found this helpful
Helpful
Comment Report abuse

Raekwon Morgan
5.0 out of 5 stars Great Portrayal of Telekinesis/Psychokinesis
Reviewed in the United States on December 27, 2018
Verified Purchase
I appreciate the time and effort the director put into making this movie, American Hero. I see that they even made it a bit of a comedy as well. It has much variety and culture in it as well. I think they chose the best actors for each individual part too.
Read more
Helpful
Comment Report abuse

Crain Snyder
2.0 out of 5 stars Watch it if it is free...
Reviewed in the United States on March 6, 2016
Verified Purchase
The premise was amazing! I was excited to see the movie and had such hopes for the potential. But it just sucked. All the way through they missed opportunities to make it a decent movie and the end was just a slushy crap puddle. Nothing is really determined and even the "Big Scene" was just find of vague, at best.

I blame the director for dropping the ball.

Grant L.
1.0 out of 5 stars Number #1 for WORST movie EVER
Reviewed in the United States on December 17, 2015
Verified Purchase
Terrible movie. Weak story. Pathetic camera work. Let me give you the gift of an hour and a half of your life not wasted.
Read more
6 people found this helpful
Helpful
Comment Report abuse

Debbie
1.0 out of 5 stars One Star
Reviewed in the United Kingdom on July 18, 2017
Verified Purchase
Its no good carnt play in the uk waiste of money
Read more
Helpful
Sending feedback...
Thank you for your feedback.
Sorry, we failed to record your vote. Please try again
Report abuse

Page 1 of 1 Start overPage 1 of 1
This shopping feature will continue to load items when the Enter key is pressed. In order to navigate out of this carousel please use your heading shortcut key to navigate to the next or previous heading.
Back
Next
Pages with related products. See and discover other items: eddie griffin