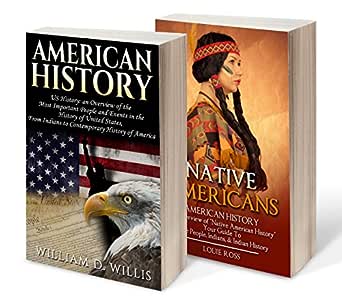 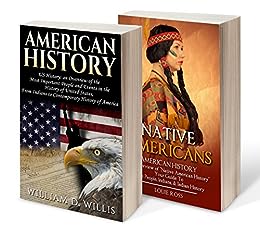 The Native Americans book, though, didn't not fare as well in my eyes.
I caught so many grammatical and punctuation errors in just the first few pages, my proofreader hat wouldn't allow me to enjoy the material very well. Several back-to-back paragraphs were repetitive and many sections felt as though the author rushed the writing.
Still, the book did contain many new pieces of information and the entire book was not a full thumbs-down.
I appreciate the way Pocahontas is introduced the correct way vs. the watered-down Disney version. It was great showing what her real name was and the fact that she was a very young girl, not a young woman, when the meeting between she and Smith occurred. A round of applause for mentioning the fact that Smith was a cad and not a hero.
Would I recommend this book? Maybe not, based on all the errors which could have easily been caught by a good proofreader.

Nena5
5.0 out of 5 stars Great bundle on history
Reviewed in the United States on October 7, 2018
Verified Purchase
I've read many books on American history, different styles, sizes. I think this is a great bundle to read. The books complement each other almost perfectly, especially when you want to recap. The first book is about American history and the second about great nation of Native Americans.

An interesting approach to a brief presentation of American history including accounts of eyewitnesses and accompanying pictures. Educational and intriguing read about the most important moment that shaped the US.

The complementing book on Native Americans is a great part of the bundle giving a brief overview of Native American history, culture, traditions, arts, myths, legends as well as medicine and cures. It acts as a guide where to search for more if you are interested in getting more information and learn about this great nation.

It narrates about some of the worst times in their history, and explains the misconceptions and misunderstandings from the time of the first settlers to the present day.

Both books are well-written and educational. Recommended to anyone interested in American history looking for somewhere to start and get ideas where to go next for deeper insights.
Read more
One person found this helpful
Helpful
Comment Report abuse

I've always loved history, and never get tired of it. Here Lean Stone Publishing combines two history summary manuals: AMERICAN HISTORY, and NATIVE AMERICANS. The point of both these books is to provide a summary overview, throughout the appropriate historical period, and secondarily to intrigue readers into further examining the historical subset topic.

After reading several history books by this author, I've found him a reliable source for presenting facts, drawing timelines, delineating events and personages, and placing it all in a sensible and comprehensible framework. He has an enjoyable writing manner, emphasizing positives, and inspires readers to research further for themselves, using his work as a background springboard. In AMERICAN HISTORY, William D. Willis presents a more in-depth narrative of the extensive and varied history of the United States.

This topic, the history, culture, and spirituality of the native populations of the Americas, is of lifelong interest to me, so I am pleased to find this concise overview. I found particularly appealing two aspects: the prehistoric migration and cultures; and the overview of the roles of Native Americans during the tragic American Civil War. I'd of course read of the Navajo codetalkers during World War II, but Native participation in the War Between The States is new and fascinating subject for me.
Read more
Helpful
Comment Report abuse

S. J. Main
4.0 out of 5 stars Good Read
Reviewed in the United States on October 2, 2018
Verified Purchase
This book is a combination / non-fictional book written about the American history and Native Americans. The basis of the book is designed neatly with chapters and divided through introductions covering the discovery, revolution, wars and thereafter. What I particularly found interesting was the native Americans segment of the work. I believe, if the work included references, then it may have represented an added sense of authenticity. However, what did exist was enough to briefly cover what needs to be said.
Read more
Helpful
Comment Report abuse

James HeringtonTop Contributor: True Crime Books
5.0 out of 5 stars Guaranteed to keep you reading
Reviewed in the United States on September 11, 2017
Verified Purchase
This is a fascinating bundle that I can justify recommending. It contains two books that I have read previously and found to be very educational to any history buff. The concept will teach you about America and the Native American race. Don't deny yourself this opportunity, pick up your copies now. You will be glad you did.
Read more
One person found this helpful
Helpful
Comment Report abuse

Naya
5.0 out of 5 stars American history (native Americans)
Reviewed in the United States on October 8, 2018
I loved the book. The fact that I learned more reading by myself then reading it in school was really great. I think a lot of people can learn more about the natives and they culture in this book.
Read more
Helpful
Comment Report abuse
See all reviews from the United States

This is a well-organized book. On the basis of what little I know of American History, I would say that it touches upon almost all major incidents of it.
It achieves its purpose in that it has interesting facts and relevant maps and documents that pique your interest enough to want to learn more. The information on Christopher Columbus, Giovanni Cabot, Leif Eriksson, Pocahontas, and the image of the Stamp Act of 1765 are a few examples.
The book also affords a good opportunity for introspection as it harks back upon the time when people from other countries, persecuted for various reasons, landed in America as refugees and immigrants and could build a life for themselves. Chapter 8 (America Today) and the Conclusion give an objective overview of the the formation of political parties and the current political situation.
The content is—perhaps intentionally so—dry as dust and reads like a text book. This is especially evident at the end of every chapter where there are multiple choice questions. There are some spelling errors, such as ‘roller coaster’ being spelled as ‘rollercoaster’; usage errors, such as ‘premiere’ being used instead of ‘premier’; and also a few punctuation mistakes. However, these do not detract from the content.

I liked the way this book is organized and appreciate the amount of information packed into it.
The Introduction says that ‘…you will be learning all about the real first North American settlers; you’ll learn about their early history, their diverse cultures, the difference between the tribes and you will also find out about some of the most famous Native American figures in history’.
Did that happen? Mostly, yes. I felt that I didn’t learn much about the ‘differences between the tribes’ because just the descriptions of a few tribes and not much in the way of comparisons between them are given.

In Chapter 4 (Notable Native Americans in US History), there’s a section on Sitting Bull. However, one of the most important events in Sitting Bull’s life is written much more clearly in Chapter 9.
Similarly, Pocahontas is said to have fallen in love with James Rolfe in one part of the book whereas in another part, it is said that she ‘caught the eye of John Rolfe, a 28-year old widower. Rolfe pulled a couple of strings for the release of Pocahontas, under the condition that she would marry him.’

I wish there was a chapter on the conditions of Native Americans in the nearer past—the changes that have happened in their lives, culture, and their outlook towards life. Also, something about their standard of living and their opinions about the USA of today.

The reading experience was a nightmare for a person like me (I am a trained editor) because there were so many repetitions, spelling/grammar/punctuation errors, unexplained terms, and run-on sentences that made no sense unless you read them more than once.

So, do I think the book has potential? Yes, if it is rewritten and then edited well.
Do I like the book in its current form? No, it has too many errors that made it far from enjoyable.

American History, Bundle I
As a book bundle, these two books make sense together as the two subjects match well. I wish that the parts where notable Native Americans are mentioned in the book American History were more in sync or consistent with what is said in the book Native Americans. Also, a combined timeline of the history of the rest of the United States and that of Native Americans would have been good.
Read more
Helpful
Sending feedback...
Thank you for your feedback.
Sorry, we failed to record your vote. Please try again
Report abuse

Brandie McGowan
4.0 out of 5 stars Very intriguing read!
Reviewed in Canada on August 27, 2019
Verified Purchase
These two books were both very informative and really interesting. I had no idea about quite a bit of the information that the author gave and found myself reading the book almost straight through without stopping., It was a captivating read. I highly recommend this great bundle of books!
Read more
Helpful
Sending feedback...
Thank you for your feedback.
Sorry, we failed to record your vote. Please try again
Report abuse