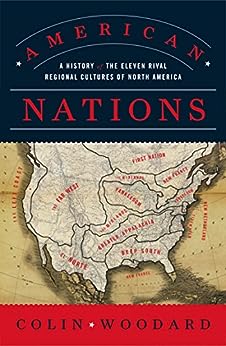 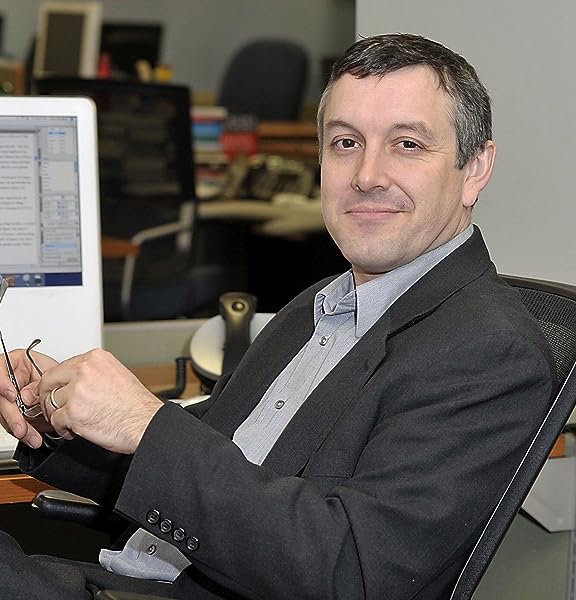 "Woodard explains away partisanship in American Nations... which makes the provocative claim that our culture wars are inevitable.  North America was settled by groups with distinct political and religious value--and we haven't had a moment's peace since." -- Publishers Weekly (Fall 2011 "Top Ten Politics" pick)

"A smart read that feels particularly timely now, when so many would claim a mythically unified "Founding Fathers'' as their political ancestors." -- Boston Globe

"A fascinating new take on our history" -- The Christian Science Monitor

"[In] offering us a way to better understand the forces at play in the rumpus room of current American politics, Colin Woodard has scored a true triumph" -- The Daily Beast / Newsweek

"Woodard makes a worthwhile contribution by offering an accessible, well-researched analysis with appeal to both casual and scholarly readers." -- Library Journal

"[American Nations'] compelling explanations and apt descriptions will fascinate anyone with an interest in politics, regional culture, or history" -- Publishers Weekly (starred review)

"[A] compelling and informative attempt to make sense of the regional divides in North America in general and this country in particular....Woodard provides a bracing corrective to an accepted national narrative that too often overlooks regional variations to tell a simpler and more reassuring story. " -- The Washington Post
--This text refers to an out of print or unavailable edition of this title.

Colin Woodard is the author of numerous books, including Ocean's End: Travels through Endangered Seas, American Nations: A History of Eleven Rival Regional Cultures of North America, The Lobster Coast, and many others. He is a regular contributor to the Christian Science Monitor and the San Francisco Chronicle.

Walter Dixon is a broadcast media veteran of more than twenty years' experience with a background in theater and performing arts and voice work for commercials. After a career in public radio, he is now a full-time narrator with more than fifty audiobooks recorded in genres ranging from religion and politics to children's stories.

4.6 out of 5 stars
4.6 out of 5
2,631 global ratings
How are ratings calculated?
To calculate the overall star rating and percentage breakdown by star, we don’t use a simple average. Instead, our system considers things like how recent a review is and if the reviewer bought the item on Amazon. It also analyzes reviews to verify trustworthiness.

Robert Browning
1.0 out of 5 stars First part good, last part horrible
Reviewed in the United States on November 7, 2019
Verified Purchase
The first part of the book was fascinating, as it provided information of the ideology, settlement, and customs of each nation. That part was an interesting read. I was leaning toward giving this a 4-star rating until I hit about Chapter 24. At this point, the author loses all objectivity and shows his clear northeastern bias against the south. His generalizations about the south aren’t based on any objective data, but on personal prejudices from his perspective. There are a good number of downright incorrect statements that were derogatory toward the southern part of the country, which were really disappointing.

Some of his “historical” conclusions were very inaccurate as well. In chapter 26, he implies that the Nazis adopted their prejudicial attitude toward the black population from the Deep South. The fact of the matter is that Hitler’s philosophy was driven and constructed from Darwin (the idea of the survival of the fittest), and Nietzsche’s ideas of the “superman”, “super race”. Those were the drivers of what begat the Holocaust.

Also mentioned were snide comments about evangelical Christianity. The implications in the latter chapters were that evangelicals wanted a “Christian theocracy”, or evangelical “sharia law”. It is obvious that he really doesn’t understand evangelical population at all and would be well served to learn and understand who that segment of the population is.
Again, the last part of the book forced me to give this a one-star rating. I’d love to see the author do more objective research and redo that last part of the book.
Read more
246 people found this helpful
Helpful
Report abuse

CFraser
5.0 out of 5 stars The mind-shifting I got from this book is the only thing that keeps me sane when I read the news.
Reviewed in the United States on January 8, 2018
Verified Purchase
As I struggled to fathom what has happened to the US in the past year, this book came along and has begun to inform my thinking about how our current governmental scenario has developed.
Understanding the point of view/world view of people of the various "nations" of North America has helped me to be a bit less reactive in my responses as decisions get made that I think are bonkers. But bonkers because I've come from my nation and they've come from theirs.
Next challenge ... figuring out how to bridge the gap between the nations. That's a biggie.
Read more
182 people found this helpful
Helpful
Report abuse

Lindy
3.0 out of 5 stars Warning against buying the audio version
Reviewed in the United States on November 24, 2017
Verified Purchase
Just a word of warning about the Audible edition: there are far too many inaccuracies in the recorded version, inaccuracies which should have been corrected by re-recording. Some of the author's words are changed by the narrator. Some are omitted, while occasionally some are added. Some words are misread in ways that either alter the entire meaning of the sentence or leave the listener wondering what in the world the sentence was supposed to mean. Some words are mispronounced. After listening to about six chapters, I decided to buy the Kindle version so that I could understand what the author had actually written. I then read the text as I listened to the audio version, a process which showed me just how many substantial errors the narrator was making. This low quality of the audio version is unacceptable. By the way, I join those reviewers who praise the first 2/3 of this book, but I certainly urge others to purchase a text version.
Read more
207 people found this helpful
Helpful
Report abuse

Luke T. Evans
3.0 out of 5 stars First two-thirds are excellent and well-balanced, the last third sadly not so
Reviewed in the United States on October 13, 2015
Verified Purchase
I highly recommend this book, but I'm submitting a three-star review based on the book's very weak and undisciplined finish. I thought the first two-thirds of the book provided a well-documented and well-thought-out presentation of America's regional differences and the history behind those differences. It was truly enlightening, even for an historian like myself. When writing the last third, however, the author clearly lost his objective discipline. Whereas the first two-thirds were well-reasoned and well-supported, the last third devolved into stereotypes and generalities, and contained more than a few downright errors, particularly concerning the modern Deep South and Greater Appalachia. I am an unapologetic Left Coaster with clear leanings toward activist Yankeeism, but even I was able to see Mr. Woodard's clear bias in the last third of the book. I found myself cringing more than a few times at the outright inaccuracies contained in his presentation of the modern South. I could list at least a half-dozen factual errors in his presentation concerning the practice and influence of Evangelical Christianity in the Bible Belt, for instance, but would rather not bog down this review with nit-picking. It would be great if Mr. Woodard could write a revised edition where he would exercise the same historical discipline in the last third of the book that he did for the first two-thirds. Such a presentation would truly be worthy of five stars. I still feel that this book is very much worth reading, but readers should approach the last third with a skeptical eye.
Read more
812 people found this helpful
Helpful
Report abuse
See all reviews

Retired
4.0 out of 5 stars Unique and insightful history of the development of regional American character
Reviewed in the United Kingdom on May 27, 2018
Verified Purchase
This book geographically divides the USA into regions characterized by the sorts of people who first settled what is now the American nation. The conclusions are insightful, fascinating and make for cannot-put-it-down reading. The first two thirds of the book are an important history lesson not generally taught in schools. The last third of the book is (unfortunately) rather emotionally driven -- re-making points that were already made earlier.

One thing the author should have done is better fact checking. While most of the history is factual, there are some glaring errors. For example, the author puts Donegal PA on the Great Wagon Road -- a 115 mile mistake. The Great Wagon Road did not go this far west. Another glaring error is erroneous comparison of the early relationship between the thirteen original states to the relationship of nations in the European Union. The author is way off the mark on this and obviously did not study the way the European Union is set up but just made assumptions.

But, the author's overall goal of elucidating the regional characteristics of the USA is well served.
Read more
6 people found this helpful
Report abuse

ulbrich
5.0 out of 5 stars Yankees are not the only nation in America
Reviewed in the United Kingdom on April 28, 2017
Verified Purchase
Anyone who thought that the United States was a coherent country with common values should read Woodard's book. It offers British readers in particular a much more nuanced insight into the complex mix of cultures and values assimilated into the boundaries of this state, and also signposts what might have happened instead at different junctures. The arguments are supported by solid references and the book would make not just enjoyable leisure reading but serve as a valuable alternative viewpoint to received wisdom for those studying the history and constitution of America.
Read more
One person found this helpful
Report abuse

Macdaraesque
4.0 out of 5 stars Very good but broad treatment of American settlement patterns and their political results
Reviewed in the United Kingdom on October 22, 2020
Verified Purchase
This is great ride through the effects of European settlement on US politics up to the present - however, it does get increasingly partisan as it approaches recent years. It is hard thereafter to escape the idea that partisanship was present at the beginning, but lack of awareness or visibility of the primary sources prevented noticing it.
However, this is a hard recommend and builds upon previous scholarship such as Albion's Seed
Read more
Report abuse

Mrs. R
5.0 out of 5 stars Totally engrossing
Reviewed in the United Kingdom on August 7, 2016
Verified Purchase
This is a totally engrossing account of how the United States was founded. Having previously lived in America, I was easily able to identify as well as understand how the ethno-cultural differences came to be - in fact, I found it a revelation: the United States is anything but united! For anyone who has an interest in America - it's history and its politics - this is an unmissable read and I cannot recommend this book too highly.
Read more
One person found this helpful
Report abuse

JCW
5.0 out of 5 stars Good book
Reviewed in the United Kingdom on June 29, 2019
Verified Purchase
Bought for my husband. He said it was a good read
Read more
Report abuse
See all reviews