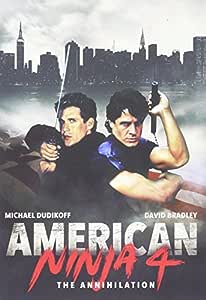 American Ninja 4: The Annihilation, directed by Cedric Sundstrom (American Ninja 3: Blood Hunt) from a screenplay by David Geeves based on the characters created by Gideon Amir and Avi Kleinberger, is produced by Christopher Pearce."

4.4 out of 5 stars
4.4 out of 5
154 global ratings
How are ratings calculated?
To calculate the overall star rating and percentage breakdown by star, we don’t use a simple average. Instead, our system considers things like how recent a review is and if the reviewer bought the item on Amazon. It also analyzes reviews to verify trustworthiness.
Top reviews

Brandon James
5.0 out of 5 stars "I told you the last time it was the last time." ----- Joe Armstrong
Reviewed in the United States on August 23, 2019
Verified Purchase
I have always been a fan of the "American Ninja" movies ever since I was a kid. I have seen three of them. This one I miss because I didn't know Cannon Films did a 4th "American Ninja" film. Well this one features the two heroes of the "American Ninja" film series: Joe Armstrong (Michael Dudikoff) & Sean Davidson (David Bradley) minus Curtis Jackson (Steve James). In this adventure, former karate champion Sean, now a CIA agent, was sent to the African forest to rescue four Delta Force commandos from ninjas. When Sean, his partner & a cute, beautiful American nurse were captured by a madman who want to start World War 3 with a nuclear bomb, the CIA have no choice but to persuade retired Army Ranger Joe Armstrong, now a teacher, to rescues them. Of course, Joe went after he learn that Sean was captured and they were going to executed him & the Americans. As always, Joe Armstrong saves the day using his martial arts skills and him & Sean prevent a nuclear Armageddon from happening. The movie ends when Joe says goodbye to Sean & his allies and went back to the school but not before he told Sean "you can find me in the school".

"American Ninja 4: The Annihilation" is great action movie and the perfect conclusion to Joe Armstrong story arc. This is a must-have for all die hard "American Ninja" fans.

Sueg
4.0 out of 5 stars It was okay.
Reviewed in the United States on August 13, 2014
Verified Purchase
Michael Dudikoff doesn't appear in this movie until the second half. The beginning start out with this black actor getting married and they get a call in the middle of the service that they have to leave. So they go to see what is happening in this country. They stop at their boss's office and watch a video of American men that got captured. They were tortured and killed. So he and his partner get over there and they do all this fighting and a woman helps them hind, but they all get captured. This is when Michael comes in. This is where they find him living the quiet life teaching in some country. They come and ask him to help. It shows him thinking about, but he does go. He takes on all of the bad guys and of course he kills all of them. In the end it shows him walking off back to his life that he had. I would of thought that the ending would of been the black guy getting married again with all of them there at the wedding, but they didn't.
Read more
5 people found this helpful
Helpful
Comment Report abuse

Duncan Pattillo
5.0 out of 5 stars Action classic is a ton of fun
Reviewed in the United States on February 16, 2020
Verified Purchase
Michael Dudikoff and David Bradley shine in this fun 90's action film. James Booth is a great villain in this as well. This film keeps the legacy of the American Ninja franchise going. It mixes international intrigue and ninja action. It delivered what I expected from it. If you are a fan of this genre, then you will be happy.
Read more
Helpful
Comment Report abuse

Stan
5.0 out of 5 stars Funniest Movie Ever Made
Reviewed in the United States on May 20, 2007
Verified Purchase
Here are only a few reasons why this movie surpasses even Plan 9 as the worst movie ever made.

2. All the bad ninjas are COLORCODED! Don't know which ninja is more skilled than the others? Well, they're all wearing prime colors and you know which one is the boss because he's got an eyepatch.

3. The American Ninja enlists the help of some kind of retro-80's junkyard gang to take on the bad ninjas like something out of Mad Max.

4. Lastly we have scenes like the recently un-retired ninja fashioning a new sword. One scene he's got what looks like a led pipe and an grinder and in the next he's got a perfectly polished sword. The best scene however, is where the American Ninja, wearing a t-shirt and jeans is about to attack the bad ninja castle when he jumps into a convenient hole in the ground and immediately jumps back out in full black ninja gear. OH WAIT! I forgot about the scene when he catches a crossbow arrow in his teeth and stabs the guy next to him with it while it's still in his mouth.

Don't get me wrong, I absolutely love this movie. Nothing like a good chuckle and no brain cells required. I would highly recommend this movie to anyone who loves a good bathos.

Amazon Customer
5.0 out of 5 stars Great Movie
Reviewed in the United States on October 7, 2018
Verified Purchase
This is a great movie, Great Ninja Action with David Bradley and Michael they should have done another movie after this one.
Read more
One person found this helpful
Helpful
Comment Report abuse

mark myers jr
2.0 out of 5 stars At least it's not five.
Reviewed in the United States on June 24, 2019
Verified Purchase
I liked parts two and three the best but this one is just to boring.
Read more
Helpful
Comment Report abuse

Kim
5.0 out of 5 stars Item as described
Reviewed in the United Kingdom on January 23, 2019
Verified Purchase
10/10
Read more
Report abuse

a ellis
3.0 out of 5 stars Three Stars
Reviewed in the United Kingdom on April 29, 2017
Verified Purchase
IT WAS GOOD
Read more
Report abuse

dazb
5.0 out of 5 stars GREAT
Reviewed in the United Kingdom on May 28, 2015
Verified Purchase
I LOVE THE AMERICAN NINJA FILMS PLENTY OF ACTION WELL WORTH AWATCH
Read more
Report abuse
See all reviews