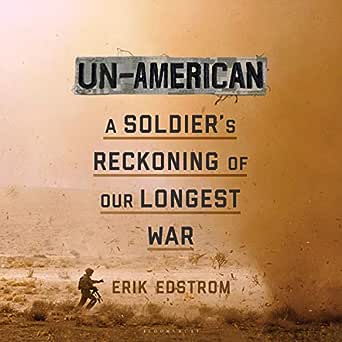 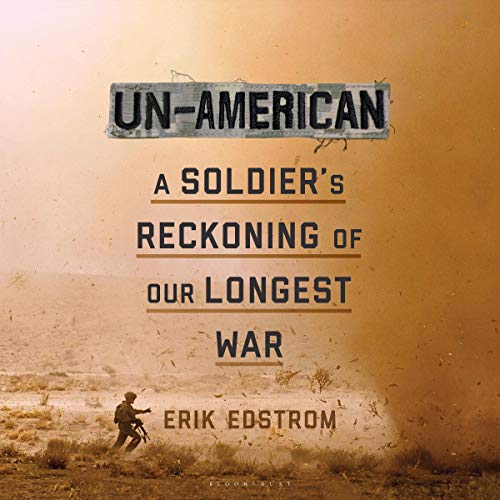 Un-American: A Soldier's Reckoning of Our Longest War

4.8 out of 5 stars
4.8 out of 5
37 global ratings
How are ratings calculated?
To calculate the overall star rating and percentage breakdown by star, we don’t use a simple average. Instead, our system considers things like how recent a review is and if the reviewer bought the item on Amazon. It also analyzes reviews to verify trustworthiness.

Belle Woods
5.0 out of 5 stars A book well worth reading
Reviewed in the United States on May 19, 2020
Verified Purchase
I bought Un-American: A Soldier's Reckoning of Our Longest War not knowing what I was getting into. I just wanted to read a book written by an American soldier about his or her experience in Afghanistan, no other requirements. While I read history books, I’ve never served in the military and have no strong opinions.

First of all, I couldn't put the book down. The writing is brilliant, a clear, no-bullshit retelling of this man’s personal experience. I felt like I was looking into another human soul.

Second, I thank you, Erik Edstrom, for writing with such clarity and honesty about a chunk of your life. I’m guessing you’ll get a lot of flack for writing the book, but you did the right thing. While I can’t personally speak about the military, your experience about the strong human belief in fantasies matches my brutal experience in another area of life. People are strongly attached to big fantasies that define our world, give us a sense of well being and security, and will fight you to the ground if you try to poke a hole in them. Truth telling is a tough thing to do. Thank you for being a good writer and for writing a book worth reading.

DTS@BigIslandRanch
5.0 out of 5 stars A Very Compelling Read
Reviewed in the United States on June 24, 2020
Verified Purchase
Erik Edstrom's Un-American is well-written and well-structured. His descriptions of battlefield action and casualties are as graphic as T. E. Lawrence's in The Seven Pillars of Wisdom.

He asks the reader to do three things when assessing whether a war is good or not: (1) imagine your own death; (2) imagine the other side; and (3) imagine the costs. His conclusion about America's Global War on Terrorism is that our limited financial resources have been over-allocated to a permanent war--which has resulted in under-funding in the areas of healthcare, education and infrastructure.

I co-translated the autobiography of the leader of the attack on Pearl Harbor. Mitsuo Fuchida was a fiercely loyal officer of the Imperial Japanese Navy. After the war, he became an evangelist for peace. He did not disclaim his former role as a warrior, but he was convinced that the Pacific War accomplished little beyond devastation and loss of military and civilian lives. He continued to believe that a strong military was required to control potential enemy nations from starting a war.

Edstrom has made a strong case not against military spending--but against embarking on a policy of permanent warfare that results in over-spending and falls short of achieving policy objectives.

Olympia
5.0 out of 5 stars A powerful book
Reviewed in the United States on June 7, 2020
Verified Purchase
The power of this book lies in its honesty. The author in a very matter-of-fact way describes what it is like to be in a war where you are told you are the good guy, but every day, you discover otherwise. Despite the title "UnAmerican", writing this book was a very American thing to do. The author did it for a greater purpose, the common good, to enlighten us all about the true nature and cost of war.
Read more
6 people found this helpful
Helpful
Comment Report abuse

William R. Nevins
5.0 out of 5 stars Vital reading. Read this book now.
Reviewed in the United States on June 30, 2020
Verified Purchase
This book is vital reading for our present moment. Please get this book and read it now. I read it in three days. Could not stop. I am the "gold star" parent of a heroic US Army Special Forces career soldier (a SFC who did several mission tours in Afghanistan) who was KIA in Afghanistan in September 2013. I have had so many questions about what his life as a soldier was and what it meant. This magnificently written book is helping me to move towards some answers. I hope to read and hear more from this author in future years. We need such true leadership. Highest recommendation of this book.
Read more
4 people found this helpful
Helpful
Comment Report abuse

PH
5.0 out of 5 stars Required reading, especially for elected officials and those thinking about military service
Reviewed in the United States on July 22, 2020
Verified Purchase
I came upon this book through Spoken Interludes, an online meeting forum for authors and readers, and knew nothing about it or the author beforehand. It's a very compelling, well-written book with more than enough facts and first-hand, gut-wrenching, gory details, drawn mainly from the author's West Point schooling and service in Afghanistan, that should make all of us, particularly our elected officials, think many times more about war (political violence, a term the author uses often), the immorality that is often involved, and patriotism. He presents a solid three-pronged framework for thinking about war, which to me stands out for its consideration for the other side of the conflict and the tremendous costs they bear as well. There's a bit more sexual explicitness recounted than may be needed, but it's probably a fair representation of an aspect of the lives of our soldiers in combat and the language they use, and I think more details could have been provided on the Obama administration's drone assassination program. Otherwise, this book should be required reading for young adults contemplating military service, our elected officials, and the public in general, as informed citizens.
Read more
3 people found this helpful
Helpful
Comment Report abuse
See all reviews