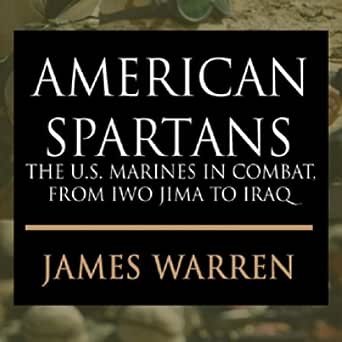 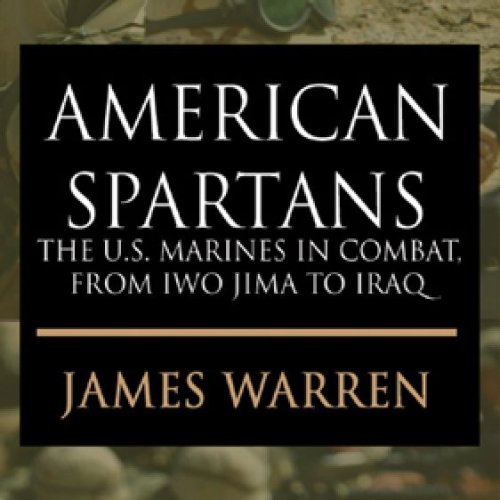 American Spartans: The U.S. Marines: A Combat History from Iwo Jima to Iraq

Free with Audible Plus trial
$0.00

Greg West
5.0 out of 5 stars good
Reviewed in the United States on July 18, 2015
Verified Purchase
Written in a documentary fashion, this is a good book.
It is on the Commandant's reading list and I buy and read these recommended books then mail the nto my son. He is a 3th gen jarhead.

Antiwon T. Sampson
5.0 out of 5 stars Thanks
Reviewed in the United States on February 14, 2013
Verified Purchase
The book is an add to my book collection of books that are on my CMC Reading list. Just like the others on the list it's important to a Marine and I know I will enjoy the read... Thanks for your support...
Read more
One person found this helpful
Helpful
Comment Report abuse

William B. Walters
5.0 out of 5 stars Semper Fi
Reviewed in the United States on September 1, 2017
Verified Purchase
A great book about the Marines and their history.
Read more
Helpful
Comment Report abuse

tim reynolds
5.0 out of 5 stars Get some
Reviewed in the United States on August 21, 2017
Verified Purchase
Too many words, but what can I say war is hell. Thanks!
Read more
Helpful
Comment Report abuse

Ronniehall9352
5.0 out of 5 stars Five Stars
Reviewed in the United States on August 4, 2014
Verified Purchase
A must read for every Marine
Read more
Helpful
Comment Report abuse

Ben Kuhn
4.0 out of 5 stars Good Read
Reviewed in the United States on June 11, 2009
Verified Purchase
The book is overall fairly interesting as it offers a general overview of the actions of America's most elite fighting force. It gets a little dull in parts depending on what area you are interested in but for the most part i enjoyed it and would reccomend it.
Read more
One person found this helpful
Helpful
Comment Report abuse

Mr. Robert C. Bonds
4.0 out of 5 stars Things our nation needs to know about this elite force
Reviewed in the United States on March 19, 2008
How much do we really know about the US Marine Corps? Like many, I knew the basics in that the Corps spearheaded nearly every major battle in the Pacific during WW2. I also was familiar with their victory at Inchon and their yes, victorious retreat from the Chosin Reservoir in Korea. As to their combat history during VietNam, Khe Shan is their most well known battle. Who could not know about the Marines during Gulf War 1 and 2. The embedded media during Gulf War 2 help many know about their exploits in the rapid taking of Iraq.

What most do not know and which Warren brings forth in this book is the deep character that exists within Marine Corps veterans, retirees, and those serving today. It is the character that is taught in their basic training of enlisted and officer personnel that sticks with each and every one who has earned the title of United States Marine.

Warren also highlights the many innovations of the Marine Corps as it literally had to fight tooth and nail for its existence. That's right, in times leading up to WW2, after WW2 and up until the end of the Korean War there were those who sought to disband what is today American's mobile 911 response force.

As to those innovations mostly in the area of warfighting; it was the Marine Corps that developed the amphibious warfare doctrine used from WW2 until today, it was the Marine Corps that first used heliocopters on the battlefield during Korea; and it was the forward thinking of Marine leaders that adapted their organization to changes in the geopolitical world so that America can project its might over 600 miles inland from the coast of any hostile nation.

While at times a bit overly detailed, Warren has drawn on the best sources to compile a solid must read for those who consider themselves military history fans. At the end, one can not help but recognize the leadership buidling that goes on within the Corps and that application of leadership that has made the US Marine Corps an elite organization that we should be proud of.