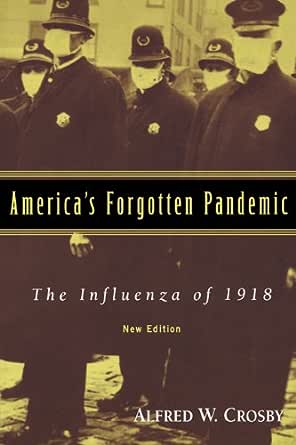 Flip to back Flip to front
Audible Sample Playing... Paused   You are listening to a sample of the Audible narration for this Kindle book.
Learn more
ISBN-13: 978-0521833943
ISBN-10: 0521833949
Why is ISBN important?
ISBN
This bar-code number lets you verify that you're getting exactly the right version or edition of a book. The 13-digit and 10-digit formats both work.

"Crosby will retain his reputation as a senior statesman of the 1918 influenza epidemic, as one of the first to study it comprehensively..." Linda Bryder, The International History Review

"[This] is a definitive account of the 1918 influenza epidemic in the United States. Alfred Crosby has systematically covered the effect of influenza upon the armed forces, major cities, and American territories. Over and above this he has depicted the spread and impact of the disease over a good part of the world." Journal of the History of Medicine

"[This] is a fine, galloping account of the influenza pandemic that killed some 25 million people in less than a year. In some ways it was a page out of the Middle Ages bound in the twentieth century. No plague ever killed so many people in so short a time." Natural History

"Thoroughly researched and rich in detail, Crosby's book carefully narrates the rise and fall of the global pandemic, especially as it affected the United States." Medical History

Tracing the influenza pandemic of 1918–1919 that claimed over 25 million lives worldwide. --This text refers to the paperback edition.

Between August 1918 and March 1919 the Spanish influenza spread worldwide, claiming over 25 million lives, more people than perished in the fighting of the First World War. It proved fatal to at least a half-million Americans. In this vivid narrative, Alfred W. Crosby recounts the course of the pandemic during the panic-stricken months of 1918 and 1919, measures its impact on American society, and probes the curious loss of national memory of this cataclysmic event. In a new edition, with a new preface discussing the recent outbreaks of diseases, including the Asian flu and the SARS epidemic, America's Forgotten Pandemic remains both prescient and relevant. --This text refers to the paperback edition.

Alfred W. Crosby is a Professor Emeritus in American Studies, History and Geography at the University of Texas, Austin, where he taught for over twenty years. His previous books include America's Forgotten Pandemic: The Influenza of 1918, 2nd edition (Cambridge, 2003), Throwing Fire: Projectile Technology through History (Cambridge, 2002), The Measure of Reality: Quantification and Western Society, 1250 1600 (Cambridge, 1997). The Measure of Reality was chosen by the Los Angeles Times as one of the 100 most important books of 1997. --This text refers to the printed_access_code edition.
Read more

4.6 out of 5 stars
4.6 out of 5
272 global ratings
How are ratings calculated?
To calculate the overall star rating and percentage breakdown by star, we don’t use a simple average. Instead, our system considers things like how recent a review is and if the reviewer bought the item on Amazon. It also analyzes reviews to verify trustworthiness.
Top reviews

Randall Parker
5.0 out of 5 stars Great scholarship about a massive yet mostly forgotten tragedy
Reviewed in the United States on February 9, 2020
Verified Purchase
I recently asked half a dozen people in their twenties if they'd heard of the 1918 H1N1 influenza pandemic and none of them had. Globally it killed more people than WWI and possibly more than died in WWII. But hardly anyone knows about it. Yet it could happen again. If you can handle understanding the scale of a threat that could possibly kill tens of millions or more people then read this book. Crosby does an excellent job of sketching out how it played out in such diverse locations as Alaska, troop transport ships heading to Europe San Francisco, Samoa (where a quarantine by US Navy officers kept it out of American Samoa while a foolish New Zealand officer did little to stop it in Western Samoa resulting in a high death toll), And other locations.

Crosby explains the story of how confused biologists were about the cause of influenza up until the early 1930s and how the puzzle was solved.

At the time of this writing we are waiting to see if the Coronavirus outbreak that started in Wuhan China will go global and whether it will kill millions of people or will it even kill tens of millions like the 1918 flu pandemic. I wish more people appreciated the potential scale of the death toll that is possible from a virus that has recently jumped a species boundary into humans. We are not doing enough to protect ourselves from a threat of this type and I expect we will have to learn the hard way that we need to.

Crosby wrote before the isolation and sequencing of the H1N1 virus from buried victims frozen in Alaska permafrost and he makes no mention of the cytokine storm which this virus caused, damaging the body by immune and inflammation response. So you need to read a later book to get a deeper understanding of how this particular virus caused so much damage. But as a story about the events of the pandemic it is quite good.
Read more
64 people found this helpful
Helpful
Report abuse

lisaleo (Lisa Yount)
5.0 out of 5 stars everybody should read this book!
Reviewed in the United States on April 28, 2020
Verified Purchase
If you want to get a step-back overview of the coronavirus/COVID-19 pandemic of 2020 and its attendant social updump, present and possible future, you’d be well advised to read accounts of the 1918 “Spanish” (misnamed; the disease did not originate in Spain) influenza pandemic, which killed some 675,000 Americans and perhaps 21 million people worldwide—and this is a good one. Laura Spinney’s Pale Rider is also good, providing a global perspective, but Crosby’s book focuses on the course of the pandemic in the United States, which is probably what most Americans are chiefly interested in.

The 1918 flu pandemic is the only serious pandemic in anything like “modern” times, and despite their being roughly a hundred years apart and caused by different viruses (the COVID-19 is not part of the flu virus family), the two pandemics and their effects are eerily similar in several ways: the illnesses are both respiratory, both spread in similar ways, and both kill primarily by the same mechanism, almost surely an overreaction of the body’s immune system rather than a direct effect of the virus (though this was not known in 1918). Then, as now, there was no dependable treatment or vaccine, and people tried to slow the disease’s spread by wearing masks and closing down businesses. The differences between the two and their social surroundings are striking and instructive, too: we have the advantage of not being in the middle of a war (the 1918 pandemic overlapped the final battles and peacemaking process ending World War I), but, because the 1918 epidemic came and went so quickly (the whole thing lasted about a year, and the worst of it lasted less than a month), it had far less economic impact than the COVID-19 epidemic seems likely to have.

Crosby’s book shows how the disease started and spread among the military, as soldiers were crowded together and moved around the world as part of the war effort, and also how it affected American civilians and how they reacted to it. He concentrates on the effects in large cities, particularly Philadelphia and San Francisco. In addition, he discusses how the epidemic affected the peacemaking process at the end of the war, the search for the cause of the disease (long assumed to be a bacterium called Pfeiffer’s bacillus, because almost nothing was known about viruses at the time), and why the pandemic had so little impact on collective memory, even for most of the people who lived through it. The book is not overly technical, and its subject matter is bound to be gripping for anyone living in the present medical and social climate. I recommend both Crosby’s and Spinney’s books highly.
Read more
29 people found this helpful
Helpful
Report abuse

lscollison
5.0 out of 5 stars Relevant and revealing
Reviewed in the United States on March 19, 2020
Verified Purchase
As a nurse and historian, I found this book very useful for a project I was working on in college. Interesting and enlightening from an historical aspect and instructive for limiting the spread of disease, mortality, and the burden of disease in present and future pandemics. Very readable. Includes preface, chapter end notes, charts, afterword, and index.
Read more
23 people found this helpful
Helpful
Report abuse

Bookworm
5.0 out of 5 stars Fascinating and chilling
Reviewed in the United States on June 30, 2019
Verified Purchase
This book is extremally well written by one of the leading experts on the 1918 influenza pandemic, I literally had a difficult time putting it down. Extremally well documented, and in my opinion a must read for anyone studying WWI. Reading on this topic- the question screams out- why isn't this episode in history more well known?
Read more
26 people found this helpful
Helpful
Report abuse

bboz
2.0 out of 5 stars Very interesting beginning, the remainder was a slog.
Reviewed in the United States on April 20, 2020
Verified Purchase
The first quarter of the book was fascinating and relevant given today's coronavirus pandemic. Then the book begin to deteriorate into the history of the Versailles conference, various and sundry tactics of World War I with an occasional reference to influenza thrown in and finally a soul-crushgingly boring presentation of statistics. I guess this"filler" is what writers do when they need to fulfill word count requirements to get their books published.
Read more
17 people found this helpful
Helpful
Report abuse

M. Kenny
5.0 out of 5 stars One of the best books on the Pandemic of 1918
Reviewed in the United States on May 25, 2020
Verified Purchase
This book was revised for a second edition in 2003 (originally published in 1989). It contains probably everything you would want to know about the 1918 pandemic and is very thorough in research and notations. Great to read and see how THIS flu was able to kill almost 700,000 Americans in about 1 year. Remember as almost everyone at the time said "it's just the flu". Some stories will sound familiar as we go through the Covid 19 Pandemic 100 years later, the "mask" controversy and the fact that the spread went rampant except in a few places on the earth where "quarantine" or "Lock down" took place weather by choice or by geographic constraints. Excellent book.
Read more
15 people found this helpful
Helpful
Report abuse
See all reviews

D.Armstrong
5.0 out of 5 stars Very interesting read!
Reviewed in the United Kingdom on December 3, 2018
Verified Purchase
Excellent book on the subject and very helpful when I was preparing a lecture on the subject!
Read more
Report abuse

BARBARA M
4.0 out of 5 stars Four Stars
Reviewed in Australia on November 25, 2014
Verified Purchase
Great detailed descriptions of what happened but at times got a bit monotonous.
Read more
Report abuse
See all reviews