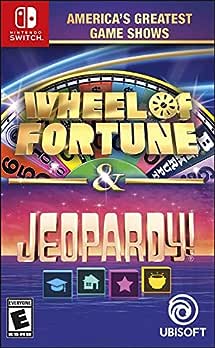 Enjoy an authentic TV show experience with America's greatest game shows: wheel of Fortune & Jeopardy! play anytime, anywhere. Perfect for a family-friendly game night - or challenge yourself against players around the world online.

4.5 out of 5 stars
4.5 out of 5
443 global ratings
How are ratings calculated?
To calculate the overall star rating and percentage breakdown by star, we don’t use a simple average. Instead, our system considers things like how recent a review is and if the reviewer bought the item on Amazon. It also analyzes reviews to verify trustworthiness.
Top reviews

CMY
1.0 out of 5 stars Updated!- Save your money for something that actually works!
Reviewed in the United States on November 5, 2018
Verified Purchase
**Update**- Do NOT let the fact go without notice that any of the reviews here that give above 1-2 stars were completed by Vine Reviewers of a free game! If I got this game for free, the bugs and repeat questions would make me much less angry than they did at a cost of $40. But even for free, I still would not try to play again because this game isn’t worth my time or the irritation! Take out the Vine Reviews and calculate your own average Star Rating prior to purchase and buy at your own risk! The displayed rating is NOT reflective of the pile of dung that this game really is, all thanks to a bunch of free games being given out and reviewers who don’t feel the sting of wasted money as they play a buggy, poorly executed, and lazily coded game. This should tell you all you need to know about this game: My kids love to play on the Switch and basically beg to play after homework and chores are completed. After our first time playing this game, now if I offer to let them play, they ask what game before saying yes. If I mention either Wheel of Fortune or Jeopardy, the answer is an emphatic No Thank You! What kids don’t want to play video games you ask? Kids who have experienced the utter failure of a game this is and don’t want to waste precious play time on something that doesn’t work, that’s who!
I wish I had this purchase to do over again. Thought this would be great to play with the family and we were all so disappointed! Required a large update before play and even then it was still so buggy and full of glitches that we just quit playing after about 10 minutes of trying. The opening videos are jittery and the sound is bad. Then when the game finally opened, there were glitches in the narration. During the tutorial game play, we got to the point where we wanted to solve the puzzle, so you click the solve button and it rings in for you but then just dumps your turn! That was bad enough, but then when we got to the actual game, the sounds between the cut away videos and the actual game were totally off. My kids even said that the volumes were too different, like between a TV show and the cranked up volume on the commercials. This game for the Switch deserves less than a full star!

paranoia2mb
1.0 out of 5 stars Complete failure on the highest level at Ubisoft!!
Reviewed in the United States on October 30, 2018
This game is full of glitches. I can’t believe this made it past quality control at Ubisoft, because this is completely unacceptable for a $40 game. Music and sounds are missing, the rules of the game don’t function correctly—it’s a total mess.

Mind you the PS4 version works just fine. How did Ubisoft manage to mess up an existing game that was fully functioning correctly, where a port to a new system was the only requirement?

EDIT/UPDATE: EARLY CHRISTMAS SHOPPERS: THIS IS A GAME THAT IS NOT WORKING. This game is BROKEN! There is NO GUARANTEE this will ever be patched or fixed! Whomever you are giving it to for Christmas will just be receiving a $40 box that doesn't work correctly. Ubisoft has said NOTHING about fixes and they actually just responded to me saying they couldn't re-create the issues. THIS IS ABSOLUTELY IMPOSSIBLE, THE ISSUES ARE CLEAR AS DAY PRESENT. AVOID! This is outrageous!!!

EDIT/UPDATE 2: Here's a list of all of the issues, in case you're curious about the "wish I could have given zero stars" review!

Missing sounds:
Bankrupt when you land on Bankrupt
1/2 Car Horn when you land on 1/2 Car Tag
Solved puzzle music cue
The iconic "ding" when letters light up blue on the puzzle board
The speed-up music during round 4
The bell sound that should be heard when the final spin graphic is being displayed

Bugs:
The game breaks randomly and the million dollar wedge, prize wedges, 1/2 car tags, and gift tags just stop coming off the wheel after a round or 2--including during the final spin where ALL extras on the wheel should be removed

The wild card and gift tags will re-generate on the wheel not just visually; they can be claimed again and again. This is NOT how the game is played--once these are off the wheel, they are off for the entire rest of that game, with the exception of the 1/2 car tags which should replenish.

Update 1.0.1 (the one that everyone had day 1 that this game came out, which is industry standard at this point), BROKE the flippers. Depending on where the wheel lands, the flipper will register the adjacent wedge, that WAS NOT LANDED ON.

The background lights that flash when you solve a puzzle, at some point just get stuck flashing, even when normal play resumes the next round (it happens in the bonus round as well)

The debounce when hitting buttons is poor or non-existent. There have been many times when you push a button to solve the puzzle, it shows you the screen to start inputting text, but then immediately jumps to the next player to spin, as if you forfeit your solve.

After playing a round, if you want to go into the options to change the prize wedge or the gift tags, the wheel doesn't spin to the correct places, so you cannot see the changes you are making.

These are not only found by myself. Tickets have been opened with Ubisoft again and again reporting these game-breaking bugs. Forum posts have been made with zero resolution. The game has been out for weeks with these reported bugs and not a peep or update from Ubisoft. If you search twitter for #wheelonswitch you can see just about all of the above issues captured in action.

Amazon Customer
4.0 out of 5 stars Fun game, but pretty bare-bones
Reviewed in Canada on September 19, 2020
Verified Purchase
Both the jeopardy and wheel of fortune parts of this game are quite fun most of the time, and I overall I am happy with my purchase. It does offer a fun game experience with family, and I especially appreciate the “quick” modes that are available for both game shows. However, the game is not perfect.

One critique I have is that these games feel very low budget, bordering on lazy. For example, all the customization options for wheel of fortune are very superficial, like changing your character’s hair or the appearance of the set. From what I have seen you are not able to customize the frequency different categories show up, the difficultly level, or the makeup of the wheel itself (ie. more/less bankruptcy spaces). Just little gameplay customization things like that could help keep the game fresh and interesting.

Another one of the issues I have with this game is that it feels extremely American. Yes I know the game is called “America’s Greatest Game Shows,” and of course I was expecting lots of red white and blue and all that, but the extent of the American focus in the GAMEPLAY still surprised me. I understand that the game shows this is based on are American, but for an internationally released video game, it feels a little excessive. For example in Jeopardy, there are way more categories than I expected that focus on American history and geography.

While you can opt out of entire areas of questions (eg. academics, pop culture), it does not seem to be possible to opt out of/reduce the number of American centric ones (eg. some type of international mode), which I think is a missed opportunity. With just a little bit of effort I feel like they could have really improved the experience for non-American players, and given the simplicity of other aspects of the Jeopardy game I don’t think a few extra replacement question categories (or even just more detailed customization options) is too much to ask.
Read more
Report abuse

TP
2.0 out of 5 stars Cheaper at Walmart
Reviewed in Canada on January 10, 2019
Verified Purchase
This game is 1/2 this price at Walmart, I returned and purchased it there. Great game!
Read more
One person found this helpful
Report abuse

Amazon Customer
4.0 out of 5 stars Good for kids too
Reviewed in Canada on July 11, 2019
Verified Purchase
Great game for my kids to work on the critical thinking and spelling skills
Read more
Report abuse

Kim Baker
5.0 out of 5 stars Great game
Reviewed in Canada on January 12, 2019
Verified Purchase
I bought this for a Xmas gift for my son and we have played and it;s a whole lot of fun.
Read more
Report abuse
See all reviews

Page 1 of 1 Start overPage 1 of 1
This shopping feature will continue to load items when the Enter key is pressed. In order to navigate out of this carousel please use your heading shortcut key to navigate to the next or previous heading.
Back
Next
Pages with related products. See and discover other items: switch game, switch nintendo games, nintendo switch with game, Nintendo Switch Games for Kids, nintendo switch games under 20 dollars