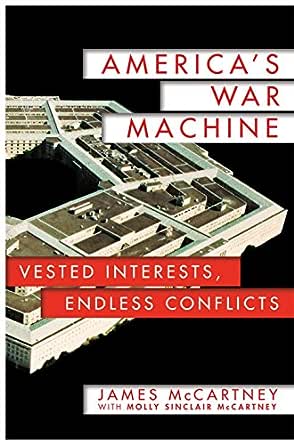 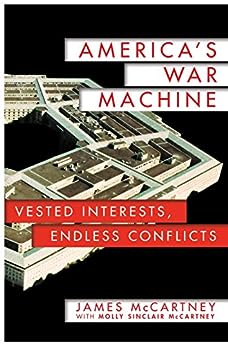 "The McCartneys' book provides a crisp, clear analysis of the state of the Military Industrial Complex more than 50 years after Eisenhower and his advisors coined the term. The authors deploy dozens of examples to make their case that unfortunately, the Military Industrial Complex is alive and well, with an outsized role in determining not only how much to spend on the Pentagon, but also on whether the country is at war or at peace.... [T]he most complete treatment of the topic I have read in many years." ―William Hartung, huffingtonpost.com

"A concise, compelling account of how what President Eisenhower called the 'military-industrial complex' became an omnipotent force in our government....[W]ell informed." ―Tallahassee Democrat

"[A] riveting account of America's defense establishment over the past half-century.... This sobering yet essential account of the defense industry is for anyone curious about the evolution and influence of our contemporary military industrial complex." ―Library Journal

“With industry at the wheel and an appetite for oil still driving conflicts in the Middle East as if nothing has changed in 50 years, Congress gorges on pork while think tanks and the news media agitate for war.” ―Publisher's Weekly

“For 35 years as a Washington journalist, McCartney's analysis of the American War Machine has spotlighted the difference between national defense and Congressional pork …This book unmasks the dubious top-secret stamps hiding waste and draining American taxes.” ―Patrick J. Sloyan, Pulitzer prize-winner and author of The Politics of Deception

“James McCartney…provide[d] some of the American press' most dispassionate and insightful coverage of war and America's war making machinery at all levels -- executive, legislative and judicial.” ―Bill Kovach, author ofThe Elements of Journalism and former Washington Bureau Chief for the New York Times

“Jim McCartney…never lost his obsession with the power of America's political and industrial "war machine" to drive U.S. policy no matter who was president. It was his passion.” ―Robert Boyd, Pulitzer Prize-winner and former Knight Ridder Washington bureau chief

“Nobody knew the inside of the great Washington machine better than Jim McCartney. His knowledge, fortified by the perceptive reporting and graceful, sensitive writing of Molly Sinclair McCartney, makes a compelling combination in this essential book.” ―Thomas W. Lippman, author of Saudi Arabia on the Edge and former Washington Post national security correspondent

“You knew, if you were a government spokesman, that you'd better have it straight and you'd better have the facts, because he'd keep coming at you…He was not there to enhance the government. He was there to inform the people. I didn't know anyone I respected more than Jim.” ―Hodding Carter, former Assistant Secretary of State for Public Affairs and State Department spokesman

“One of Knight Ridder's very best journalists… [he] knew the ins and outs of Washington better than anyone.” ―Tony Ridder, chief executive officers of Knight Ridder from 1995 until the 2006 sale of the company to McClatchy

“I can think of nobody better qualified to make the case this book makes than Jim McCartney and Molly Sinclair McCartney…This book reflects his experience, his judgment and his passion [and]…Molly Sinclair McCartney… was the perfect person to finish the job.” ―Larry Jinks, former senior vice president for news at Knight Ridder (now McClatchy)

JAMES MCCARTNEY had covered every president from Dwight D. Eisenhower to Bill Clinton. McCartney covered the White House, the State department, the Pentagon and relevant committees on Capitol Hill. He reported from about 30 countries, including Vietnam, the Soviet Union, the Middle East and Europe. After retirement from daily journalism, he taught courses in foreign policy and politics at Georgetown University. McCartney's papers, including about 4,000 of his articles, are in the Special Collections Research Center at Georgetown University's Lauringer Library.

MOLLY SINCLAIR MCCARTNEY worked as a newspaper reporter more than 25 years, including 14 years at the Washington Post. In 2012 she was appointed a Woodrow Wilson Public Scholar in Washington D.C. to do the research and interviews needed to finish America's War Machine.