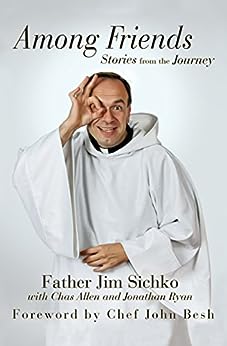 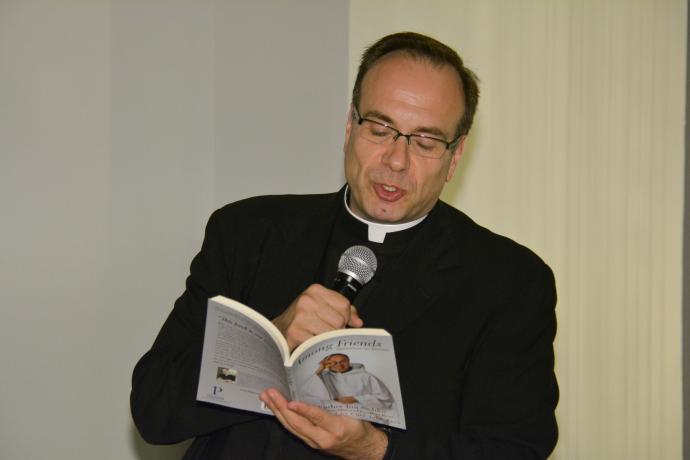 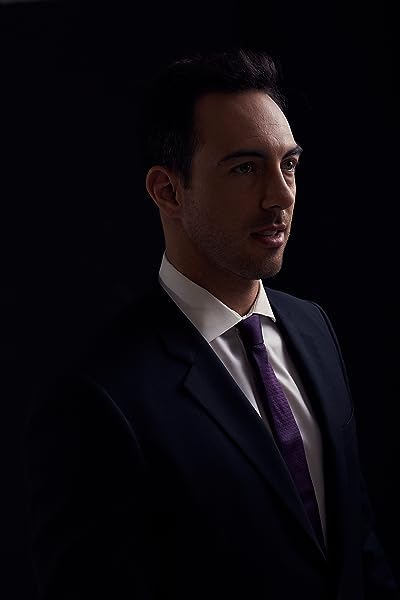 Among Friends: Stories from the Journey Kindle Edition

by Jim Sichko (Author), Jonathan Ryan (Author), Chas Allen (Author), John Besh (Foreword) & 1 more Format: Kindle Edition
See all formats and editions
Sorry, there was a problem loading this page. Try again.
A priest’s inspiring story of bringing people together and bringing them closer to God—with some help from Dolly Parton, Martin Short, and others.

This book is my Midrash. With these words, Father Jim Sichko draws us into a life story full of laughter, tears, and service, filled with insightful lessons gained during his many travels as a clergyman and motivational speaker. Whether recounting his sobering flying experiences, the time he met the pope, or his encounter with the “Weed Man,” Father Jim instructs through powerful storytelling.

As he takes us along on his journey, from getting kicked out of seminary to hosting celebrities—including Dolly Parton, Harry Connick Jr., Martin Short, and former first lady Laura Bush—at his small Kentucky parish, Father Jim shines a light into the corners of the human heart to expose our need for God and the love He alone can give. With humor and striking honesty, Father Jim reveals what it means to worship God, have compassion for others, and live life among friends.
Read more
Previous page
Next page

“You are a wonderful host! Thank you for your warm welcome and for your many kindnesses. You made a memorable day for me and I thank you!” —Laura Bush, former first lady, on A Day Among Friends --This text refers to the paperback edition.

Father Jim Sichko is a priest of the diocese of Lexington, Kentucky. He was ordained to the Ministerial Priesthood of Jesus Christ on May 23, 1998. He travels throughout the United States giving missions, retreats, and days of recollection. Known for his storytelling, Father Jim weaves everyday life experiences with the rooted messages that lie within the Gospel. He is booked for speaking engagements through 2015. Each engagement lasts a minimum of three days and averages three thousand people per night. Father Jim completed his undergraduate work at New England Conservatory of Music in vocal performance and received a master of divinity degree from Sacred Heart School of Theology. --This text refers to an out of print or unavailable edition of this title.

Martha Spicer
5.0 out of 5 stars Best book I’ve read in a while
Reviewed in the United States 🇺🇸 on August 29, 2022
Verified Purchase
I loved this book it’s funny shows how we all are the same and all need to work on being our best I love father jim
Read more
Helpful
Report abuse

Susie Kay
5.0 out of 5 stars Engaging Story of an Ongoing Journey
Reviewed in the United States 🇺🇸 on June 12, 2014
Verified Purchase
Among Friends is a very engaging story of a young priest and the experiences he has had. There is humor, there is sadness, but overall, the reader is left with a sense of joy and belief in the power of faith in a loving. God. The book is not preachy, but draws one into Father Jim's adventures and yes, misadventures. He admits to driving very fast as he is always in a hurry to get to his next event or trip. He thus meets many policemen and highway patrolmen!
I have had the opportunity to know Father Jim from his childhood and later as my student. He truly is a wonderful person who genuinely loves his fellow man and sees the best in people. He also has a great sense of humor and does not take himself too seriously.
This is a gem of a book which makes one reluctant to see it end. However, there was am implication at the end of the book that there were more stories to share. Hopefully, there will be a sequel one day.
Read more
7 people found this helpful
Helpful
Report abuse

Heather Marsten
5.0 out of 5 stars Heartwarming and loving
Reviewed in the United States 🇺🇸 on June 6, 2014
Verified Purchase
Father James Sichko shares his stories of faith - his strengths and weaknesses. As he literally speeds through life (befriending State Troopers), he shares the love of God. His stories of family, coming into the priesthood, ministering on the spot, and the wonderful coincidences that God provides as we walk through life inspired and encouraged me. He lets us know that God knows we're human and fallible. Father Sichko shows his human side - for example, when he doesn't want to be bothered like on a plane, and how God uses those those incidents to humble him and remind him that we are to be servants of Christ at all times. I plan to try the Father James Starbucks coffee (his recipe sounds intriguing) - Curious what my local Starbucks will do with it. It was a pleasure to read this book and it gave me plenty to think about. I highly recommend it.
Read more
3 people found this helpful
Helpful
Report abuse

Reconciled To You
5.0 out of 5 stars Storytelling at its best!
Reviewed in the United States 🇺🇸 on May 25, 2015
Verified Purchase
There are many words to describe Fr. Jim Sichko's book... they sort of describe him as well. Funny, Insightful, and passionate. Storytelling is a brilliant way to share one's faith - it is not so much a treatise of theology as a much as a opening of one's life to see what God has done. It is hard to argue with a person's life story - believe what he does or not, one can not miss something amazing at work in the world around this devouted Priest. This story is not just about him -- Fr. Jim shares the remarkable stories of God working in those people he meets, some in the most unlikely circumstances and situations.

Sit back or curl up, grab a beverage of choice, and enjoy some of the best storytelling I've had the privilege to read!!
Read more
5 people found this helpful
Helpful
Report abuse

flavsfan
5.0 out of 5 stars A fun, thoughtful book
Reviewed in the United States 🇺🇸 on June 13, 2014
Verified Purchase
I really enjoyed this book and found it easy to read and engaging. Father Sichko does a very good at taking common, everyday situations and applying a gospel message to them. Hedoes this in a way that is not preachy or condescending.

I am usually turned off by most religious books they are quite presumptive about the reader. However, this book assumes nothing. A reader might not even be Catholic but yet will likely identify with this book and the stories. I encourage anyone who is interested in a Christian perspective in a modern world (this book is very up to date) to take some time with this book. It can be read in a few sittings or read piecemeal or in bits as the reader would like. In fact, the author suggests the read take some time between chapters to contemplate the stories.
Read more
2 people found this helpful
Helpful
Report abuse

Chris from Cleveland
5.0 out of 5 stars Equally hilarious and poignant at the same time
Reviewed in the United States 🇺🇸 on August 10, 2014
Verified Purchase
Father Sichko has an engaging style that draws the reader in as if he (or she) were sitting before him as he tells his colorful and inspirational adventures about some well known celebrities, as well as the other meaningful people he has met. Fr. Sichko is candidly honest in revealing his own weaknesses and in doing so paints a hilarious picture as the time he was on a plane and his fear of flying got the best of him. As the plane hit turbulence, Fr. Sichko grabbed onto whatever was near which happened to be the hair of the woman sitting in front of him and he screamed out loud! Yet beyond these comical moments are many words of true inspiration and wisdom that come from someone who's seen both sides of life.
Read more
One person found this helpful
Helpful
Report abuse

GMA
5.0 out of 5 stars Delightful
Reviewed in the United States 🇺🇸 on March 25, 2014
Verified Purchase
After I received this book, I read it from cover to cover without putting it down. One learns a bit about God through the warm example of a priest who gives as Christ does. Fr. Jim shares the fruit of his ministry, family, and friendship. It's a pleasure to walk with him during his struggles and passions of his vocational calling. Along the way, one sees Grace evident in Fr. Jim's life and feels refreshed and humbled to share in his journey. From Bill Cosby to Mother Theresa, Fr. Jim passes those touching moments in his life in a very unselfish way. I am thankful for this work of his and look forward to any future projects.
Read more
8 people found this helpful
Helpful
Report abuse

emily quaye
4.0 out of 5 stars GREAT READ!
Reviewed in the United States 🇺🇸 on June 19, 2014
Verified Purchase
I really enjoyed reading the book. Although my intention was to read each story over a period of time, I found myself reading multiples at a sitting and since it was on my kindle checking to see how many pages are left in the book. My hands down favorite was the mouse trap, everyone in the family had to hear it both for the humor and the morale. I am also thinking of incorporating "among friends in my Presbyterian church. I recommend it for both young and old readers
Read more
Helpful
Report abuse
See all reviews
Report an issue
Does this item contain inappropriate content?
Report
Do you believe that this item violates a copyright?
Report
Does this item contain quality or formatting issues?
Report