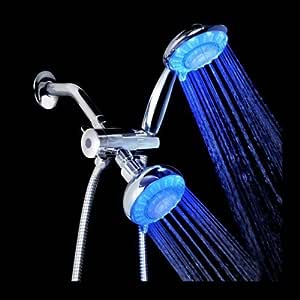 by Ana Bath
3.6 out of 5 stars 202 ratings
Available at a lower price from other sellers that may not offer free Prime shipping.

3.6 out of 5 stars
3.6 out of 5
202 customer ratings
How does Amazon calculate star ratings?
Amazon calculates a product’s star ratings based on a machine learned model instead of a raw data average. The model takes into account factors including the age of a rating, whether the ratings are from verified purchasers, and factors that establish reviewer trustworthiness.

B. Pearce
5.0 out of 5 stars I did not know a shower could be this nice.
Reviewed in the United States on November 12, 2011
Verified Purchase
My old (and mineral encrusted) handheld shower head that came with the house finally exploded last week, giving me the perfect excuse to buy a fancy new LED showerhead! This is the one (or rather, the two) that I chose, and I am glad I did!

Reasonably easy. Plenty of thread-sealing tape is included. The instructions say to use wrenches to tighten the connections. All a wrench did for me was allow me to overtighten the connection onto the shower pipe and pop a gasket out of place, forcing me to take it back off and retrieve the gasket from inside the shower pipe. I suspect I caused additional damage too, as the entire assembly rotates a bit too easily on the shower pipe if I bump it. No leaks though. Will probably fix with Gorilla tape or something :D

Both shower heads are identical as far as spray patterns. You can direct water to either head alone or to both heads at the same time. I have high water pressure (~75 PSI) and notice a definite but not dramatic increase in output pressure when using one head versus both. There are 3 rings of nozzles. From inside to outside, the number of nozzles increases and stream size/pressure decreases. There are 5 Spray patterns which allow you to use any of the 3 nozzle rings independently, or you can combine the outermost ring with one of the inner rings. You cannot, however, have water coming from all nozzles at once or use just the two inner rings.

The flow in all spray patterns is amazingly straight and even, though I suspect this is the case with all new shower heads that haven't had time for mineral buildup. The middle setting (outer nozzles only), is the most gentle and evenly distributed shower I have ever experienced.

The LEDs are all blue. The brightness of the lights is directly and immediately linked to the water pressure since that is what powers them. In my shower (~75 PSI water pressure at the pipe) switching from two heads to one head does not make them any brighter, so I suspect there is some circuitry to prevent overloading the LEDs. If you have low water pressure, they may not reach their full brightness with both heads on, and they might even flicker a bit. For me, one head flickered on certain spray patterns but only during the first few minutes of use on day 1. Now, the lighting is constant. I just wish they had a red option as it would not affect night vision as much as blue.

Edit [March 16, 2012]: The shower heads are still in great condition and the LEDs are going strong. The water output is still mostly straight, despite the high mineral content of my water!

Edit [October 17, 2014]: My showerheads are nearly 3 years old now. Earlier this year, the LEDs stopped working in both shower heads within a few months of each other. This was most likely caused by mineral deposits "gumming up the works". I have not bothered Ana Bath about this because I got over the novelty of having light-up showerheads a long time ago and now I'm just happy to be able to shower in the dark again. The individual nozzles get clogged more often now, and require more massaging to clean them out, but it isn't a big deal yet. I expect to get many more years of use out of these showerheads.

Edit [January 28, 2019]: Things remained about the same for 4 years since my previous update, then the lower head began leaking from its ball joint, emitting a small water stream back toward the wall. It only got worse with time, so I rotated the diverter valve to send water only to the handheld head and this prevented the leak. It is only a matter of time now before I buy new shower heads, and I am definitely not choosing blue LED models next time.

Kent Davis
5.0 out of 5 stars Unique product with GREAT customer service
Reviewed in the United States on January 7, 2015
Verified Purchase
I've purchased two of these showerheads (March 9, 2013 + June 15, 2013). I base my review on regular use of both showers (for 21 months + 18 months respectively).

The LED lighting effect is eye-pleasing and practical. After using it in my home I liked it so much I added one to my luxury rental home to share the unique experience with guests. They love it!

This is a high quality unit, similar to $40 products like HotelSpa® Ultra-Luxury 30-setting 3-way Rainfall/Handheld Shower Combo (and priced even higher at retail stores). To me, the LED lighting is well worth the extra money.

But what I truly appreciate is their GREAT CUSTOMER SERVICE. The LEDs in my 2nd unit failed after 14 months. I emailed customer service on a Sunday morning. Within a few hours ANA BATH replied, requesting my invoice. I sent that and immediately received confirmation that replacement heads would be shipped the next day, at no charge. Most electronic products have limited warranties...and for products more than a year old replacements are rarely offered.

After 21 months, one LED head failed in my first unit. Again I emailed ANA BATH (again on a weekend). Again I received confirmation that they will immediately ship a replacement head. No hassles, no complaining, just GREAT support for their product.

NOTE ABOUT NEGATIVE REVIEWS - This is a mechanical device, so naturally it can fail. I never had any issues with noise, only the eventual failure of the tiny spinning generator. But I did notice that many of the negative reviewers NEVER BOTHERED TO CONTACT THE COMPANY. My experience is that if they had, they'd be happy. This is a company that stands behind its unique product.
Read more
9 people found this helpful
Helpful
Comment Report abuse

SyrslyTwitch
3.0 out of 5 stars Amazing build quality, but one of the heads lost lights after 1 week of use.
Reviewed in the United States on March 2, 2019
Verified Purchase
The lights on this are bright enough that you can see them in a fully lit room and you can take a shower in the dark (but don't blame the shower head if you trip/fall). The water pressure is pretty good, and the tube is long and extremely flexible and feels very lightweight (but NOT in a cheap way). Easy to install with the washers preinstalled and very easy attachment points. Feels premium... which is expected for the price, sure, but it's the kind of product I never expect to see done well.

Unfortunately, about a week into its use, the handheld shower head lost its lights. The LEDs no longer turned on at all. After many months of use, the other head's lights are still functional, but without them both working, it's just not as bright and not as easy to use in the dark, which was one of the reasons we got it.
Read more
One person found this helpful
Helpful
Comment Report abuse

MayBelle10
2.0 out of 5 stars Disappointed overall
Reviewed in the United States on September 14, 2016
Verified Purchase
I actually own two of these, one for each bathroom. I purchased both from amazon. I read a lot of the reviews on here, especially after one of the showerhead lights stopped working. One of my showerheads is a little loud, but I let it go because that's something people commonly reported, but it knocked off a star for me. Then, one showerhead stopped working, and I tried the soaking in CLR, but that didn't work, and since I am about two years over my purchase date (and these were already sort of expensive compared to competitors) I let it go. About two weeks later, the second showerhead in the set stopped working, so I contacted Ana Bath through their website. Someone got back to me very quickly (less than 24 hours), and stated they would talk to their manager (or supervisor) and if I could give them my order number and a couple other details someone would get back to me. Its been a week and no one has gotten back to me, so I took off another star. At this point I should probably buy another set, but for a showerhead whose lights are going to go out in less than 3 years, and one that still makes a loud noise, the cost is not worth it.

This review gets 2 stars because the lights were pretty and the water flow is decent. But the only reason I chose this was because of the lights, and if those aren't working, this is just an over priced showerhead.
Read more
3 people found this helpful
Helpful
Comment Report abuse
See all reviews from the United States

Page 1 of 1 Start overPage 1 of 1
This shopping feature will continue to load items when the Enter key is pressed. In order to navigate out of this carousel please use your heading shortcut key to navigate to the next or previous heading.
Back
Next
Pages with related products. See and discover other items: dual shower head with handheld, double shower head, shower install, bath and shower combo, bathroom shower combo, Explore lighted shower heads for bathrooms