The Anchor is the Key and millions of other books are available for Amazon Kindle. Learn more 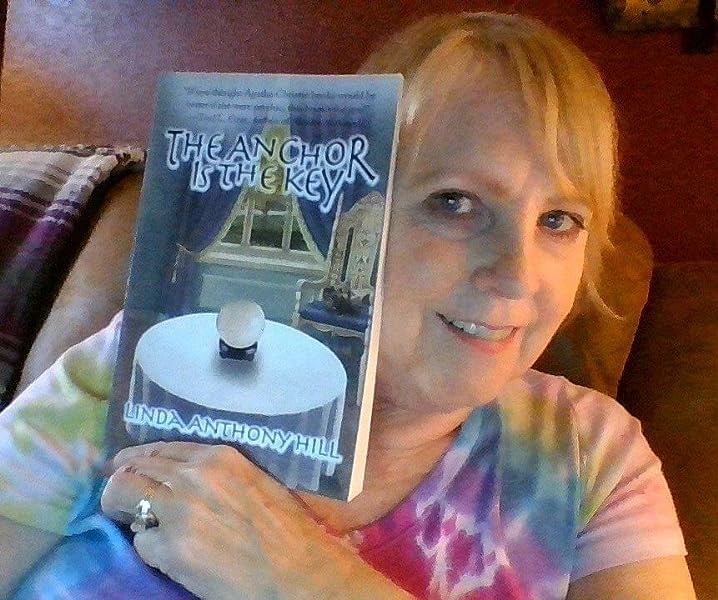 by Linda Anthony Hill (Author)
4.6 out of 5 stars 63 ratings
See all formats and editions
Sorry, there was a problem loading this page. Try again.

Celeste leads a quiet life as a psychic in a small town. That is… until she is drawn in to a haunting murder investigation. A sweet little old lady client has started spreading the word that Celeste is not only psychic but she is also a healer. She has no desire to be a healer, but now her phone is ringing non-stop. And to top it all off, she seems to have adopted a ghost who has no idea how long he has really been dead.

This is really a light, fun read. Celeste gets into some tight situations, but the book is not some kind of horror book. It's an enjoyable ghost story with a few twists and turns to keep it interesting. I own a haunted house called Hill House Manor with my husband, Del Hill.  A lot of my stories are inspired by tales from paranormal investigators who've had experiences at the house. The Anchor is the Key was built around the haunted house I own and the haunted town I live in. I hope you enjoy it.

Start reading The Anchor is the Key on your Kindle in under a minute.

Award winning author, Linda and her husband Del own the infamous Hill House Manor in Gainesville Texas. You may have seen it on My Ghost Story or Real Housewives of Dallas or other shows. Born in Sanford, Florida, her family moved to Daytona Beach before Linda started grade school. It was a wonderful city to grow up in and Linda had the opportunity to meet people from around the world.

She was a published poet before she started High School. Writing took a back seat to travel and then family until she was in her fifties when she decided to publish a book about her and her husband's haunted house. &quot;Hill House Manor: The Guest Book&quot; is available on Amazon.

Then she was inspired by her grandson, who was afraid of ghosts at the time, to write a ghost story for children age 8 to 12. You'll find the &quot;Branden's Ghosts&quot; series for sale here on Amazon.

In 2014 Linda decided to get serious. She joined a writers club and was challenged to write over 20 ghost stories. She found an audience on Facebook. She was further challenged to write a novel incorporating ghost stories with the paranormal and psychic to evolve into a murder mystery. &quot;The Anchor is the Key&quot; is available here on Amazon in paperback and Kindle version. The novel, published in 2017 by Black Rose Writing, has received two awards for excellence in literary fiction.

The next book in the Madam Celeste Mysteries series is called The Spider House. It's a paranormal cozy mystery, but it has it's scary moments. You won't need a xanax, but a glass of wine might be in order. :)

In early 2020 Linda released a collection of ghost stories inspired and influenced by Hill House Manor. It's called Hill House Manor: 13 Ghost Stories. It's quite popular and available both on Amazon and in person at Hill House Manor, which is open for investigation by reservation only 7 nights a week. You can find info on the internet.

Did you know you don't need a Kindle to read Kindle books? There's a free Kindle app for your phone and computer.

Linda's books include 3 non fiction books. One is about Hill House Manor. One is about bookkeeping for authors and one is a self-help, make your life better, and more fun book(Finding UP)

Linda lives in Texas with her husband Del. She is retired from Dental Technology and spends her time working on her next book and enjoying her 3 grandsons and, of course, giving tours of the infamous Hill House Manor.

4.6 out of 5 stars
4.6 out of 5
63 global ratings
How are ratings calculated?
To calculate the overall star rating and percentage breakdown by star, we don’t use a simple average. Instead, our system considers things like how recent a review is and if the reviewer bought the item on Amazon. It also analyzes reviews to verify trustworthiness.

CozyreadersTop Contributor: Cooking
5.0 out of 5 stars An Excellent Paranormal Murder Mystery For Everyone.
Reviewed in the United States on May 28, 2018
Verified Purchase
Celeste is a psychic with a master's degree. She is very happy in her life. She lives alone with her cat, Chaos and runs a psychic reading business from her home...that is it was a peaceful and organized lifestyle until the day she found a boat.

Suddenly, as crystal balls come rolling to her feet, runes and cards predicting changes, Celeste's life begins swirling with intrigue. Accidents may be murders, heart attacks just might be murders, and there is extreme activity of a paranormal bent in a local warehouse. On a personal note, Celeste isn't living such a solitary life either. A new assistant pops up, gentlemen want to take Celeste on horse back rides, and dinner and...just what is going on?

Just why are these spirits upset about? Can a murder be not a murder? Can Celeste be in danger? You will have to read this book to find out. As for me? I was able to literally flow through this book. The dialog, introduction of characters, questions posed kept me turning the pages without even realizing it. I hope this book is the beginning of a long series. Murder at it's best.
Read more
One person found this helpful
Helpful
Report abuse

Pamela R Mitchell
4.0 out of 5 stars Fun psychic cozy mystery
Reviewed in the United States on September 27, 2018
Verified Purchase
An enjoyable read that kept me entertained and intrigued from the first page to the last with compelling characters, a good mystery with twists and turns, small town vibe and paranormal elements. I really liked psychic Celeste and her dynamic with the other folks in Gloryville, Texas.

This is the first book I have read by Linda Anthony Hill and I look forward to reading more from this talented author. I received a complimentary copy of this book from the author via Cozy Mystery Review Crew and this is my voluntary and unbiased review.
Read more
One person found this helpful
Helpful
Report abuse

Betsy
5.0 out of 5 stars Very interesting!
Reviewed in the United States on May 9, 2019
Verified Purchase
I usually don't choose books that involve the paranormal but this was a book club selection so I gave it a try. I was surprised how interesting and entertaining it was. Nice story line and the author did a good job showing the link between characters.
Read more
One person found this helpful
Helpful
Report abuse

Verna Sherrer
4.0 out of 5 stars Really enjoyed this book
Reviewed in the United States on February 12, 2018
Verified Purchase
I really enjoyed this book. It was an easy read and was good at keeping my attention. I will be looking for more of the same.
Read more
2 people found this helpful
Helpful
Report abuse

Julie D Fleeman
5.0 out of 5 stars What’s next for Celeste?!
Reviewed in the United States on January 28, 2019
Verified Purchase
Loved this book! I need more! Well written and thought out while the attention to detail and storyline keeps you pulled in! Also Norman can suck eggs! 100% more please!
Read more
One person found this helpful
Helpful
Report abuse

Tina
5.0 out of 5 stars You won't put it down.
Reviewed in the United States on February 11, 2018
Verified Purchase
I loved the main character and loved seeing through her eyes. The world she inhabits is enthralling and I couldn't put it down. A rainy afternoon read that left me sad that I had reached the last page.
Read more
2 people found this helpful
Helpful
Report abuse

Druecilla
5.0 out of 5 stars Watch out for the ghosts
Reviewed in the United States on May 18, 2018
Verified Purchase
A very fun read with great characters that are surprising even the ghostly ones. There are plenty of plot twists and these keep you turning pages.
Read more
One person found this helpful
Helpful
Report abuse

Deb Gully
5.0 out of 5 stars Interesting storyline and lots of fun!
Reviewed in the United States on February 17, 2018
Verified Purchase
I thoroughly enjoyed this book. Once I started, I didn't want to put it down, and finished it the same day (I'm a fast reader!) I always like a mystery, but the added layer of Celeste's work as a psychic made it even better. The spirits and their different personalities added more depth as well. I hope there's going to be more from Celeste to come.
Read more
One person found this helpful
Helpful
Report abuse
See all reviews
Back to top
Get to Know Us
Make Money with Us
Amazon Payment Products
Let Us Help You
EnglishChoose a language for shopping. United StatesChoose a country/region for shopping.
© 1996-2021, Amazon.com, Inc. or its affiliates