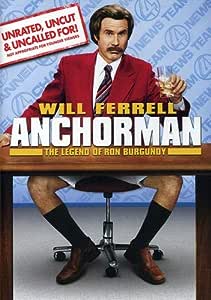 $5.16
& FREE Shipping on eligible orders. Details
Sold by: Toyarcade
$1.55
+ $3.99 shipping
Sold by: centralvalleybooks
Have one to sell?
Sell on Amazon

Will Ferrel (Old School, Elf) is Ron Burgundy, a top-rated 1970's San Diego anchorman who believes women have a place in the newsroom - as long as they stick to covering fashion shows or late-breaking cooking stories. So when ron is told he'll be working with a bright young newswoman (Christina Applegate) who's beautiful, ambitious and smart enough to be more than eye candy, it's not just a clash of two TV people with really great hair - it's war! Filled with wicked wit and slapstick humor, Anchorman is the year's most wildly irreverent, must-see comedy hit!

4.6 out of 5 stars
4.6 out of 5
8,054 global ratings
How are ratings calculated?
To calculate the overall star rating and percentage breakdown by star, we don’t use a simple average. Instead, our system considers things like how recent a review is and if the reviewer bought the item on Amazon. It also analyzes reviews to verify trustworthiness.

Anne P. Mitchell
HALL OF FAME
5.0 out of 5 stars SO Much Better than You are Probably Expecting!
Reviewed in the United States on August 2, 2016
Verified Purchase
First, let me say right up front that I am *not* a Will Ferrell fan, generally speaking (although I am a Steve Carell fan, and a Christina Applegate fan - actually it was this movie that made me into a Christina Applegate fan).

When people who haven't seen Anchorman think about what they think they know about the movie, they think raunch, and Will Ferrell-stupid.

In reality, while there is some raunch (although not much at all) this is a *very* funny movie, with a lot of heart. It is, in the end, a love story, and a story about redemption - wrapped in lots of slapstick comedy, and also verbal humour.

The cast of Steve Carell, Paul Rudd, Christina Applegate and, yes, Will Ferrell, is just perfect casting. Also watch for cameos by Vince Vaughn and Ben Stiller, among others.

I *LOVE* watching this movie with someone whose expectations are pre-set based on what they know of Will Ferrell and what they think they know about the movie, because to a one (and I've watched it with several such people) they have said things like "I have to admit that I liked it much better than I thought I would" or "I have to admit I expected not to like it, but I really enjoyed it!"

So, if you are on the fence about this movie, get off the fence, and watch it. You'll be glad that you did!

IF YOU ARE AN ANIMAL LOVER *READ* THE BELOW SPOILER!!

Seriously, I mean it, there is a spoiler below, so stop reading now if you don't want to read the spoiler, but it only is a tiny spoiler, but will mean a LOT to animal lovers.

You have been warned!:

There is a scene where a dog gets punted off a bridge into a river. You are *certain* the dog has died. The dog has not died, and in fact makes a comeback towards the end of the movie.

joel wing
TOP 500 REVIEWER
5.0 out of 5 stars The shinning star of Ferrell's career that also deals with sexism in the workplace
Reviewed in the United States on June 24, 2020
Verified Purchase
Anchorman will always go down as one of Will Ferrell’s greatest comedies. His success was in part due to working with director Adam McKay and producer Judd Apatow. Ferrell and McKay also wrote the script. Together they were able to create a whole fantasy world in 1970s San Diego based upon Ron Burgundy (Ferrell) the top newscaster in the city and his news team made up of Paull Rudd as reporter Brian Fantana, Steve Carell as weatherman Brick Tamland and David Koechner as sportscaster Champ Kind. They are on top of the world when they have to deal with Christina Applegate as Veronica Corningstone. Not only does she disrupt the male dominated world of the news cast but starts an affair with Burgundy and wants to become an anchor as well. The story is about the struggle between her aspirations and the news team’s sexism.

What made the movie so good was the ridiculous situations they created. For instance, each one of the team introduces himself with Brick saying people seem to like him because he’s polite and is rarely late and years later a doctor will tell him that he’s mentally retarded while he puts mayonnaise into a toaster. Another time the team is asking Burgundy what it feels like to be in love and the next thing you know they’re singing Afternoon Delight. He’s also very attached to his dog and talks to him but gets frustrated with him when he speaks Spanish. Every scene is like this.

The story quickly focuses upon the sexism of the news team. When it’s announced that Corningstone is joining the station the team goes to their manager to complain. Champ says the title of the job is “anchorman” not “anchorlady” and says that’s a scientific fact. Brick chimes in by yelling he doesn’t know what they’re talking about, then says, “Loud noises” and that when women have their period it attracts bears. After that each one of the team agrees they will compete to see who will be able to date Corningstone. They make all kinds of crude passes at her including Fantana putting on a cologne called Sex Panther that makes the whole newsroom run away it smells so bad. Even though its comedy this is actually some real social commentary as women were rejected as equals in the workplace in the 1970s. The dilemma of course is whether the news team can accept Corningstone as an equal or not.

WadeTop Contributor: Photography
2.0 out of 5 stars I'd forgotten how awkward this was
Reviewed in the United States on October 10, 2020
Verified Purchase
I remembered seeing it when it first came out, but evidently forgot that I also didn't find it very funny back then either. Watching it again now, with its attempts at "ironic" chauvinism that smell suspiciously un-ironic, and honestly just given that so much of its humour is absurdly juvenile and just not all that funny, I was left feeling… well, just kinda sad for it.

I do like much of Will Ferrell's work, but this is a low point in his career.

(still, it gets two stars, because I prefer to reserve one-star reviews for the *truly* worst trash, like Pacific Rim)
Read more
2 people found this helpful
Helpful
Report abuse

Nate
5.0 out of 5 stars Special Edition with book and cards for $5.99?!
Reviewed in the United States on March 11, 2019
Verified Purchase
The movie is great and it's nice to have "Wake Up Ron Burgundy" more widely available than it once was though this review was mostly to point out that I got the Unrated Mahogany Special Edition for $5.99. The price seemed too good to be true and many of the reviews even recent ones seemed to indicate that it was. I figured just the 2 discs for that price would be fine anyway but I did indeed get the Unrated Mahogany Edition complete with the book and trading cards so it would appear that problem has been fixed.
Read more
4 people found this helpful
Helpful
Report abuse

CLS
1.0 out of 5 stars Terrible audio doesn’t sync with movie!
Reviewed in the United States on September 6, 2020
Verified Purchase
Very disappointed! We have ordered some of our favorite movies in Blu-ray. We just had a chance to watch this and the audio is not in sync with the video😡. It is to late to exchange. I think I will find a different place to order movies. I have received at least 5 different movies with various problems. From Movies made for use only in the UK, to it beginning with a completely different movie then switching to the actual movie I ordered. Maybe amazon needs to check the sellers they use more thoroughly.
Read more
Helpful
Report abuse

RoxyM
1.0 out of 5 stars Insulting to my intelligence
Reviewed in the United States on March 29, 2020
Verified Purchase
Sorry, I got so bored, this movie was so dumb. Couldn't get into it. Waste of money! I turned it off. Barely got 25 minutes into it.
Read more
4 people found this helpful
Helpful
Report abuse
See all reviews

SAK
1.0 out of 5 stars Just not funny
Reviewed in the United Kingdom on January 10, 2021
Verified Purchase
Purchased this because it was in the the top 100 films of the century list. We watched it for about 15 minutes and then gave up. It will be going to the charity shop
Read more
Report abuse

Thomas Moore
1.0 out of 5 stars I tried but it failed
Reviewed in the United Kingdom on August 24, 2020
Verified Purchase
I do not understand why this and similar types of "comedy" are funny. This was hard to watch, I think I chuckled maybe once and prayed for it to end. Not my cuppa thanks
Read more
Report abuse

Oli
5.0 out of 5 stars Anchorman, Not Anchor Lady
Reviewed in the United Kingdom on January 7, 2014
Verified Purchase
Top part is a quote, I'm not actually being sexist!

Anchorman is really a film where you have to expect some of the silly laughs and quite ludicrous and outlandish behaviour. This has been one of my favourite films for many years, and is that in no way depressing (another variation of a quote)

Good to watch if you're in a group, or just want to have a laugh at some of the most quoted film lines ever!
Read more
One person found this helpful
Report abuse

WatfordDave
5.0 out of 5 stars two comic gems at supercheap price
Reviewed in the United Kingdom on October 21, 2013
Verified Purchase
Maybe you've already seen both films too many times.
If not (maybe you're under 20), the first is a comic masterpiece, up there with "Airplane" and "Police Squad".
The second is better than you'd think with at least 4 big laughs.
If you haven't seen them then you are very lucky because you can buy this and laugh and laugh and laugh.
Read more
3 people found this helpful
Report abuse

richieloco
4.0 out of 5 stars Soooo funny
Reviewed in the United Kingdom on November 29, 2020
Verified Purchase
Loved this. It is so funny. Well worth a watch
Read more
Report abuse
See all reviews