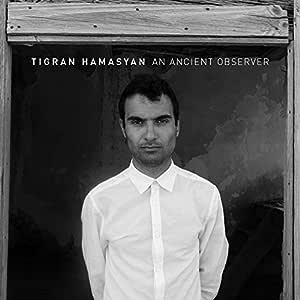 Nonesuch Records releases its second album from pianist Tigran Hamasyan, An Ancient Observer, on March 31, 2017. An Ancient Observer is the follow-up to Hamasyan's label debut, Mockroot, of which the Guardian said, "A phenomenal piano player, an irrepressible entertainer, a promising experimenter with hi-tech gizmology and a creative world-music composer. Mockroot plays vivaciously to all those strengths." The musician says of his new solo recording, which features ten new compositions: "These songs are musical observations about the world we live in now, and the weight of history we carry with us." Hamasyan will tour the US in February and March, then Europe in the spring; see below for the currently announced dates.

An Ancient Observer's songs—two of which are based on Armenian melodies—were written over the last four years. Some of the pieces are through-composed and completely written out, while others are composed with ample space for Hamasyan to improvise. Many include vocals layered into the mix. As with most of his compositions, Hamasyan cites a wide range of influences, from Baroque dance to hip-hop, with pedals connected to a synthesizer on a few tracks—while the sounds of his native country also are present, as always.

Hamasyan has returned to Armenia, where his daily life inspired these new pieces: "I gaze out of my window and see the biblical mountain Ararat with perpetual snow on its peak, with electrical towers with wires in the foreground cutting the picture, and satellite dishes melted onto old and modern houses—ancestral smoke coming out of their chimneys—and birds hovering above the trees along with occasional airplane trails in the vast sky. It is a dialogue, this interaction of God-given ancient nature with our modern human achievements," he says. "For me it is an awakening, and a beautiful feeling, to be able to observe the magnificence of this sleeping volcanic giant, which has existed for millions of years and was observed by the Ararat Valley Koura-Arax culture through to the present day citizens of the Armenian republic. I can see and observe the same birds, animals, rivers, and mountains that the craftsman of 4,000 years ago painted on a clay vessel. He was observing the same thing I observe now, and what remains is his or her beautiful work of art."

4.4 out of 5 stars
4.4 out of 5
27 customer ratings
How does Amazon calculate star ratings?
Amazon calculates a product’s star ratings based on a machine learned model instead of a raw data average. The model takes into account factors including the age of a rating, whether the ratings are from verified purchasers, and factors that establish reviewer trustworthiness.
Top reviews

Brian Whistler
VINE VOICE
5.0 out of 5 stars A profound observation from an ancient soul
Reviewed in the United States on April 12, 2017
Verified Purchase
On this new album, Tigran has gone deep into his Armenian roots, pulling epic compositions from ancient folk melodies and inventing some of his own. Letting this music wash over you, it’s often difficult to tell which one is which.

Like his earlier A Fable, this too is a solo album; the vocals, synths, Fender Rhodes as well as various percussion overdubs all belong to Tigran. But this is first and foremost a solo piano album. And what an extraordinary solo piano album it is! Tigran is a very disciplined composer. He introduces the listener to a theme, develops it, turns it upside down, throws in some sideways Bartok-like harmonies, before going his own improvisatory way. Tigran's pianism ranges from simply stated, austere melodies to dazzling bravura passages, all executed with passion and flawless technique.

Hamyasan also happens to be one of the more rhythmically precise pianists out there, having seemingly absorbed not only the complex odd time signatures of his homeland, but also the East Indian Konocal tradition as well. As such he brings more rhythmic savvy to the table than most piano improvisers can ever hope to summon. It’s his original voice, melodic sensibility and genius for rhythmic complexity that separates him from so many sound-alike prodigies on today’s scene. In a way, I think of him as a sort of Armenian Chick Corea--full of ideas, bursting with creative fire, and steeped in the jazz tradition while simultaneously delving deep into his ethnic roots. It is there that he discovers huge veins of gold, rare ore that has never been mined before - this is the secret to Tigran’s uniquely fresh approach. He also happens to be a fierce improviser: just listen to the middle section of Nairian Odyssey, an 11-minute epic piece that alternates between almost Debussy-like passages and wildly jagged improvised sections. It's a masterpiece and, for me, the centerpiece of the album.

Many of these compositions sound through-composed while a few sound totally improvised. Some of these are very short. Just listen to the tightly drawn Etude No. 1: Playful and minimalistic, it’s a little gem that tells its story in a mere 2:08 minutes. It’s followed by another moody miniature, the Egyptian Poet: Using just voice and prepared piano, it evokes windswept dunes and a wise old sage hidden in the middle of the vast Sahara desert. Pure magic.

This music is very different from his past couple of albums. Whereas Shadow Theater is a large, highly produced, high energy prog-rock/ fusion extravaganza that utilizes many musicians and voices, and the followup, Mockroot is a similar but somewhat less dense project, An Ancient Observer is for the most part a gentler, more inward affair, although not without its incendiary moments.

My only criticism is that that Tigran’s falsetto voice is not a strong one, and there are times I wished he had broken with his solo vision and used a female voice instead of his own on a couple tracks, such as the haunting Lenninagone and the beautiful title track, which happens to be the album closer. It’s a small quibble, because there is something surprisingly disarming and charming in that little falsetto, something so personal and affecting that in the end, perhaps only Tigran himself could’ve brought it to the table.

An Ancient Observer is a richly rewarding album, filled with extreme dynamic contrasts that go from contemplative to dramatic to pure joyousness and wonder. This is a wonderful, original, and essential album for all fans of Tigran, and not a bad place to start for those only just becoming familiar with this amazing artist. I would also highly recommend the aforementioned Shadow Theater, Mockroot, and Red Hail. But really, all his stuff is worth picking up. Warning: Tigran is highly addictive.

N. Frost
5.0 out of 5 stars A Fascinating journey
Reviewed in the United States on September 30, 2019
Verified Purchase
I heard a track from this album on the radio and I had to buy it. I am not disappointed. I have listened to it several times and each has been a different experience. It's not for the meek, but it is a rewarding trip.
Read more
Helpful
Comment Report abuse

Budster
5.0 out of 5 stars Rhythmic magic and the Soul of a people
Reviewed in the United States on June 27, 2017
Verified Purchase
Wow, just flat out wow.
Read more
Helpful
Comment Report abuse

Jonathan Rogers
5.0 out of 5 stars Tigran's best yet
Reviewed in the United Kingdom on June 27, 2017
Verified Purchase
This is an intimate and beautifully crafted album that, more so than previous albums, has an immediacy that feels like he's almost playing in your living room. Every track is wonderful.
Read more
3 people found this helpful
Helpful
Sending feedback...
Thank you for your feedback.
Sorry, we failed to record your vote. Please try again
Report abuse

Yuri Billones
3.0 out of 5 stars CD skips. A bit of a shame because the music is nice.
Reviewed in Canada on April 27, 2019
Verified Purchase
How do review this? Consider this then more as a feedback. The music/artist is excellent. The CD itself skips. That's not a good sign.
Read more
Helpful
Sending feedback...
Thank you for your feedback.
Sorry, we failed to record your vote. Please try again
Report abuse

Page 1 of 1 Start overPage 1 of 1
This shopping feature will continue to load items when the Enter key is pressed. In order to navigate out of this carousel please use your heading shortcut key to navigate to the next or previous heading.
Back
Next
Pages with related products. See and discover other items: Explore ideas for centerpieces