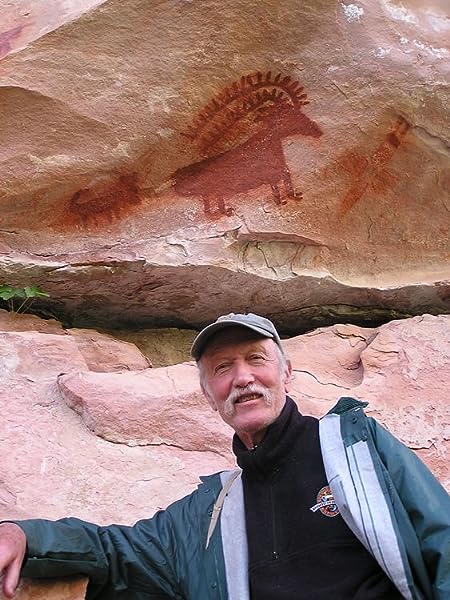 Ancient Ruins of the Southwest: An Archaeological Guide (Arizona and the Southwest) Paperback – January 1, 2000

by David Grant Noble (Author)
4.7 out of 5 stars 64 ratings
See all formats and editions
Sorry, there was a problem loading this page. Try again.
This third edition of David Grant Noble's indispensable guide to archaeological ruins of the American Southwest includes updated text and thirteen newly opened archaeological sites. From Alibates Flint Quarries National Monument in Texas to the Zuni-Acoma Trail in New Mexico, reader will be provided with old-time favorites and new treasures. In addition to descriptions of each site, Noble provides time-saving tips for the traveler, citing major highways, nearby towns and the facilities they offer, campgrounds, and other helpful information. Filled with photos of ruins, petroglyphs, and artifacts, as well as maps, this is a guide every traveler needs when they are exploring the Southwest.
Read more
Previous page
Next page

David Grant Noble is a writer, editor, and photographer living in Santa Fe, NM, USA. He was on the staff of the School for Advanced Research for many years and is associated with the Archaeological Conservancy. A quick link to his SAR Press books is http://itpots.sarweb.org

He has long studied the Southwest's deep history and archaeology and traveled widely to photograph ruins, rock art and landscape His books bring fresh archaeological and historical information to general readers. The first, "Ancient Ruins of the Southwest: an Archaeological Guide," has been in print in three editions for more than 30 years. Other titles include "In Search of Chaco: New Approaches to an Archaeological Enigma," "In the Places of the Spirits," and most recently, "Saigon to Pleiku: A Counterintelligence Agent in Vietnam's Central Highlands, 1962-1963." All his books and many photographs can be seen at www.davidgrantnoble.com. Noble’s photographs have been exhibited in galleries in New York, Santa Fe, San Francisco, and Dallas and collected by the Museum of New Mexico, Yale University's Beinecke Library, and the New York Public Library.

In 2003, Noble received the Victor Stoner Award from the Arizona Archaeological and Historical Society in recognition of his "outstanding efforts to bring historical and archaeological awareness of the Southwest to the general public." In 2011, the Western National Parks Association presented him with the Emil Haury Award for "outstanding contributions in scientific research or other activities that advance the understanding and interpretation of the natural and cultural resources of western national parks."

Robert S. Wright
5.0 out of 5 stars An invaluable resource for visiting the southwest
Reviewed in the United States 🇺🇸 on January 31, 2004
Verified Purchase
I have been to the Southwest four straight years now and I still refer to this book when planning my vacations. The book describes every major ancient site in the southwest with plenty of pictures and maps to give you the confidence you need to visit them. What I liked most about Mr. Noble's style of writing is he mixes in historical information alongside detailed descriptions on how to get to and visit the sites. The result is a history book that reads like a guide book. I'm the first person to admit that I have a short attention span when it comes to reading 100+ page books on places I want to visit. I tend to scan the text for what I'm interested in and miss alot of background information. By arranging the book in regions and giving each site its own 2-4 page section, it is easy to get a quick overview for planning and catch some interesting facts as well. As a result of this book, I have visited numerous sites in Utah, Arizona, Colorado and New Mexico. I can vouch for the accuracy of the descriptions and directions contained within the book and would highly recommend purchasing it if you are even remotely interested in the ancient sites of the southwest.
Read more
64 people found this helpful
Helpful
Report abuse

Patrick Barbour
5.0 out of 5 stars Interesting stuff!
Reviewed in the United States 🇺🇸 on March 29, 2021
Verified Purchase
Wow, a lot of really interesting information about all those native American ruins that I was just driving by on the highway before in the Southwest!
Read more
Helpful
Report abuse

Marge
5.0 out of 5 stars Inspiring Travel Companion
Reviewed in the United States 🇺🇸 on September 28, 2009
Verified Purchase
I stumbled upon this book in the library and found myself reading every page. I have visited most of the sites described with a friend who (unknown to me) had a copy and planned our itinerary. I wish I'd had the book with me so I could have better understood how what we were seeing fit together. The descriptions include the well known as well as less often visited ruins. I have become a student of ancient American life, and this book inspires me to revisit places I've seen. The author mixes easy-to-read descriptions, archaeology, and speculation about early peoples in a book that reads more like stories than the travel companion it is. The maps, explanations of what you'll see, and suggested additional reading inspire further exploration. I highly recommend the book to anyone interested in the Southwest who plans to visit ancient ruins or wants a concise reminder of what they saw after visiting. I'm getting my own copy to keep even though I've read it. A great book!
Read more
7 people found this helpful
Helpful
Report abuse

Critical Thinker
4.0 out of 5 stars Great Reference, but Photo Reproductions Need Improvement
Reviewed in the United States 🇺🇸 on April 27, 2015
Verified Purchase
This book serves as a great text and reference. My only complaint is with the photos, which are all printed in black and white. Whether due to an error in plate preparation, or by the press's page designer, they are mostly very mid-tone and lacking in contrast, muddying the detail. (This might also be the result of converting color shots to B & W.) How I wish more of the photos were in color, since the Southwestern deserts are alive with amazing hues which are lost here. The author managed to capture wonderful shots which deserve better treatment and reproduction.
Read more
3 people found this helpful
Helpful
Report abuse

Jack
5.0 out of 5 stars Excellent Guide to finding ruins all over New Mexico and Southwest
Reviewed in the United States 🇺🇸 on May 10, 2017
Verified Purchase
I used this as a primer to inform my journeys across New Mexico. The ruin list appears to be as complete as any I can find, and each writeup gives a great summary of what I go to see. I've used this to plan trips all across New Mexico.

Only suggestion: Mapping or indexing by location would be very helpful. The sites are sorted by culture, so if you go to a particular Ancestral Pueblo/Chacoan site, you might not know that there are Pueblo or other ruins nearby.

Thank you for this book.

J. Barr
5.0 out of 5 stars Excellent
Reviewed in the United States 🇺🇸 on December 5, 2016
Verified Purchase
After visiting Hovenweep and Aztec NM, I decided to order this book. Wish I had read this book before visiting those two outstanding parks. Its full of information on the ruins and the cultures who occupied the pueblo places of the past. The book has inspired me to return to the southwest next year and explore more of these ancient ruin locations.
Read more
One person found this helpful
Helpful
Report abuse

Joachim
4.0 out of 5 stars useful
Reviewed in the United States 🇺🇸 on May 27, 2017
Verified Purchase
Useful, but perhaps not quite directive enough for someone looking for guidance on what to see and what you can miss when time is limited.
Read more
Helpful
Report abuse

Gwenda
5.0 out of 5 stars Great guide!
Reviewed in the United States 🇺🇸 on September 9, 2013
Verified Purchase
This book is the ONE TO HAVE when touring archeological sites, monuments, and national parks in the Southwest. It is well written with details about ancient peoples, discovery of site, analysis details, cultural expansion and influence, location, hours, and available services with telephone numbers. Too many sites for one trip, but now I can plan an area visit that will fulfill great photography efforts and a better understanding of the Southwestern cultures.
Read more
2 people found this helpful
Helpful
Report abuse
See all reviews