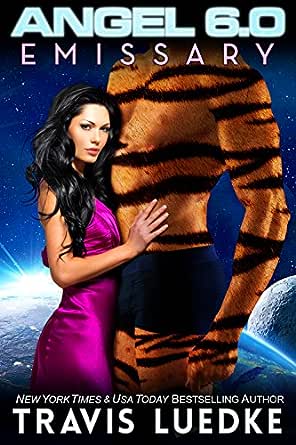 You've subscribed to Angel 6.0! We will preorder your items within 24 hours of when they become available. When new books are released, we'll charge your default payment method for the lowest price available during the pre-order period.
Update your device or payment method, cancel individual pre-orders or your subscription at
Your Memberships & Subscriptions
There was an error. We were unable to process your subscription due to an error. Please refresh and try again. 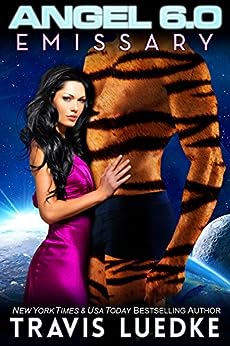 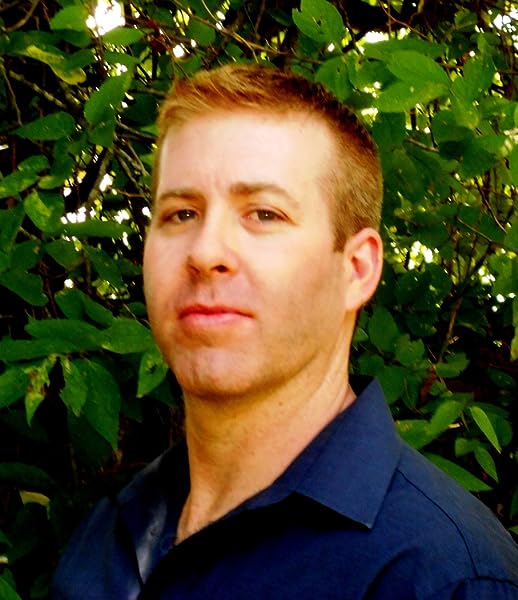 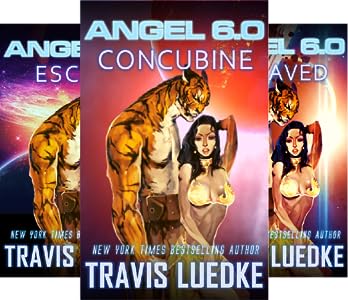 If you'd like to be notified of new releases, special sales,and get FREE ebooks, join the Readers Group: smarturl.it/ReadersGroup

A few notes on Angel:

The story of Angel 6.0 starts with a simple girl living a sheltered life on Nugene station. Genetically engineered to reach the fullest potential of the human race, Angel must learn to adapt quickly when she's abducted by ruthless slave traders. Enslaved as concubine to an alien warlord, Angel is thrust into the mess of interplanetary politics and used as a pawn in the power struggle between space pirates, the Earth Defense Council, and greedy alien traders.

Enjoy this thrilling, sexy, steamy ride across the galaxy with the perfectly engineered Angel 6.0 in her struggle to survive and find love amidst corruption, war, and the perverse men and aliens who want Angel for their own reasons. Explore the darkest parts of human nature, the dangers of alien sex rituals, and learn the true potential for human greatness ... and downfall.

ANGEL 6.0 THE  SERIES:
Born of illegal experimentationon the human genome, I've been taken for a ride across the galaxy, enslaved tothe warlike race of Cats called The Gran. They think I'm some kind of upgrade,a new slave stock to be bred.

Though many would resent me for the decisions I have made, they neverexperienced my struggle to find love and meaning in a world where I do notbelong.

A freak of nature, the humans don't want me.
Far more valuable than they couldever know, the Cats don't appreciate me.
Lost in the conflict between twogalactic empires, the pirates can't save me.
Standing at the center of an interstellar war, the Earth Defense Council neversaw me coming.
I am Angel6.0 and this is the dark, wicked, violent tale of my life.

3.7 out of 5 stars
3.7 out of 5
20 global ratings
How are ratings calculated?
To calculate the overall star rating and percentage breakdown by star, we don’t use a simple average. Instead, our system considers things like how recent a review is and if the reviewer bought the item on Amazon. It also analyzes reviews to verify trustworthiness.
Top reviews

Dina Bushrod
5.0 out of 5 stars Wham Bang Thank You Mam !!!!! What an ending, DO NOT PASS THIS UP
Reviewed in the United States on September 2, 2015
Verified Purchase
OMG author Travis Luedke's final book in his Angel 6.0 series, Emissary, it's filled with surprise after surprise. It's jam packed with the same violent action and sex you can expect from a Luedke's novel, butttt he does it, in my opinion, differently. I was surprised at how it started but believe me that changed quickly; he had to build more background for what was to come. Then Wham, Bang towards the end I was yelling at him (Luedke that is)how could he do that to us NO,NO,NO. That's what happens when you jump to conclusions. I'm going to miss Angel, and her band of conventional and unconventional lovers, her strength, her mad skills, even her love of pain. As a fan I can only hope that one day she'll surprise us and show up, you know like a cameo in a movie. I don't like doing spoilers so I can only hope I didn't over do it, because I've said a lot more than I usually do. Author Luedke has some mad, crazy skills in his story telling and I would recommend this and all the Angel 6.0 books to those that love SciFi with a delicious touch of the erotica and the blood and guts of a really good thriller. By Angel, I'll see you in my re-reads.
Read more
Helpful
Comment Report abuse

Keenreader
4.0 out of 5 stars Brilliant end to a series.
Reviewed in the United States on August 26, 2015
OMG! What an ending to this series. This had me speed reading through to get to the end it was so good. Totally fitting ending after all that Angel has gone through, this ending made me smile.

When the DC attack the Gran, it's war, and the force of the Gran comes into play as they wipe the humans who attack wiping out clones and colonies. Angel realises there is more at stake and when the Emperor decides to take his fleet to Earthside to try to get to the bottom of the attack, angel is sent as his mouthpiece to the UN council and the DC chairman for peace talks. There she finally understands where she stands and what she stands for. She realises to the council she is to be feared and moments of her past with old lover Jason may come to haunt her and so they do eventually. When her men come for her, she's once again used.

I have to give the author props here as he relays the fight scenes so well it's like being there. The writing flows well and is fast paced throughout, ensuring there was no stalling which gives the feeling of urgency to the overall story. The love between her lovers is not neglected as there is time in between for Angel and Cesar to express themselves, as well as Angel getting into her love with her Prince and Cilla.

I loved this and was happy to see that It ends as it starts with our Angel dancing in Zero G.

I received a copy of this book for an honest review.

Ariel
5.0 out of 5 stars I. LOVE. ANGEL.
Reviewed in the United States on August 25, 2015
*A complimentary copy of this ebook was given by the author in exchange for my honest review.*

So there's this quote that comes to mind:
Sometimes life brings you full circle to a place you have been before just to show you how much you've grown"
And this quote is on point when it comes to Angel 6.0: Emissary.
This being the last book for our dear Angel & crew, I had a bittersweet vibe. While I'll miss Angel and her pain is pleasure ways, I'm also very happy for her, too!! Of course Angel had the the loves of her life beside her, but as war is descending upon her, she will have to figure a way to keeping them alive as well as herself. It's a lot to take on and in order for her to do it, she'll have to figure out why and who she is. Although, I'm inclined to believe that she always knew it, just never believed it until now. I had my downs and I definitely had my ups with Emissary. Thinking back to the very beginning and where the story has ended, it's been dangerous, sexy, violent, emotional, crazy, and I got to watch a cast of characters grow and I guess that's why it's bittersweet. I will miss reading about them. I accidentally got attached. Whoops!! This Space Opera wrapped up, not as epic and blown out of the water, like I'd thought it would be, (you know Science Fiction & all). The author had a more subtle approach, a believable one, to the end and it indeed came full circle. If you like your Sci-Fi naughty and gory then this series is one hell of a wild a** adventure you won't want to miss out on.

J Armstrong
2.0 out of 5 stars No reverse harem
Reviewed in the United States on December 28, 2019
So this series is now done and the reverse harem never manifested. Angel went from guy to car to guy to buy to cat, finally to be shared by a cat and guy, but not at the same time and the y do not hold the same status to her.
Read more
One person found this helpful
Helpful
Comment Report abuse

Indiquinn
5.0 out of 5 stars Dark, riveting, sexy, fantastic end to Angel 6.0's tale.
Reviewed in the United States on August 25, 2015
This book has been provided by the author with no expectations and that in no way influences my review. Dark, riveting, sexy, fantastic end to Angel 6.0's tale. In this book, Angel's genetics are finally revealed in black and white. No hints, no foreshadowing, just out and out rage for all to behold. Her love life is sexy, violent, dark and satisfying to the Nth degree. She is trusted, she is loved and she will do anything, ANYTHING to make sure she can keep her happiness. Hold onto your book people, you are in for a ride. Enjoy the rollercoaster and see what lengths Angel will go to. I would definitely recommend this series to anyone looking for a different kind of space opera, keeping in mind that that the dark twisted sex scenes add to the story and do not take away. Not for the faint at heart. I dare you to step out of your safe zone and read this book! Enjoy!
Read more
One person found this helpful
Helpful
Comment Report abuse

Angel becomes the Emissary for the Gran to negotiate peace with Earth. She goes through hell dealing with the council who tries to end her. Angel realizes that she must come up with a unique plan to prevent war.

Angel has her two lovers who will go to any length for her. They love her unconditionally and give her just what she needs/craves in her sex life but also fill a void in her emotional well being.

Travis writes a hot sexy, adventure filled series that is like no other. If you dare to explore...read these outstanding books.

Can't wait for what comes next from this great author.

Gazelle101
1.0 out of 5 stars No thanks!
Reviewed in the United States on March 14, 2019
Found the heroine through out the series to be too quick to go from relationship to relationship with no breath in between. I hung on hoping that things would improve, but was continually disappointed in the character of the characters. Will not read this author again. His view of the "universe" does not work for me.
Read more
Helpful
Comment Report abuse
See all reviews