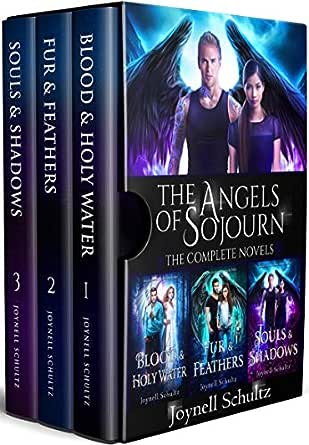 You've subscribed to Angels of Sojourn! We will preorder your items within 24 hours of when they become available. When new books are released, we'll charge your default payment method for the lowest price available during the pre-order period.
Update your device or payment method, cancel individual pre-orders or your subscription at
Your Memberships & Subscriptions
There was an error. We were unable to process your subscription due to an error. Please refresh and try again. 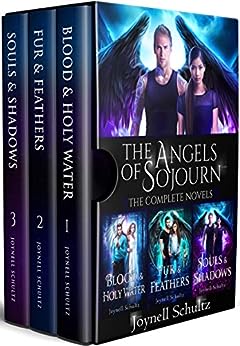 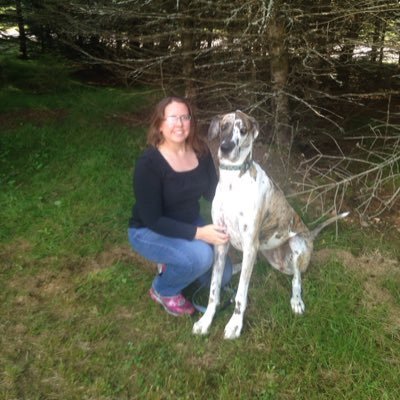 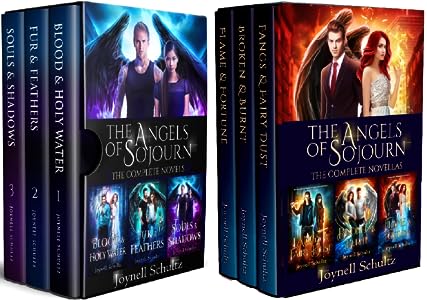 Emily Pennington
TOP 500 REVIEWER
5.0 out of 5 stars Wonderful Box Set !!
Reviewed in the United States on October 21, 2019
Verified Purchase
We are immersed in a world where angels walk among us, besieged with the same sins we struggle with…and the same desires. Deep down, everyone just wants to be loved and accepted. This box set includes: Blood & Holy Water (Book 1), Fur & Feathers (Book 2), and Souls & Shadows (Book 3). I enjoyed each one of them! Below is a review to give you an idea of what you’ll find – and you’ll love these stories!

*** Reviewing “BLOOD & HOLY WATER - BOOK ONE ***
Dr. Fin O’Brian hadn’t fed in days. He walked down the emergency room corridor with a syringe of blood, but he had to lose his invisible stalker, an angel who had been following him for a month. He entered the physician’s lounge and had to wait until another doctor left. But then he felt the angel’s presence again and thought it had come for his soul. He demanded a face-to-face conversation and, to his surprise, a young female without wings appeared! She was stunned he could both sense her and see her! Ava has been trying to earn her wings for over 100 years and somehow believes Fin has some part to play with the miracle she needs to accomplish this. Wings would mean she could visit Earth at her discretion and work directly with humans. Fin, however, wants her to leave him alone so he can do his job and help his patients coming through the ER. He was so different from what Ava knew of other vampires. He didn’t drink from humans, could be in the sun, could interact with angels, and cared for humans. So peculiar.

To prove herself to Fin, whose skill, kindness, and empathy had greatly impressed her, Ava sought out his dying patient. Ava could do something about her intense pain despite morphine, but she’d need to step out of Sojourn and into the human world to become physical. Then she took Gwen’s pain into herself.

As Fin was ready to leave, a female vampire came into the hospital! He raced out another door, wondering why she was there and wondering if it had anything to do with the angel. When he saw Ava again, she denied knowing about the vampire and helped him search for her with no luck.

When Ava went to ask Simon, her advisor who assigns her miracles, some questions about Fin, she overheard him say to someone that two potential angels were found dead before they could cross over. At the same time Fin, looking again at a letter he received, is being called by the Chair of the Blood Board to help with a vampire issue -- vampires are turning up dead instead of disintegrating into ash. Fin, who always avoided his own kind, cannot ignore the summons. Ava has a feeling that the dead angels have something to do with Fin based on the tingling she feels. She won’t walk away from him, still sure he is her miracle, even though he tries to get her away from danger. Can they figure out how to work together to solve the two mysteries? And what will happen to them then?

I really loved this book. The story line never lags at all, moving at a perfect pace and pulling the reader in. Both main characters are so different from the stereotypes and can’t figure each other out. But can they work together to solve this serious situation that affects both angels and vampires? Grab this box set and enjoy some wonderful stories!
Read more
One person found this helpful
Helpful
Comment Report abuse

KaraT
5.0 out of 5 stars Really enjoyed it.
Reviewed in the United States on December 4, 2019
Verified Purchase
Thoroughly enjoyed this box set. It was interesting, and kept me immursed in the story. It was hard to put down.
Read more
Helpful
Comment Report abuse

Mary
5.0 out of 5 stars "The Angels of Sojourn Boxed Set" Can't Be Beat, As You'll Read These Epic Tales MANY Times!
Reviewed in the United States on October 23, 2019
Reviewed By: LMR
You'll Want to Remember the Name Joynell Schultz, as Her Work Shouldn't Be Missed!
WoW! If you haven't Read anything from this Amazingly Talented Author, then you Really NEED to give Joynell a Chance. I Grow More & MORE impressed with Her Work, as I Read each Consecutive Book, & TRUST Me when I say that, THAT Doesn't happen often!
"Blood & Holy Water:"
"Blood & Holy Water" Is A Great Read, With An Awesome Balance Between Drama & Sweet, S€X¥ Tension!!
She's an ANGEL on a Mission...
She's Seek'n a Miracle to MOVE Up the Proverbial Ladder,
Unfortunately... For Hundreds of YEARS,
She's gotten NoWhere at ALL!!!
You Might say She's a Bit of a Failure...
Especially, Considering the Number of Attempts She's made at Her Wings,
That ENDed Up with a Swing & a Miss...
Her Latest Attempt....
Has led Her to a Hot Doctor,
But... There's Something Different About HIM,
As it seems He's a Vampire!
Only He's Nothing like He Should be,
Which leads to lots of Questions...
Like... What would His Lips Taste like?!? Ohhh My!
It's a Race to Save their Respective Kinds...
From an Unknown threat,
Which throws them Together & Deepens a Newfound Bond!
But....Will it be Enough to Save Them in the End!?!
Find Out In Joynell Schultz's Spectacular opening Book of the "Angels of Sojourn" Series!

"Fur & Feathers:"
It's All About The "Fur & Feathers" In This Epic Tale... He's Got The Wings, & They've Got Tails!!
He's an ANGEL who's Fallen!
Sooo, He's basically outta a Job,
Unless He can find a Way to Earn BACK His Wings,
By completing a Miracle...
At least, that's the plan... Until HE meets Her & Her Son!
What He didn't Expect... Was to FALL a Second Time,
This Time it's NOT From Sojourn, IT's His HEART that's Fall'n...
And He Fears, He'll NEVER find His Way BACK!
Find Out what Happens in "Fur & Feathers" Today by One-Clicking!

"Souls & Shadows:"
It's All About "Souls & Shadows" In This Epic Tale... He's Gett'n Souls, & She's Chas'n Shadows!!
He's an ANGEL who's Never Lived or LOVED... Before!
He's basically, He's just Chas'n Down Souls for a Job,
Escort'n them to the AfterWorld... Some GO Up, Some GO Down,
But... Always Escorted by an Angel of Death!
Until HE meets Her, & He's intrigued by what He sees...
That's the beginning of His Distraction,
Which is How He Screws Up, & allows A Soul to GO FREE!
She's Feel'n a Compulsion... Tugg'n Her Here & There,
The ONLY problem is... EveryWhere She's being tug, Tug, TUGged,
There's a DEATH Occurr'n!
Which brings Her IN contact with the Angel of Death,
And the Chase through Shadows is ON!
Although, what Neither Expects... Is to FALL along the Way!
Find out what Happens in "Souls & Shadows,"
By One-Clicking Today!

I rarely give Coveted 5 STAR ratings; they're saved for Books/Items that Outshine, Outclass, & Outperform their competition... They've gotta give me something MORE! Joynell Schultz has won that Distinction for "The Angels of Sojourn Boxed Set!" Kudos Ms. Schultz for your Stellar work!!
I was granted, via B00|{$P®0UT, an ARC of Joynell Schultz's "The Angels of Sojourn Boxed Set: A Romantic Urban Fantasy Series, Books 1-3." I recommend this book to others based upon its own merits. All opinions expressed within this review are uniquely my own & freely given!
Until next time... Happy Reading!
Read more
One person found this helpful
Helpful
Comment Report abuse
See all reviews from the United States

lcr
5.0 out of 5 stars Fabulous paranormal, urban fantasy
Reviewed in the United Kingdom on February 14, 2020
Verified Purchase
The Angels of Sojourn box set is a treat for all supernatural and urban fantasy fans. These three full length books not only feature angels but also demons, vampires, fae, werewolves and hybrids. Joynell Schultz creates wonderful characters and entertaining storylines that combine plenty of gritty action and rather sweet romance. It is great to have these books available in one set as you will want more once you start reading. I loved these books and highly recommend them.
Read more
Helpful
Sending feedback...
Thank you for your feedback.
Sorry, we failed to record your vote. Please try again
Report abuse

Corinne
5.0 out of 5 stars Angels, Vampires, Werewolves what more could you want.
Reviewed in the United Kingdom on February 13, 2020
Verified Purchase
Absolutely loved this box set of books. Very well written with characters that I definitely cared about. Love that the books led into each other as different characters swapped between main and secondary. Fabulous writer who engages contact with her readers.
Read more
Helpful
Sending feedback...
Thank you for your feedback.
Sorry, we failed to record your vote. Please try again
Report abuse

Rona
5.0 out of 5 stars Fantasy at it best!!!!!!!!
Reviewed in the United Kingdom on March 21, 2020
Verified Purchase
Absolutely great books throughly enjoyed reading them.
Read more
Helpful
Sending feedback...
Thank you for your feedback.
Sorry, we failed to record your vote. Please try again
Report abuse