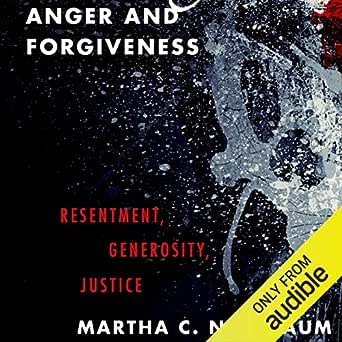 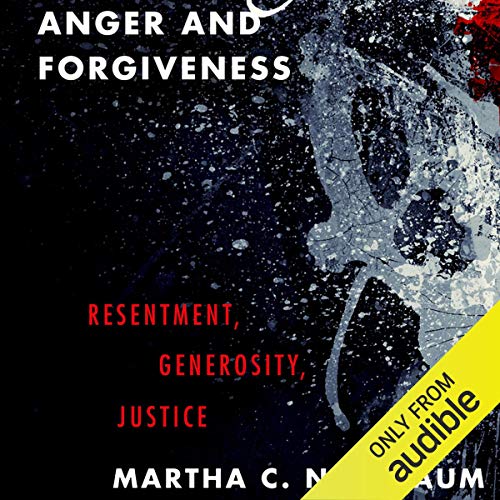 4.2 out of 5 stars
4.2 out of 5
61 global ratings
How are ratings calculated?
To calculate the overall star rating and percentage breakdown by star, we don’t use a simple average. Instead, our system considers things like how recent a review is and if the reviewer bought the item on Amazon. It also analyzes reviews to verify trustworthiness.
Top reviews

David C
5.0 out of 5 stars Poetic, just, wise
Reviewed in the United States on June 14, 2016
Verified Purchase
Nussbaum is a scholar I have admired for many years, from my first reading of Fragility of Goodness (1986), to Poetic Justice (1996) and Political Emotions (2013). In Anger and Forgiveness (2016), she adds to her ongoing scholarship on justice with the same clear, level-headed, literary approach that first captured my attention. Dedicating the current work to her teacher, Bernard Williams, suggests a certain humility and confidence that make reading her words feel like a gift lovingly given.

Anger, she argues, includes not just awareness of a serious wrong but also a desire that the wrongdoer suffer. This can happen two ways, either by payback or by lowering the wrongdoer's status. Both payback and down-ranking are problematic because they focus backward. Nussbaum argues for the forward-looking emotion she calls Transition, which is future-directed toward action that is less concerned with payback or down-ranking and instead inspires or motivates one to pursue a greater good.

Forgiveness is the subtheme, often distorted into a transaction that does not pursue a greater good but instead reinforces the imbalance that makes anger so problematic to begin with. the Christian tradition is rife with theological perspectives rooted in a transactional understanding of anger and forgiveness, justified by appeals to the anger of God or proverbial admonitions to be slow to anger, not rash. Penance and contrition have their place. But the forward-facing, unconditional forgiveness that waives anger is better. Better still is unconditional love and generosity. Nussbaum examines transactional forgiveness in personal, social, and political realms and concludes that the transactional path is not the one that leads in the end toward generosity, justice, and truth.

Nussbaum's caution about anger's efficacy to bring about justice stands in contrast against much that is written about anger in the therapeutic realm. Family systems analysts examine the triangular functioning of anger in maintaining unjust equilibrium in interpersonal relationships. Anger may serve a helpful function in differentiating the non-anxious presence who then can break generational patterns of neglect or abuse. Narrative therapies find anger helpful in rewriting a patient's story and grant control/authorship of his or her life. While anger may be misdirected, explosive, suppressed, or otherwise harmful, if can as well get our attention like a fever does, indicating that something is wrong that needs to be made right. Anger, as pastoral counselor Andrew Lester points out [Anger: Discovering your Spiritual Ally (2007)], can help us detect and uncover our idols, hidden guilt and shame, and thus clear the path so we can imagine our future stories with hope. Nussbaum would agree at least that anger "may serve as a signal that something is amiss." As a wake-up call, even as a deterrent, it serves a function. but fails to motivate unless it moves beyond the transactional and motivates us toward the common good.

Her claim is in fact as radical as she says: "that in a sane and not excessively anxious and status focused person, angers idea of retribution or payback is a brief dream or cloud, soon dispelled by saner thoughts of personal and social welfare." Well-grounded anger puts itself out of business in its healthier form, becoming "compassionate hope." This is the Transition that moves beyond payback to pursue justice.

fletch
4.0 out of 5 stars Hard read but worth it
Reviewed in the United States on January 27, 2019
Verified Purchase
Tough read, very academic. But makes some fascinating points. Takes a while to get through.
Read more
2 people found this helpful
Helpful
Comment Report abuse

Cristina B.
5.0 out of 5 stars Good book
Reviewed in the United States on July 14, 2019
Verified Purchase
Felt a bit like Nussbaum was speaking about anger and forgiveness from her position of white privilege, but still a good reading.
Read more
Helpful
Comment Report abuse

James H. Parsons
5.0 out of 5 stars Pathway to Advancement
Reviewed in the United States on March 19, 2017
Verified Purchase
Dr. Nussbaum provides a concise analysis of anger based on classical drama, theology, and modern psychology. She proceeds with a powerful argument against any justification for the emotion with suggestions for cultivating a more forward looking and generous non- anger. The book is both a refresher on the traditional background and flaws surrounding retributive justice, and a call for individuals to work through the urge toward anger in pursuit of clear eyed reason. I recommend for anyone interested in exploring ways that humans might stop making the emotion laden mistakes again and again, without giving up the positive emotions of love and generosity of spirit.
Read more
6 people found this helpful
Helpful
Comment Report abuse

Fuzzmello
4.0 out of 5 stars Excellent review of anger dynamics from the most objective ethicist alive today.
Reviewed in the United States on July 9, 2017
Verified Purchase
Pretty much what you'd expect from Professor Nussbaum. I think it's a solid point of entry for examining the behaviors of the alt-right, many if not most Tea Party elected officials, and of course, Donald Trump/Steven Bannon/Beauregard Sessions.
Read more
3 people found this helpful
Helpful
Comment Report abuse

John Fletcher
4.0 out of 5 stars A mixed (but useful) bag
Reviewed in the United Kingdom on March 18, 2017
Verified Purchase
In an age when we are invited to be angry about things, and where vindictiveness and the desire for revenge and punishment are common on all parts of the political spectrum, a book about anger and forgiveness is very timely. Nussbaum's book makes a convincing argument that we should decide, as the Greeks and Romans did, that anger is both dangerous and a waste of time, and adopt strategies where we can which look forward to some kind of prevention, rather than backwards to resentment and the desire to punish. In addition, she argues, the more you look at forgiveness as an idea, the more it comes to resemble a form of aggression, because it's conditional on the alleged miscreant apologizing, abasing or humiliating themselves. This can be contrasted with genuine forgiveness, which is unconditional.
So far so good. And the book has other virtues: it's clearly written, scholarly in the best sense and logically constructed. It is based partly on first-hand knowledge of Greek and Latin texts, as well as familiarity with quite a lot of theology, philosophy, literature and even music.
The weaknesses are what one might expect. It's a book by an American academic, written for other academics and students, which takes a series of liberal social and political norms as given and effectively universal. The author is obviously aware of how limited and untypical much American experience is (she specifically recognises this in the case of prisons for example) but this doesn't influence her arguments. So there's an assumption that breaking the law is always equivalent to "wrongdoing", which is obviously not true in many societies. Come to that, it's not always true in liberal societies either: we can be angry about things that are perfectly legal, just as we can believe that certain laws are wrong.
The book is weakest on anger and personal relations, where the world assumed to be typical is one of universalized middle-class liberal norms which most people simply would not recognise in their own lives. The author describes a serious anger problem about men who offer to put her suitcase in a luggage bin in airplanes. Not everybody will sympathize with that sentiment, I fear, not least the many women over the years who have asked me to perform that service for them. I suspect though that such thinking has been deeply ingrained at an unconscious level, as has the need of the author (or perhaps the editor) to go to almost any lengths, no matter how ugly, to avoid using masculine pronouns, even when men are being discussed, unless they are villains of some kind. If you are at all sensitive to style and expression, this is infuriating (I almost said it made me angry but that would be an exaggeration).
So a mixed bag really. Several of the chapters are genuinely insightful and profound, the style is attractive and accessible, and the subject is important and topical. Overall, I'm glad I read it, even if I had the almost-irresistible urge to get out the red pencil from time to time.
Read more
10 people found this helpful
Report abuse

Noid
3.0 out of 5 stars Not as good as I hoped
Reviewed in the United Kingdom on August 31, 2020
Verified Purchase
Some very interesting and thought provoking ideas however it felt somewhat contradictory. A lot was covered here and it read like a mishmash of different ideas spanning from personal to political. Very densely written which felt unnecessary at times.
Read more
Report abuse

Lucy Williams
5.0 out of 5 stars excellent
Reviewed in the United Kingdom on July 5, 2019
Verified Purchase
a powerful thoughtful book, fascinating and created much room for reflection and aha moment s- both on personal and community and societal/gloal. The author manages to convey huge appoint soft details and knowledge with a light touch
Read more
Report abuse

Robin de Roux
5.0 out of 5 stars Five Stars
Reviewed in Canada on June 8, 2017
Verified Purchase
Very thought provoking exploration of anger and forgiveness and the negative and positive sides of the relationship between them.
Read more
One person found this helpful
Report abuse
See all reviews