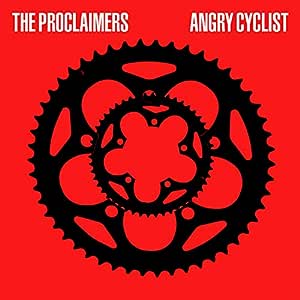 PROCLAIMERS (Artist) Format: Audio CD
4.8 out of 5 stars 124 ratings
See all 4 formats and editions Hide other formats and editions
Includes FREE MP3 version of this album.&nbspProvided by Amazon Digital Services LLC. Terms and Conditions. Does not apply to gift orders.&nbspComplete your purchase to save the MP3 version to your music library.

4.8 out of 5 stars
4.8 out of 5
124 global ratings
How are ratings calculated?
To calculate the overall star rating and percentage breakdown by star, we don’t use a simple average. Instead, our system considers things like how recent a review is and if the reviewer bought the item on Amazon. It also analyzes reviews to verify trustworthiness.
Top reviews

Evan Rogers
3.0 out of 5 stars Nice but blah
Reviewed in the United States on October 18, 2018
Verified Purchase
Upbeat sound with great harmonizing but lyrics sorta blah; I wouldn't consider any of these songs for a "best of" album. So, nice sound for background music.
Read more
One person found this helpful
Helpful
Comment Report abuse

Jason Stein
4.0 out of 5 stars I take a few steps back to gain perspective.
Reviewed in the United States on September 29, 2018
The Scottish twin duo of Charlie and Craig Reid were basically unknown, when, in 1993, a track from their 1988 sophomore album became a smash hit in America. In fact, it was an unlikely hit being that it was five years old at the time, and it was featured in a mediocre Johnny Depp film titled "Benny & Joon". Yet, against the odds, "I'm Gonna Be (500 Miles)" climbed to number 3 that year. Their lone hit in America.

In fact, by 1993 the brothers had only put out two albums, and it had been five years since 1988's "Sunshine on Leith". I guess with the success in America of "I'm Gonna Be (500 Miles)" they had renewed interest and in 1994 put out "Hit the Highway" which had no hits in America. They disappeared for seven years, and in 2001 came back with "Persevere". I guess this was their throwdown after 14 years and only three albums (a death sentence to any lesser artist/band). A statement that said we are here to stay. Ever since then, the brothers have consistently released a new album every two or three years without fail.

I have been a fan since 1993. I own all of their albums. I always look forward to a new release from them, but I often have to look at Amazon.uk in order to keep up on them as they are still not all that popular in America after all these years (no justice!) That being said, I also have to admit that their last three or four albums have just being okay, not great, not consistent, just okay (for them).

I have my favorites like "Angry Cyclist", "Then It Comes to Me", "The Hours Between", "A Way With Words", "Classy", and "The Battle of the Booze", but the rest of the songs aren't too shabby either.

All this is to say, that if you are a fan, you'll obviously want this. But, if you've checked out in recent years because you felt their albums weren't up to snuff, then it's time to revisit them with "Angry Cyclist".

Here's how "Angry Cyclist" compares to The Proclaimers' previous works:

gentleman2012
5.0 out of 5 stars Doesn't get better than this!
Reviewed in the United Kingdom on November 6, 2018
Verified Purchase
As a Weegie (look it up) I used to firmly believe that the only good thing to come out of Edinburgh (Embra) was the Glasgow train. Then, along came The Proclaimers with albums of sad, but incredibly uplifting songs. I've enjoyed their music for decades, especially their clever lyrics, wordplay and their unwillingness to shy away from some very Scottish problems like sectarianism.

Last week I got the chance to see The Proclaimers on stage for the first time, showcasing their latest album Angry Cyclist. I wasn't looking forward to hearing Sunshine on Leith, a song that always brings tears to my eyes, but oddly, it was Letter from America that started me off. The idea of the Highland Clearances, the forcing of tenant farmers off their land and the link to the near-death of Scottish industrial towns always pulls on the heart strings.

But, back to Angry Cyclist. I've heard almost all of Craig and Charlie's songs over the last 30 years and, in my humble opinion, this is the finest work that they have ever done. Every tune is lyrically sublime and written with their usual passion, often surprising in their intensity. Alexa must be sick of me asking her to play this album as I'm doing it many times a day.

If I had to choose one outstanding track, it's Streets of Edinburgh. I don't think I've ever heard sweeter harmonies between the brothers and the pathos of the song has the same effect on me as Sunshine on Leith - two beautifully written and delivered songs about a city, "blessed or cursed" that the boys clearly love.

John
5.0 out of 5 stars Not just a 'heritage act' - still angry!
Reviewed in the United Kingdom on September 30, 2018
Verified Purchase
It was back in 1987 as a student when I got my new copy of This is the Story signed by Craig and Charlie in Edinburgh HMV. Strangely I have not bought a Proclaimers album as a new release since then (although I have a couple of other albums which I have acquired more recently).

I was attracted by the positive reviews of Angry Cyclist which talked about their angry politics in the lyrics of some of the tracks, and found myself in possession of a great album.

The tracks are universally tuneful, inciteful and, often, fun, whilst still making their point.

Also, unlike so many albums these days, it is worth sticking with this to the end. The final three tracks are some of the best.

The Scottish dates of their supporting tour sold out immediately. With the loyalty of their fan base, they didn't need to make an album this good. But they did!
Read more
5 people found this helpful
Report abuse

SM
5.0 out of 5 stars The Proclaimers at their best once more.
Reviewed in the United Kingdom on August 12, 2018
Verified Purchase
On first listen I really liked this new offering from the Reid brothers. On second listen I love it. Packed with catchy melodies, poetic lyrics and plenty of humour this is their best work for a while. Hard to pick a favourite track...it's that good.
Read more
8 people found this helpful
Report abuse

Amazon Customer
5.0 out of 5 stars a well desrved five stars!!
Reviewed in the United Kingdom on August 25, 2018
Verified Purchase
i only got "angry cyclist" a couple of days ago and listened to it and i absolutely love it already!it gives your soul such a boost to be able to still find such fine music with integrity out there.: but then you always can rely on the proclaimers they never disappoint.theyre on top form as usual with this album and theres not one insipid dud on it.im so glad that ive got "angry cyclist to add to my now complete proclaimers collection.It makes me happy! ;)
Read more
4 people found this helpful
Report abuse

Yank
5.0 out of 5 stars Love Love Love The Proclaimers
Reviewed in the United Kingdom on September 2, 2018
Verified Purchase
"Angry Cyclist" is another worthy member of their marvelous catalog. This one is heavy on uptempo songs but the two midpaced singles, "Angry Cyclist" and "The Streets Of Edinburgh", are exquisite also. I live in the U.S. and it irritates me this band isn't more appreciated. If I had to compare this release to another of theirs I'd say "Let's Hear It For The Dogs" and "Restless Soul".
Read more
4 people found this helpful
Report abuse
See all reviews