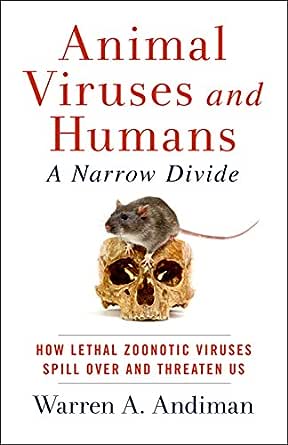 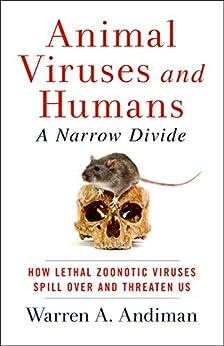 Animal Viruses and Humans, a Narrow Divide: How Lethal Zoonotic Viruses Spill Over and Threaten Us Kindle Edition

"A frighteningly fascinating reminder of just how closely connected human health and the planet’s ecosystems are."―Booklist

"Andiman gives you a front row seat in the ongoing battle between man and disease . . . Gripping stories, filled with details that are in equal part delicious and disgusting, but always fascinating."―Lisa Sanders, MD, author of Every Patient Tells a Story and the New York Times Magazine "Diagnosis" column

“Dr. Andiman was at the forefront of the HIV/AIDS epidemic in America, so he knows as well as anyone the disrupting power of new viruses and their impact on human societies.”―Peter Hotez, MD, PhD, Dean, National School of Tropical Medicine at Baylor College of Medicine

Dr. Warren Andiman is Professor emeritus of pediatrics and epidemiology at the Yale Schools of Medicine and Public Health. He received his medical degree from Albert Einstein College of Medicine in New York and completed his pediatric residency at Babies Hospital, part of the former Columbia-Presbyterian Medical Center. After serving a two-year stint as a Captain in the U.S. Army Medical Corps, he pursued a post-doctoral fellowship in pediatric infectious diseases at the Yale School of Medicine and joined the faculty on which he served for forty-two years.

At the start of the AIDS epidemic Dr. Andiman, with his associates, created the Pediatric AIDS Care Program at Yale-New Haven Hospital and served as its medical director for thirty-two years. He lives in Connecticut with his wife, also a pediatrician. They have two daughters.

4.8 out of 5 stars
4.8 out of 5
30 customer ratings
How does Amazon calculate star ratings?
Amazon calculates a product’s star ratings based on a machine learned model instead of a raw data average. The model takes into account factors including the age of a rating, whether the ratings are from verified purchasers, and factors that establish reviewer trustworthiness.
Top Reviews

Dr J
5.0 out of 5 stars Fascinating and important book
Reviewed in the United States on December 21, 2019
Verified Purchase
I read Dr. Andiman’s book, “Animal Viruses and Humans, a Narrow Divide: How Lethal Zoonotic Viruses Spill Over and Threaten Us”, with great anticipation and interest as I trained as a virologist and, in addition to being an infectious disease physician, had 4 years of experience as an acute disease epidemiology. I enjoyed the book immensely for many reasons. It was very readable and had fascinating stories about the relationship of viruses and humans. Each story is factually accurate and had enough detail to allow the reader to come away with a picture showing how narrow the divide is between we humans and the viruses that can cause great human suffering.
Dr. Andiman, a physician-scientist with expertise in virology, provides an in depth but understandable look at the world of viruses with information on how they cause disease, evolve by undergoing mutation-driven changes that allow them to adapt to new environments and hosts, including spilling over from animals to humans. Dr. Andiman discusses how human behavior and environmental changes promote outbreaks and epidemics.
Despite my extensive knowledge of the subject, after reading the book, I began to look at the intersection of viruses, humans and the environment in a new integrated manner. I applaud Dr. Andiman for sharing his knowledge and insightful ideas in such an interesting manner that will appeal to academic and nonacademic audiences.

Steve F
5.0 out of 5 stars Need-to-read for anyone working in the Covid 19 pandemic
Reviewed in the United States on March 21, 2020
Verified Purchase
My career was in animal disease eradication, control and prevention at a national and international level. I have bought multiple copies of Dr. Andiman's book to give to the doctors and town emergency managers because his straight forwarded description in two of the chapters of what happened with the Mediterranean Respiraratory syndrome virus and SARS virus, both closely related to the Covid 19 virus, is the best information for understanding the big picture of the current situation. Dr. Andiman published this book in 2018 before the Wuhan outbreak.
Read more
26 people found this helpful
Helpful
Comment Report abuse

Diane Munz
5.0 out of 5 stars Microbiology that reads like a murder-mystery!
Reviewed in the United States on October 23, 2019
Verified Purchase
This is a thrilling collection of stories about viruses that impacted the modern world, with stories about the real people, often kind and well meaning people, who helped sick animals and inadvertently spread viruses into the human realm, with devastating consequences.
Read more
14 people found this helpful
Helpful
Comment Report abuse

K. L Sadler
5.0 out of 5 stars Incredibly important book especially now...where COVID19 came from!
Reviewed in the United States on May 26, 2020
Verified Purchase
Wow...it's really too bad that there are so few intelligent people in Washington DC who can read. I'm on a kick reading books that apply to COVID19. I teach physiology, pathophysiology, and infectious disease is kind of my thing since I worked with HIV for four years. This book is soo important to read, because as man increasing comes in contact with animals that we don't usually 'live' with, we are exposed to their diseases. Just with the Human Immunodeficiency Virus which ultimately originated with bats, many other viruses usually start with bats. I'm pretty sure COVID19 original source is bats. We invade their forests, human beings eat them in places like China and Africa, and this leads to changes in viruses, and most often makes those viruses more likely to invade us as host organisms.

Andiman does an excellent job presenting different animals viruses that have crossed the barriers to infect us. He demonstrates how easily this is done. If you put together a list of all the viruses that come from animals that have the worst impact on humans beings...Andiman covers most of these in one form or another. Rabies is a killer of 100%, meaning without applying the vaccine (after the fact within 2 weeks) it kills 100% of the people with it. Rabies comes from bats and skunks, and dogs. HIV from bats and other primates. TB from cattle, we know COVID19 and SARS and MERS all come from either bats, birds, or civets (cat from China). The list goes on and on. The question right now, which Andiman also brings up in his book, is "when are humans going to learn?" When do we learn to respect nature enough to quit trying to misuse it's resources? If we don't learn, we will be responsible for killing off the entire race.

Very smart book. If you don't have any kind of a medical background it may seem like a slog even though I think Andiman writes well. But this is such an important book, that I will be recommending it to my students.
Read more
5 people found this helpful
Helpful
Comment Report abuse

Jeani Rector
2.0 out of 5 stars Not for the average reader (layperson)
Reviewed in the United States on June 10, 2020
Verified Purchase
Book review (non-fiction): ANIMAL VIRUSES AND HUMANS, A Narrow Divide by Warren A. Andiman. When I first saw the front cover, I thought it was self-published, but it isn't.

ANIMAL VIRUSES AND HUMANS is apparently meant for an audience of first-year medical students or epidemiologists.This book is definitely NOT for the layperson and the average reader. It is full of big medical terminology and is dry as cardboard. Instead of enjoying the read, I had to spend my time trying to understand it.

There is one saving grace chapter, and that is the one about rabies. Finally Andiman inserts some real cases to give it a personal feel. The chapter is interesting and even exciting.

But that is the only one. The rest of the book is more dull than I can express. Two stars for you and me, three stars for epidemiologists. There are better books about zoonosis out there.
Read more
4 people found this helpful
Helpful
Comment Report abuse

Amazon Customer Tanya
5.0 out of 5 stars Awesome. Very informative.
Reviewed in the United States on May 28, 2020
Verified Purchase
The book was easy for me to read. Some of the medical terminology was a little hard to pronounce. I did learn a lot about viruses and where some of the familiar I already knew came from. Also found out what it takes to get vaccines and medicine's to treat these viruses. It is a very informative book. I enjoyed reading it. I would recommend it to anyone who enjoys reading about medicine and even to those who have questions about viruses.
Read more
3 people found this helpful
Helpful
Comment Report abuse

LB
5.0 out of 5 stars Great knowledge
Reviewed in the United States on June 24, 2020
Verified Purchase
Exceptional speed and well packaged, thanks. This book is an eye opener with information we aren't told. I highly recommend this book for untold information and to get us thinking.
Read more
2 people found this helpful
Helpful
Comment Report abuse
See all reviews from the United States

Umberto Corbellini
5.0 out of 5 stars Updated and well written
Reviewed in Italy on April 1, 2020
Verified Purchase
My job and studies have nothing to do with the item. I choose to read an essay about the subject because I live in the area of Italy worst affected by the virus COVID-19. I choose this book because it is one of the most recent on the subject (2018), dealing of quite recent epidemics. I agree It is a very readable book, easy to understand also for non-specialist readers. It clarifies the dynamics of how viruses work and with fascinating stories about the relationship of viruses and humans.
Read more
Helpful
Sending feedback...
Thank you for your feedback.
Sorry, we failed to record your vote. Please try again
Report abuse