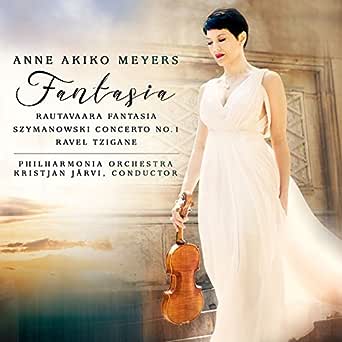 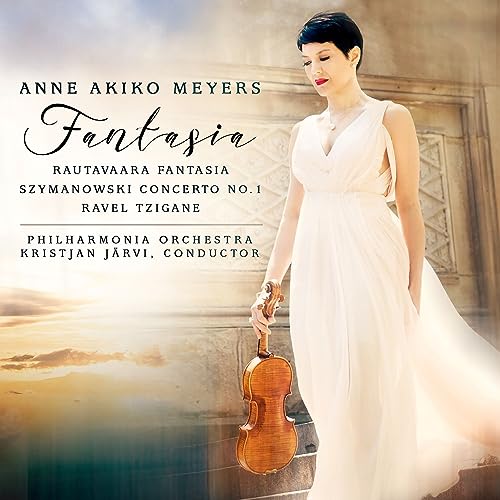 Dr. Debra Jan Bibel
TOP 1000 REVIEWER
5.0 out of 5 stars Sumptuous Colors of Violin and Orchestra
Reviewed in the United States on January 21, 2018
Verified Purchase
****1/2. Some artists and composers are never satisfied with their developed style and ever drift into new realms. Finnish composer Einojuhani Rautavaara composed with the zeitgeist of each era, from Neo-Classicism to angry Serialism to introspective mysticism. He died at age 87 in 2016, and among his final works is the featured piece on this album, Fantasia, commissioned for and performed here by Anne Akiko Meyers. She previously exquisitely rendered Samuel Barber's lush and beautiful violin concerto; this is a similarly sumptuous score. The Scandinavian vistas of forests, tundra, and ice are evoked, and when the work concludes after merely 14 minutes, we thirst for more. The first Violin Concerto of Polish composer Karol Szymanowski was written in 1916 but did not reflect the carnage of World War I but rather impressionism and tone poems and his experiences in North Africa. The uninterrupted 3-sectional work opens in Scheherazade fashion, a preamble violin narration, before the rollercoaster of emotions modeled on the poem May Night by Micinski. The orchestral colorful concerto is akin to the pen of Rimsky-Korsakov. The Philharmonia Orchestra is led by Kristjan Järvi (Neeme Järvi's younger son and brother of conductor Paavo Järvi and flutist sister Maarika Järvi). The final work on the album is Ravel's Tzigane, which serves as an encore. A technically virtuosic exemplar, the rhapsody performance here is more academic than bohemian. Together, however, the album is very fine, romantic music full of harmony and singing violin.
Read more
5 people found this helpful
Helpful
Comment Report abuse

P ski
5.0 out of 5 stars Dark and beguiling...
Reviewed in the United States on October 11, 2017
Verified Purchase
R Fantasia is a beautiful piece--I was in no way disappointed with the performance. Sy VC is marked incorrectly: 2nd movement should be Cadenza, and 3rd should be Allegro Assai. AAM gives a fine account of Ravel's Tzigane. Overall, an excellent album, highly recommended!
Read more
2 people found this helpful
Helpful
Comment Report abuse

Dean Frey
5.0 out of 5 stars I wrote such beautiful music
Reviewed in the United States on October 19, 2017
Anne Akiko Meyers brings her awesome technique and even more awesome instrument to bear in this beautifully romantic program. The disc includes a very fine performance of the first violin concerto of Karol Szymanowski, which is quite well represented on disc, but I was more interested in the opening work by Einojuhani Rautavaara that gives this CD its title. Fantasia, commissioned by Akiko Meyers, was one of the composer's final works completed before his death, a year ago in July. I love her stories about visiting the Rautavaara in his home to play through the work:

"After I played Fantasia, he looked at me and repeatedly said, 'I wrote such beautiful music!'"

This is, of course, the World Premiere recording of this piece, which I expect will soon become popular on the concert stage. With a significant encore in Ravel's own orchestral version of his Tzigane, this outstanding disc - and especially Rautavaara's Fantasia - will regularly show up in playlists on my computer and phone.

John J. Puccio
5.0 out of 5 stars The performances are sensitive and virtuosic, the sound excellent
Reviewed in the United States on February 4, 2018
Ever since I first heard violinist Anne Akiko Meyers some twenty years ago (as she was a child prodigy, she was already an established musician by that time), I sensed something special. Her playing radiated a sweet, gentle quality that was extremely calming and reassuring. With this album, Fantasia, she performs music that seems tailor-made for her, in the case of Rautavaara work, literally. And Maestro Kristjan Jarvi and London's Philharmonia Orchestra accompany her with the utmost in ravishing, sympathetic support. The album makes a winning combination.

The first selection on the program is called Fantasia, written on a commission from Ms. Meyers by Finnish composer Einojuhani Rautavaara (1928-2016). It was Rautavaara's last completed score, done the year before his death. As this was the music's first recording and he wrote it for Ms. Meyers, we will have to accept it as authoritative; not that I think anyone could do any better with it. It's a sweet, tuneful, Romantically inflected work, reminiscent to me of Ralph Vaughan Williams's "The Lark Ascending." As usual, Ms. Meyers plays with exactly the right touch and nuance to do justice to the score's enchanting beauty.

The second selection is the Violin Concerto No. 1, Op. 35 by Polish composer and pianist Karol Szymanowski (1882-1937). He wrote it in 1916, right at the start of the modern era of classical music, and it shows, eschewing some but not all of the Romantic overtones of the concertos coming before it and displaying a good deal of French impressionism as well. What's more, and despite its sometimes going against the grain of the age, it remains one of Szymanowski's most-popular pieces.

The opening passage of the concerto reflects its delicacy, conjuring up poetic images of the line that inspired it: "fireflies kiss the wild rose." It's a lovely piece of music, with evidence of Debussy and Ravel, making it the perfect vehicle to display Ms. Meyers's intricate and expressive technique. I also hear hints of the exoticism of Rimsky-Korsakov in the second and third movements, too, and the charming lilt and dance of Mendelssohn. To say Ms. Meyers does the music justice is an understatement.

The final piece on the program is probably the most well known: "Tzigane" by French composer Maurice Ravel (1875-1937), a work Ravel premiered in 1924. Like Rautavaara's Fantasia, "Tzigane" is a brief, rhapsodic piece, although, as "Tzigane" means "gypsy," the latter has a more gypsy-like character to it. Ms. Meyers captures the mood of the piece, although she doesn't impress with it quite as much as she does in the preceding works, perhaps because the Ravel music is more commonly recorded. Repetition kind of dulls one's appreciation for a new rendering; however, rest assured that Ms. Meyers does it as well as anyone. Ravel, after all, meant the score as a virtuosic showpiece, and Ms. Meyers plays it in her own sensitively virtuosic style.

Producer Anne Akiko Meyers and engineer Silas Brown recorded the music at London Air Studios in May 2016. The sound is most realistic, especially in the placement of the violin just slightly in front of the orchestra but not in our face. This soloist-orchestral integration is further enhanced by the mildly pleasant ambience of the studio setting, which just slightly reflects some reverberant bloom. The frequency response is neutral, the dynamics more than adequate for the occasion, and the instrumental detailing about what one would expect to hear from a tenth-row center seat in a real concert hall. It's all quite pleasant.