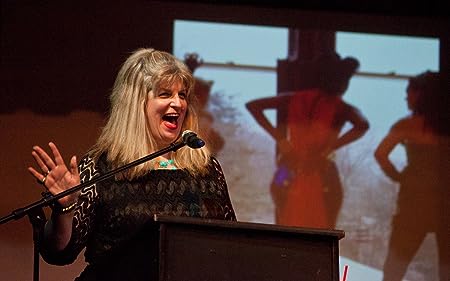 Her latest book, MESSIAH, is a conspiratorial call for radical hope. It sets the Bible passages that inspired Handel's Messiah Oratorio in the American landscape. It hums, bops and sings in the cadence of American music and comments on us through our musical tastes. It is a collection that makes the reader want to get up and dance, hug his or her momma, and forgive his or her enemy.

Her book, POLITE OCCASIONS (released in 2018), is about the perilous times in which we live (Russian hacking? Last Days?) and how women are responding to them (or not). Women are hinding out in the resistance, but might they also be hidden in gatherings of the establishment elite? And are these the Last Days? Are we about to get raptured into Heaven or disappeared by an evil regime? And how does one keep one's hope in an era where at many moments divine intervention seems unlikely?

Her book THE WHITE TRASH PANTHEON (released in 2014) sets the ancient Greek myths in the deep South as a way to engender discussions of white privilege, the South's lost cause myth, and the current relevance of both classical and Southern literature in America today.

She has a new poetry chapbook which will be released in August of this year entitled DOLLY SHOT -- a commentary about how women are portrayed in Hollywood. Her chapbook POEMS UNDER SURVEILLANCE discusses the post 9/11 crisis in American culture -- where Edward Snowden unveils America is wiretapped while we stalk each other on Facebook and Twitter.

The libretto she wrote for Chinese-American composer Su Lian Tan's opera LOTUS LIVES engages the problem of gender and ethnic identity that many American women share, where living with one foot in one culture and the other foot in another culture -- the problem of the hyphenated American identity, Chinese-American, Irish-American, African-American, and many other hyphenated American identities -- means one is likely misunderstood and mismeasured by both cultures, not really entirely belonging to either.

She was recently included in the much-discussed NASTY WOMEN POETS: AN UNAPOLGETIC ANTHOLOGY OF SUBVERSIVE VERSE. Her spoken word poetry was featured on a gospel hip-hop CD THE CORNERSTONE, recorded at a studio in the Bronx where it is entirely possible that Anne was the only Caucasian ever to lay down a track. How can this cross-genre and cross-experiential writing be from one woman? It is a central principal of Anne's aesthetic as a poet to write back to a wide variety of American idioms, celebrating American voices of a wide diversity without appropriating any. She seeks, as NEW YORK NEWSDAY once quoted her as saying, to stretch the American literary canon to encompass as many different experiences as possible. The American voice is legion, not singular, and Anne attempts to embrace its whole cacophony.

Anne's work has appeared in literary journals on five continents, and she has been anthologized in both the United States and the United Kingdom. She has read her poetry on radio and television. Her blog THE CARPETBAGGER'S JOURNAL about her culture shock moving from Brooklyn to the Deep South is widely read and has been picked up and reblogged by cultural and political websites.

Astonishingly, her manuscript for THE WHITE TRASH PANTHEON won a prize from the 2014 Southern Writers Southern Writing competition -- a prize honoring the best and the most Southern works presented there. She is the first Yankee to win this deeply Southern literary award and thereby challenges Mason-Dixon Line divisions in American writing. POLITE OCCASIONS is less twangy and more Chi-O, but it is a genteel Southern work with many weekend trips to Northern cities and other places.

If Mark Twain could move to Connecticut to write his many Southern novels, Anne reasons, there's no reason why a transplanted northerner might become, with enough of what Eudora Welty referred to as "compassion" for her characters, a Southern writer. Trained in New York, living South, and published internationally, Anne Babson is therefore a truly American poet. 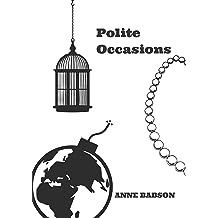 Polite Occasions Mar 31, 2018
by Anne Babson
( 3 )
$4.99
"Polite Occasions" writes back both to Revelation and Emily Post because it imagines the future is female, that she is a lady, and if the human race Is to survive what evangelical Christians call “end times,” it will be because ladies have decided to make unladylike plans. This collection is largely set in a dystopian near-future world where political structures have become authoritarian and many feel spiritually adrift, all while most people pretend not to notice. It examines the ways in which silence renders people complicit with oppression in all its forms. It earnestly explores faith through doubt and disappointment. It might even be called a Christian poetry collection, though it is surely one that some right-wing Christians would like to burn. It is an unapologetically feminist work as well, one that understands that the oppression of women often gets enacted in the name of false gods. The poems of this collection speak their exhortations to the reader in both formal and free verse in a high vernacular that considers contemporary life in reference to much older texts. Some of the works of this collection have won prizes, and many have been published in journals in North America, Europe, and Asia. The collection stands as a warning to both the faithful and faithless that we live in an era where we might fall under an Orwellian regime infused with religious language and that democracy might fall while we take selfies.
Read more
Other Formats: Paperback