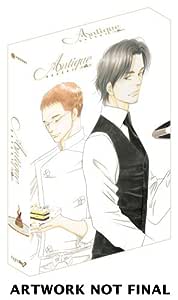 In food and in life, one must taste what is bitter to appreciate what is sweet... Troubled that memories of the past continue to invade his dreams of the present, Keiichiro Tachibana stuns all who know him by abruptly quitting his ordinary office job to open a bakery. He envisions a predominantly feminine clientele and a wait staff of cute girls. Instead, his employees include a playboy patissier who's been fired from every job he's ever had, an ex-boxer with an insatiable sweet tooth, and an absent-minded childhood friend and family servant. Can this unlikely quartet overcome personal tragedies, learn to work together, and discover a recipe for culinary success? The Antique Bakery DVD Collection features the complete, 12-episode television series with Japanese audio and English-language subtitles. In comes in a deluxe collectors' art box, and its on-disc extras will include the clean opening and closing, live event coverage, and an interview with AKB48 member Tomomi Kasai, who voices a supporting role in the series. Additionally, the set will include a special booklet that contains character bios, quick facts, featured desserts, and two interviews with all four lead voice actors, as well as manga creator Fumi Yoshinaga (Ooku: The Inner Chambers, Not Love But Delicious Foods Make Me So Happy!). Fumi Yoshinaga's original manga received the 2002 Kodansha Manga Award for shoujo (girls') manga and also served as the inspiration for both a live-action Japanese television drama and a 2008 live-action Korean film adaptation.

Erin
5.0 out of 5 stars A complete collection is better then just one
Reviewed in the United States on March 12, 2013
Verified Purchase
I love having complete collections not only does it save more space on your book case but it also has all the episodes that you can watch again and again. This anime had pretty artwork and i love the plot just wish they made more of this anime.
Read more
Helpful
Comment Report abuse

Gamescook
3.0 out of 5 stars Not a bad adaptation.
Reviewed in the United States on April 14, 2011
Verified Purchase
Cliche to say, but the book was better! The show could have stood to have some better direction and pacing, and less music and melodrama. It's actually all right besides, though! Has one of the better depictions of gay men in anime, but that's not saying much giving the medium's consistently poor representation of the demographic. Again, not the best, but there are much, MUCH worse out there. Consider giving it a shot. Hopefully we will someday see more adaptations of Antique Bakery's original author's work such as "What Did You Eat Yesterday?" or "The Moon and Sandals".
Read more
3 people found this helpful
Helpful
Comment Report abuse

The Yaoi Review
5.0 out of 5 stars Antique Bakery serves up a delicious storyline with a healthy dose of humor and a smidge of mystery on the side
Reviewed in the United States on April 4, 2011
If you like yaoi, this review is geared for you. If you do not, this review will let you know if you have anything to worry about. ;-)

If you love gorgeous desserts then go pick up a copy of Antique Bakery. The rest of the story will just be icing on the cake. Get it? Cake? It's a bakery. Ok, I'll stop now. Although Antique Bakery appears to be very lighthearted there is layer of dark undertones and mystery spread throughout that will at times leave you feeling a little uncomfortable, but that's what good story conflict is supposed to do. One moment you find yourself laughing hysterically at Ono's seductive rain dance, the next you're faced with how Tachibana's childhood trauma still affects those around him. Consider Antique Bakery comparable to Junjo Romantica except with conflict that will affect you on a much deeper level.

There are four main characters in the story and each one develops nicely as the story goes on. Tachibana is the character most focused on and he's the one that brings the mystery to the story. He's plagued by nightmares over a childhood tragedy and it's this tragedy that brings the most depth to the story as well as darkness. Although he comes off as uncaring and a bit prickly, we see how much he truly does care for those around him, strangers and friends alike.

Ono I found to bring the most humor to the story with his crazy antics as the "Gay of Demoic Charm", but he too becomes so much more. We see how he struggles with the career he's chosen and the memory of the harsh rejection of his first male love. He very much has a split personality between a gay playboy and a sweet if not sometimes tortured soul.

Kanda blossoms as an assistant pâtissier. Having been forced to leave the world of boxing, he dives headlong into baking but his determination to improve hides his ultimate fear.

Chikage at first seems to be the least developed of all of the characters and it isn't until much later in the episodes that we get introduced to his personal life and past. I think it's this delay that adds to the story. With four characters introduced early on, we don't find ourselves overwhelmed with too much character background.

I've battled over and over in my mind whether Antique Bakery would be considered yaoi. There are definitely yaoi elements within, including Ono's various gay relationships and his secret power to make any man `gay for you'. However, yaoi is about a specific relationship between two men and Antique Bakery does not focus primarily on a romantic relationship. There are a few different storylines going on involving each character that makes Antique Bakery what it is. So for our purposes and to clarify the sexual content, I would merely say that it closely resembles light yaoi.

There are gay relationships and characters that do have sex but there is nothing explicit and the most we see is some fooling around or two men in bed after the "deed" is done. Still, it's more than we ever got in Togainu no Chi or Betrayal Knows my Name so I'll take it! I would have liked to have seen more of the one relationship that started between two of the characters but just as quickly as it started it was never really addressed again, which is unfortunate.

The animation in Antique Bakery is definitely unique when compared to what we usually get. There is a combination of 2D, 3D and real elements used throughout. I think the intro is interesting with the paper stand-ups of the characters within what appears to be a real miniature representation of the bakery. The intro song "Life Goes On' by Chemistry is quite catchy and you'll most likely find yourself wanting to get a hold of it after it's done.

I've gone back and forth with how I feel about the frequent use of 3D in the background and the use of 2D on the characters. It can be jarring at times and other times I've found it enjoyable. I think the introduction's use of 2D stand-ups in a 3D environment was intentional and meant to represent the animation style of the anime itself.

Antique Bakery serves up a delicious storyline with a healthy dose of humor and a smidge of mystery on the side. Foodies and non-foodies alike will love the detail given in the dialogue, animation and special booklet to the various dishes served. Antique Bakery goes down in my book as a must have for any yaoi fan. Not a yaoi fan? You don't have to be. Just bring an open mind and a sweet tooth.

Plot: A
Character Development: A
Sexual Content: N/A
Animation: A-

Astral
4.0 out of 5 stars The Storyline and Characters Shine Through
Reviewed in the United States on April 13, 2012
It's mainly about a man with a dark past... Tachibana is a former kidnap victim, one that was saved, although his kidnapper was never discovered. Now, about twenty years after his ordeal, he leaves an office career to step into the role of being the owner of a bakery. Not just any bakery, but a cake shop that specializes in French cakes. Curious, since he doesn't even particularly like sweets... the rest falls into place, as a former classmate is hired as the bakery's pâtissier. He has caused trouble in other pastry shops in the past, and has quite the reputation, since no man can resist the "Gay Demon Charms" of Yusuke Ono. Add in two more characters, Tachibana's childhood friend who feels he must watch over him (and also works for their family) and a young former boxing champ who trades in his gloves for a chef's uniform, and Antique Bakery is off to a grand start. The show focuses on the relationships between these four men, their pasts and ultimately a kidnapping mystery that may or may not tie into Tachibana's ordeal from his past.

The first episode is a bit of a turnoff, but it's a hurdle worth jumping over. The rest of the show is not nearly as flamboyantly outrageous as that first one, nor does it ever sink to such blatant yaoi levels again. The relationships are treated with more sensitivity and realism. Sexual content is almost non-existent. There is some male/male kissing and a little fully clothed cuddling (and a very silly, ridiculous dance in the rain), but no actual sex or nudity takes place.

The art direction is unusual, with CGI, realism photos and 2d animation all working together in somewhat harmony. You get used to it after awhile, although some of the CGI work is a bit sparse and clashes with the animation. Colors are subdued and realistic, like you would expect from an antique store, and the desserts are drawn fabulously. They just pop right off the screen, elegant and dainty, both.

If you enjoy character driven narratives and slice of life situations, then this is a sweet bet that you are sure to enjoy. Antique Bakery has a few laughs, keeps you entertaining and the undercurrent storyline runs right through it. The only disappointments are a relationship between two of the characters that is never mentioned again, which feels odd since it would have lent more depth to the story if it had been more established. It's flash and the pan and forgotten. The other is with Chikage's past also not given more development. There's one episode dealing with one of his issues, but like the tossed away relationship, this is given no further mention either. Other than those two nagging issues, which are secondary to the main plot anyway, Antique is a thoughtful, relaxing series. Something that anime, in general, could use more of.
Read more
One person found this helpful
Helpful
Comment Report abuse
See all reviews