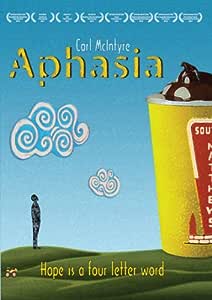 "Aphasia" is the true story of Carl McIntyre who, after suffering a massive stroke and losing his ability to read, write and talk, struggles against overwhelming odds to redefine his life. Carl McIntyre stars as himself and gives a compelling and nuanced performance in this life-affirming film which puts the audience in the seat of the stroke and provides an emotional and humorous ride as Carl navigates the waters of his new normal. 2010, Main Feature 40 minutes. Over 100 minutes of Extra Features! Including: -Extensive Interviews with renowned Speech Pathologist Dr. Nancy Helm-Estabrooks, -Interview with Denise Caignon, MS, CCC-SLP, Carl's Speech Pathologist, -"Finding Purpose" (Behind the Scenes Documentary), -"Next…" (Fundraising Documentary), -Deleted Scenes *Winner - 2010 - Big Bear Lake Film Festival *Winner - 2011 - Feel Good Film Festival (Los Angeles) - Film and extra features are not rated. Contains adult language.

4.4 out of 5 stars
4.4 out of 5
31 customer ratings
How does Amazon calculate star ratings?
Amazon calculates a product’s star ratings based on a machine learned model instead of a raw data average. The model takes into account factors including the age of a rating, whether the ratings are from verified purchasers, and factors that establish reviewer trustworthiness.
Top Reviews

Dawn Plunkett
4.0 out of 5 stars Great to help others understand what my husband is going thru
Reviewed in the United States on September 5, 2019
Verified Purchase
This is a very good first count of something we as a society have very little insight into. This is a first hand account of what someone with aphasia is going through, living with...etc My husband with aphasia watched it and part of the interviews. He is not able to watch for too long but he is interested to see more. This for us is a huge step.
Read more
One person found this helpful
Helpful
Comment Report abuse

Amazon Customer
5.0 out of 5 stars Hits home.
Reviewed in the United States on December 26, 2019
Verified Purchase
My partner, who was two months post stroke with global Aphasia and apraxia, was pretty emotional after seen the movie. He was most impressed by the empathetic fast food worker. This movie is great for anyone, and I think everyone should see it, as that would help bridge the huge gap in awareness of this hidden disability.
Read more
One person found this helpful
Helpful
Comment Report abuse

Andaluza
5.0 out of 5 stars Aphasia, The Movie
Reviewed in the United States on July 22, 2012
Verified Purchase
Few people with aphasia(speech and communication difficulties) can even begin to describe their situation to others. They often can not say their name, write their phone number, read a sign, or understand a simple command, let alone explain why they can not speak effortlessly.

Carl McIntyre, a former actor, stars in his own film, and shows through speech, gesture, and uncomfortable silences, the challenges he, and so many others, face, all day, every day, usually for the rest of their lives. Like most, he had to give up his former career after a massive stroke. Almost every form of work requires speaking, reading, writing, or listening comprehension. Unlike most, he was able to create this extraordinary film, with the help of therapists, family, and a loving community of friends.

Mixing humor, heartbreak, frustration, and acceptance, the story shows Carl's adaptation to his profound loss of language. It also shows that he did not lose his enthusiasm, intelligence, drive, and willingness to participate in life. Extra footage also reveals the progress that he made in the years that followed. Two interviews with speech therapists are also very instructive for anyone wanting to know more about aphasia.

This is a wonderful film for general audiences. It would be an excellent resource for speech therapists and students, as well as, aphasia patients their families and friends.

Mary Detwiler
5.0 out of 5 stars Great movie
Reviewed in the United States on June 30, 2013
Verified Purchase
Speaking as someone who works with people who have aphasia, I think this is a wonderful film. It very successfully shows some of the difficulties a person with aphasia experiences in communicating with the rest of the world. But it also provides hope that with time and patience, things do get better. Family members who see this film often have a greater appreciation for some of the challenges that their loved ones face. For anyone who doesn't have aphasia, it's a great reminder to slow down and work with the people around us. We've shown this movie to our families living with aphasia, speech language pathologists and other staff members - ALL came out raving about how hopeful this movie is. I highly recommend it.
Read more
4 people found this helpful
Helpful
Comment Report abuse

Fair Reader
5.0 out of 5 stars Inspirational and informative
Reviewed in the United States on July 3, 2013
Verified Purchase
This short movie is actually very entertaining to watch, but it is informative and inspirational as well. There is some profanity in it so watch it yourself first, and then you will likely decide that you want your kids to see it too. My heart goes out to those struggling with aphasia and I am grateful for the encouragement this movie must surely provide them. Watch it, you will be so glad you did.
Read more
One person found this helpful
Helpful
Comment Report abuse

Speech-Language Pathologist
5.0 out of 5 stars Aphasia, The Movie
Reviewed in the United States on August 23, 2012
Verified Purchase
This is an outstanding film that shows the impact of aphasia (following a stroke) on the life of Carl, his family, and his community. The story is uplifting. It communicates clearly and concisely what it must feel like to meet the challenge of losing one's language and the challenge of working hard to regain it. Carl will inspire all who see this film. Just as important though are the bonus material interviews with Carl's speech-language pathologists, Nancy Helms-Estabrooks and Denise Caignon. They demonstrate the science and the compassion behind this intensely gratifying profession. It's a must see for persons with aphasia, their families and friends, and all those who dedicate their professional lives to working with individuals with this disorder. Highly recommended for use in aphasia courses.
Read more
2 people found this helpful
Helpful
Comment Report abuse

Anthony W. Eichenlaub
5.0 out of 5 stars Eye opening, clever, and worth watching twice
Reviewed in the United States on November 16, 2013
Verified Purchase
I had my doubts when my wife put this movie in, but I was very wrong. It is clever, funny, and very touching. I'd never really understood anything about aphasia, but now I think I understand a little about the frustration. It's definitely worth watching, even if you do not personally know someone affected by aphasia.
Read more
3 people found this helpful
Helpful
Comment Report abuse