You've subscribed to Pool of Souls! We will preorder your items within 24 hours of when they become available. When new books are released, we'll charge your default payment method for the lowest price available during the pre-order period.
Update your device or payment method, cancel individual pre-orders or your subscription at
Your Memberships & Subscriptions
There was an error. We were unable to process your subscription due to an error. Please refresh and try again. 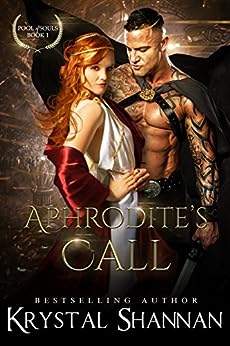 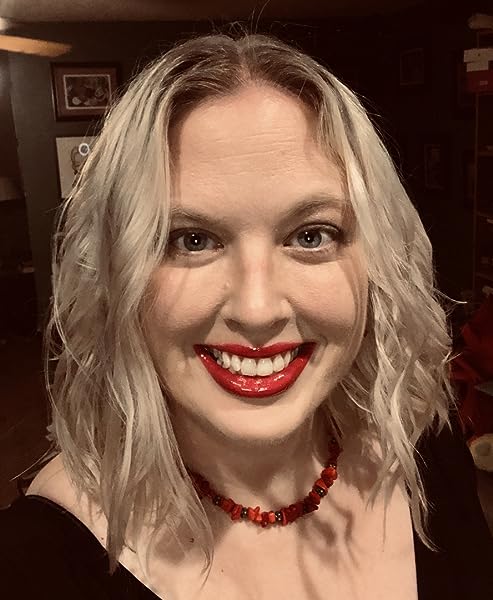 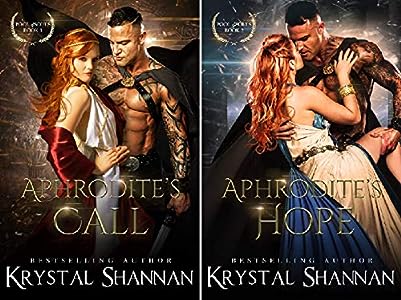 From the Author
JOIN KRYSTAL SHANNAN'S NEWSLETTER!
Copy and paste this site address into your browser's address bar: eepurl.com/qvKYL
Want MORE from Krystal Shannan?
*Site: krystalshannan.com
*Twitter: @KrystalShannan
Don't forget to leave a review!
Please take a moment to leave an opinion about this book! Readers really rely on reviews and your opinion can help others decide on future purchases. Make sure your vote counts!

4.4 out of 5 stars
4.4 out of 5
110 global ratings
How are ratings calculated?
To calculate the overall star rating and percentage breakdown by star, we don’t use a simple average. Instead, our system considers things like how recent a review is and if the reviewer bought the item on Amazon. It also analyzes reviews to verify trustworthiness.
Top reviews

Bookaholic
1.0 out of 5 stars Insta-Love, Greek Mythology, and a Purple Butt Plug
Reviewed in the United States on August 13, 2015
Verified Purchase
Having been lured into reading this by the 4 and 5 star reviews, I would like to provide feedback of a different nature. Since I did not bash the reviews of those holding an opposite point of view, I am hoping for the same consideration.

1. This novella features insta-love that makes the speed of light appear slow. The whole relationship is wrapped up within a week.

2. Our hero tutored the leading lady in algebra during high school. They never went out because he never asked her. We are supposed to believe that this non-relationship spoiled her for all other men. "She had closed herself off to ever finding another man who measured up to him." WHAT??? Algebraically? His ability to solve for x?

3. I found it odd that the author stressed the ten year gap between high school and the present. Given that most graduates leave high school at 17 or 18, it was odd to have the heroine be 30 in this novel. Short bus?

4. Our poor leading characters have both been in a sexual vacuum with the hero having been celibate for 5 years. I guess that explains the rush...

5. We are supposed to believe that they have been longing for each other (even though they never went out) for a decade, but neither made a move to go to their ten year reunion where they could have feasibly reconnected. The hero deliberately attends a community event where he thinks he will find the heroine. He SEES her, but does not approach her because she is with some girlfriends and he doesn't want to interrupt. Is he a man or a mouse???? How does this mesh with the whole corporate tycoon he is supposed to be?

6. The obvious solution if you are too shy to approach someone in public is that you MOVE YOUR COMPANY, putting government contracts in jeopardy, PRIOR to speaking to the woman you have feelings for (but haven't talked to for a decade) on the basis that you didn't see her wearing a ring all those months ago. That sound you just heard was the believability elastic snapping.

Potential spoiler info: If you have read points 1 through 6 and see no problems, get downloading the novella and skip the rest of this review.

7. Our heroine is a 30 year old virgin. Personally, I find this overused, but having known ONE such female in my life I am willing to go along with it. Unless she knows NOTHING about her anatomy, wouldn't it be an odd decision to have sex for your FIRST time on a wildly expensive, new bedspread thrown on the floor?? No further gory details required.

8. What is REALLY not okay, is that there is NO discussion about contraception until the morning after when an alarm reminds the heroine to take her birth - control pill. A hero without condoms is a zero. At the very least, have the discussion ahead of time.

9. So, that leaves the whole gratuitous butt plug... I'm not touching that one literally or figuratively. You're on your own.
Read more
18 people found this helpful
Helpful
Report abuse

Sapphire Kande
5.0 out of 5 stars Outstanding!
Reviewed in the United States on March 18, 2013
Verified Purchase
When I first opened the book "Open House" by Krystal Shannon and saw the name "Aphrodite" I knew it was going to be amazing! Aphrodite is the goddess of love and in this book we see as she watches over two humans and their love story. Rebecca and Robert were two humans who met at an open house only to realize that they have known each other since high school.

Now, I totally can't say anything else about it because I don't want to spoil it but when Aphrodite's plan for love becomes a game with Ares, the god of war, things become heated. You totally need to read this book on your own to see just how amazing and awesome it is. Having Aphrodite and Ares together, fighting over the souls and both working their magic over these humans lives makes the book so much more interesting. The human characters as so well developed that you can easily fall in love with them and then become angry when Ares interferes. Oh I just adore this book!

It isn't just your standard love story. It's a love story with an incredible twist since everything can be changed when dealing with the gods. I highly recommend this story for anyone who loves romance. There are two wonderful romance stories happening at once and it is just amazing how it is laid out. It is extremely addicting and well done that I couldn't put it down until I finished it. I've never seen anything like it before and I've already got the next one to read! I give this story five wonderfully deserved stars.
Read more
One person found this helpful
Helpful
Report abuse

Kindle Customer
2.0 out of 5 stars Not Best
Reviewed in the United States on July 9, 2018
Verified Purchase
I struggled to get into this. I think it might have been a blend of issues. The relationship was so forced and the situations all felt contrived. I mean seriously if he likes her and knows where she works why not just call her and ask her for some coffee? If people do strange things just to serve a story you can feel it. There wasn't any reason to care about the characters and I didn't really get a point to story other than insta-love. In addition to that there were technical issues that also disrupted flow, such as no paragraph breaks between characters actions. I'll skip the next part.
Read more
Helpful
Report abuse

Jeannie P
5.0 out of 5 stars Quick and Fulfilling Read
Reviewed in the United States on May 1, 2013
Verified Purchase
Pool of Souls is a fast read but it is very fullfilling and leaves you wanting to know more. Krystal Shannan is great at doing that... I hate and love how she does that because i don't like waiting as i want to keep reading(smart... very smart lady).
I loved everything about it even though it was this book was about Rebecca and Corvin reconnecting and Aphrodite making sure their souls unite/bond and forever being connected; I have to say Aphrodite and Ares stole the scene.

I loved the inner fighting between Ares and Aphrodite(that girl has some serious power and a wicked temper). There is so much sexual tension between them and they both know how to get each other going.

Having Rebecca and Corvin connect after so many years when both secretly wanted each other in high school, was great. The cheerleader and her tutor both now grown.. throw in mediling gods, minons and a stalker ex you get a great read which never feels rushed or lacking.

I can't wait to read book two because Aphrodite and Ares burned up the sheets and had me wanting more of them.
Read more
Helpful
Report abuse

VaWineLover
5.0 out of 5 stars Hot, hot men
Reviewed in the United States on January 15, 2018
Verified Purchase
Aphrodite is determined to join soul mates Rebecca and Robert, even if she has to fight dirty to block Ares' interference in her plans.

Robert has decided to move his business back to his hometown of Houston in the hopes of winning the girl he once tutored and has never forgotten. Rebecca can't believe her high school crush has requested she show him a large property outside of Houston. Surely he can't remember her.

I liked the two main lovers and throwing in the Aphrodite/Ares dispute was genius. This gave us two hot, sexy couples for the price of one.
Read more
One person found this helpful
Helpful
Report abuse
See all reviews

Terrie
4.0 out of 5 stars Good Short Read
Reviewed in the United Kingdom on June 1, 2013
Verified Purchase
Open House: Pool Of Souls Book 1
I stumbled across this author on Facebook & decided to give one of her books a go.
The book is a short read and is a fab light read. There are 2 stories going on within the book. There are a number of different POV's in this book and I love how they are clearly defined, so there is no confusion as to whose POV you are reading from at any time.
The book starts off with `Ditee' (Aphrodite) and Ares and their tug of war over Rebecca & Robert. For a short story the book is well written and doesn't feel rushed in any way. The scenes are well described as are the characters and you can see them as you're reading.
There are a few (coughs) scenes of a sexual nature, in the book and they are done really well. I love the way the relationship between Robert and Rebecca develops and as they have known each other since school the relationship progresses as it should. I love the shock that Robert gets, so didn't see that coming hahaha.
There were quite a few goofy grin moments in the book, which is a feat in itself as I tend to not find funny books funny.
I haven't given the book the full 5 stars as I have a huge bug bear with the lack of use of abbreviated words. I know this is a personal bug bare but the author switches from using them to not using them quite a bit at the beginning of the book.
Read more
One person found this helpful
Report abuse

Maria Pearce
2.0 out of 5 stars Readable
Reviewed in the United Kingdom on October 8, 2012
Verified Purchase
I enjoyed this book however i feel that the characters were a little unbelievable. i felt like they could do with more background and normalcy about them. They were too perfect for me. I would look at more books from this author :)
Read more
Report abuse

sinita
4.0 out of 5 stars romance
Reviewed in the United Kingdom on August 22, 2013
Verified Purchase
This was a lovely book to read,it was reasonably priced and I would recommend it to my friends,it's well written with a good storyline
Read more
Report abuse
See all reviews