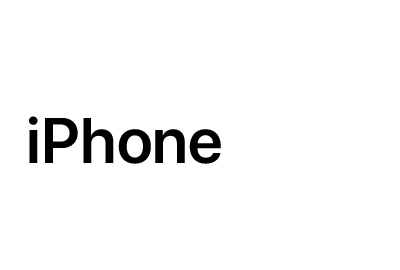 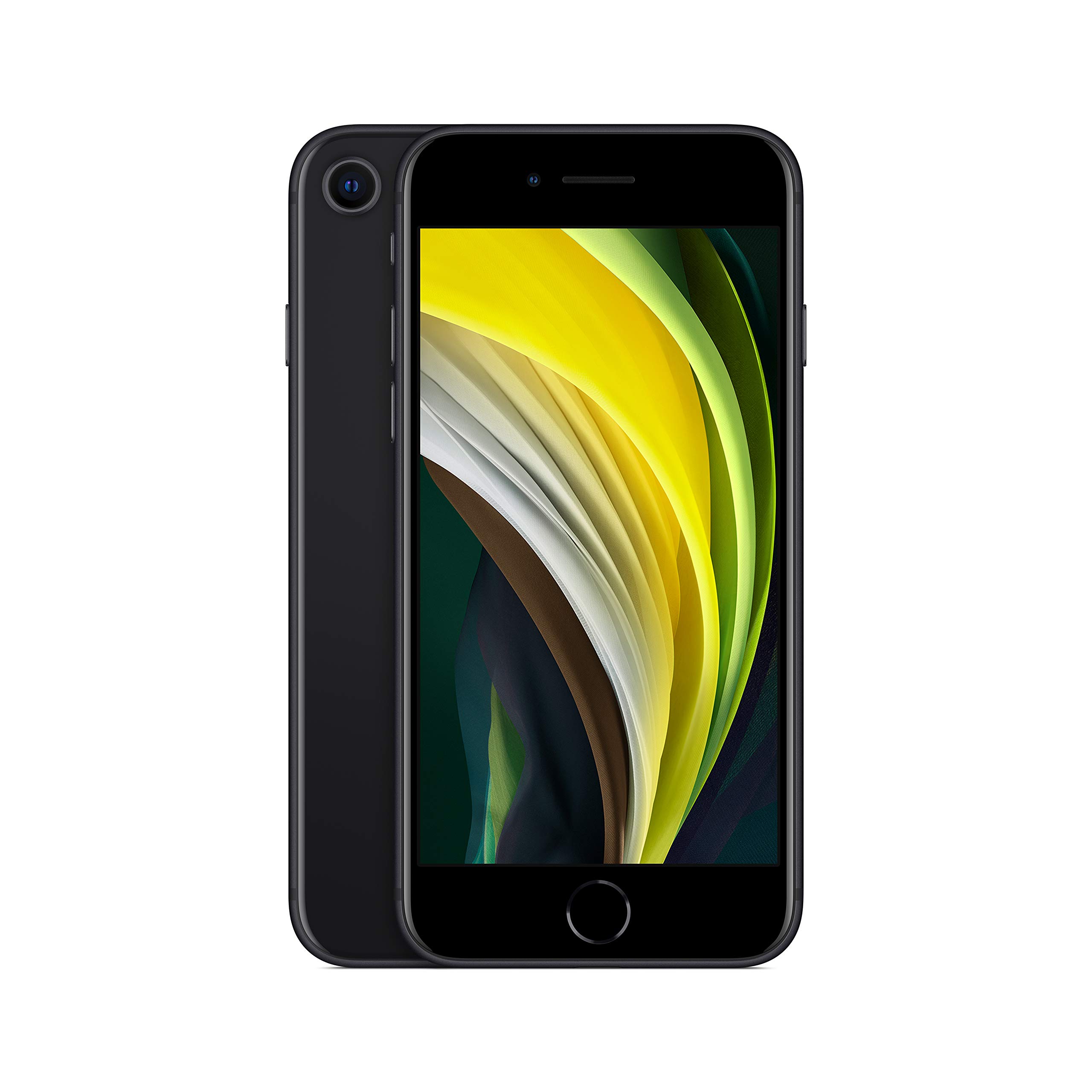 by Apple
6 customer reviews
|10 answered questions
Price:
$399.00& FREE Shipping. Details
This phone is locked and must be purchased with a monthly carrier subscription from Cricket Wireless available below.
Get up to $100.00 over 24 months on your Amazon Gift Card ($4.17/month every month you’re subscribed). Limit 1 iPhone and subscription per account.
Arrives: Thursday, July 9 Details
In Stock.
Ships from and sold by Amazon.com.
Black
64GB
Cricket Wireless LLCCoverage & subscription details

At Cricket Wireless, we want to make your wireless experience the easiest part of your life. So we provide the variety of phones and plans you want, without any annual contracts, hidden fees, and credit checks. And we support them with the quick, efﬁcient service that you need. That way, you can spend more time doing the things that make you happy—at home, at work, and in your community.
The following map shows an approximation of wireless voice and data coverage. SIM card is only available for shipment and activation inside the U.S. 50 states and the District of Columbia.See full coverage map 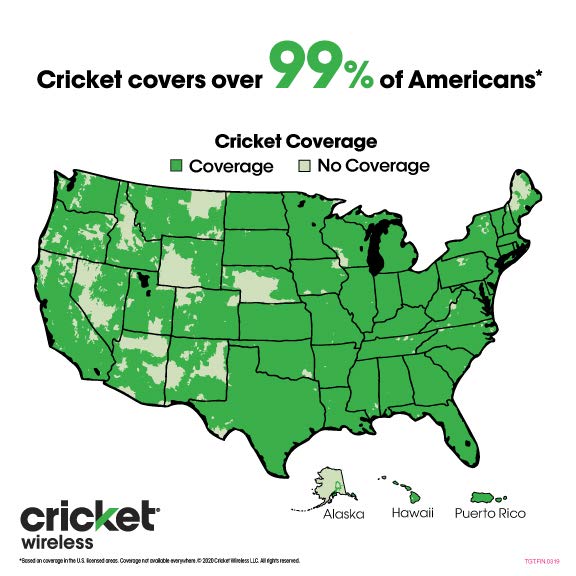 *Based on overall coverage in the U.S. licensed areas. Coverage not available everywhere. Map estimates outdoor coverage. Cricket 4G LTE coverage is not equivalent to its overall network coverage. [$55/mo CRICKET MORE SA PLAN]: Use your Cricket SIM Card to activate service on your compatible device within 60 days of purchase or your subscription will be cancelled and $55 refunded to your payment method on file. Plan Data Restrictions: For all data usage, Cricket may temporarily slow data speeds if the network is busy. Video streaming at SD quality. Plan includes up to 15GB Mobile Hotspot Data per month; then Mobile Hotspot speed slowed to 128Kbps for rest of bill cycle. Actual speed varies by device and location. Mobile Hotspot requires a compatible device. Data usage and tethering that violates contract terms may be slowed or terminated. For more information on Cricket's mobile broadband service, visit cricketwireless.com/legal-info/mobile-broadband-information.html. Mexico and Canada: Includes unlimited calling/texting within Canada & Mexico and between the U.S., Mexico, and Canada. Also includes use of data from your plan while in Mexico & Canada. Canada usage cannot exceed 50%. Data speed, usage & other restrictions apply. Coverage not available everywhere. International data roaming may be reduced to 2G speeds. See cricketwireless.com/legal-info/cricket-international.html for details. Limits: Single line only. Not combinable with other Cricket offers, discounts, credits, or add-on features such as international add-ons, Device Protection, or additional mobile hotspot data. Devices: Sold separately. Pricing, availability, terms, data usage, speed & other restrictions subject to change without notice. By activating/using service, you agree to Cricket Terms of Service (cricketwireless.com/terms). Service good for 30 days. Coverage not available everywhere.
Select a Subscription
Cricket Wireless – unlimited talk/text/data & 15GB mobile hotspot
+$55.00/mo
With Cricket, enjoy unlimited data access with our fastest 4G LTE speeds and 15GB of mobile hotspot. Plan includes Mexico and Canada coverage. Cricket may temporarily slow data speeds if the network is busy. Additional usage, terms & restrictions apply.
What's included
This is an auto-renewed stored value card subscription. A stored value card is what Amazon uses to transmit your monthly service payment to Cricket Wireless. Each month, Amazon automatically charges your preferred payment method to a stored value card, which is then used by Cricket to pay for your wireless service plan. Cancel any time by visiting Your Memberships & Subscriptions. The Cricket Wireless LLC SIM Card Kit and stored value card subscription are offered and sold by Cricket Wireless LLC and the SIM Card Kit is fulfilled by Amazon. See full Cricket Wireless Terms and Conditions.
See more

Important: Your credit card will NOT be charged when you start your free trial or if you cancel during the trial period. If you're happy with Amazon Prime, do nothing. At the end of the free trial, your membership will automatically upgrade to a monthly membership.

Select the color and storage capacity of your new iPhone.

Make your selections for carrier and wireless service (by way of stored value card) and check your local coverage map. You will see 3 items in your cart: the iPhone, SIM kit, and stored value card subscription.

Select from available iPhone payment options. We will then ship your iPhone and SIM kit to you (items may be shipped separately).

Once you receive the iPhone and SIM kit, follow the instructions included in the SIM kit to activate wireless service on your new iPhone. Manage your stored value card subscription that automatically applies monthly towards carrier service in Your Memberships & Subscriptions

Enjoy an automatic credit to your Amazon Gift Card balance

Each month you’re subscribed to your Wireless Carrier Subscription, you’ll automatically receive $4.17 credit on your Amazon Gift Card balance, up to a maximum of $100.00 over 24 months. See Amazon.com Balance and Amazon.com Gift Card Terms and Conditions
Have Questions? Visit our FAQ 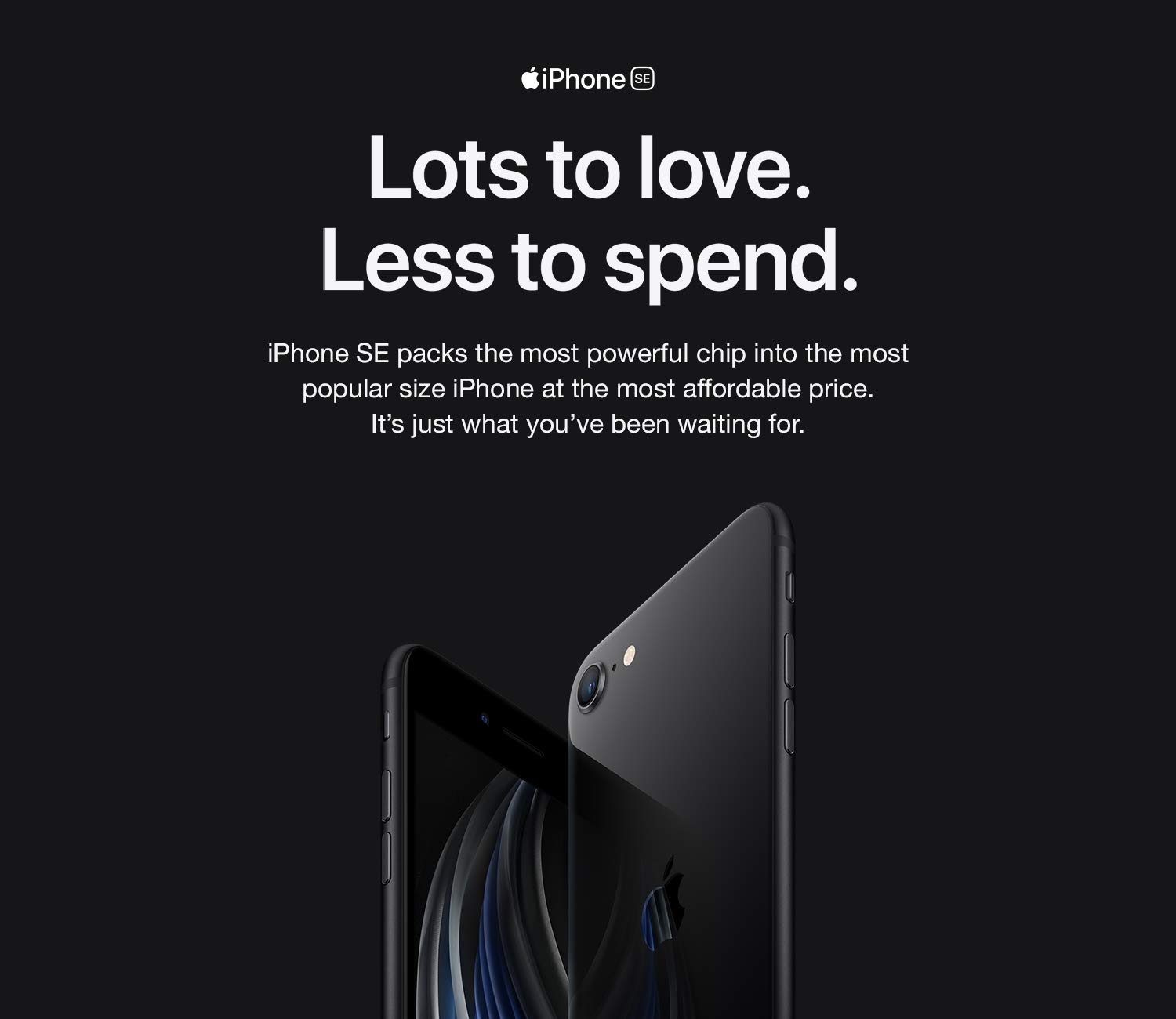 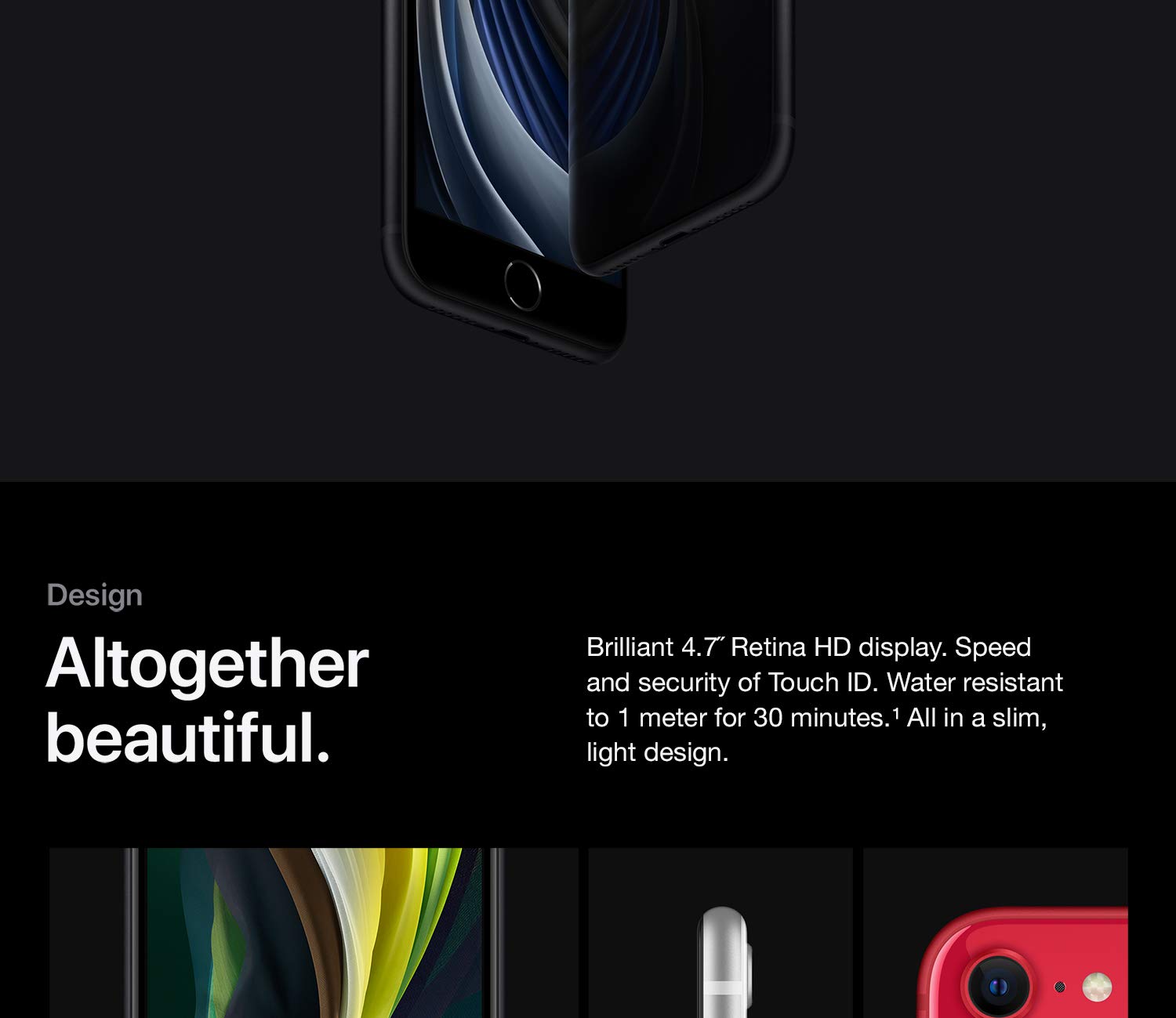 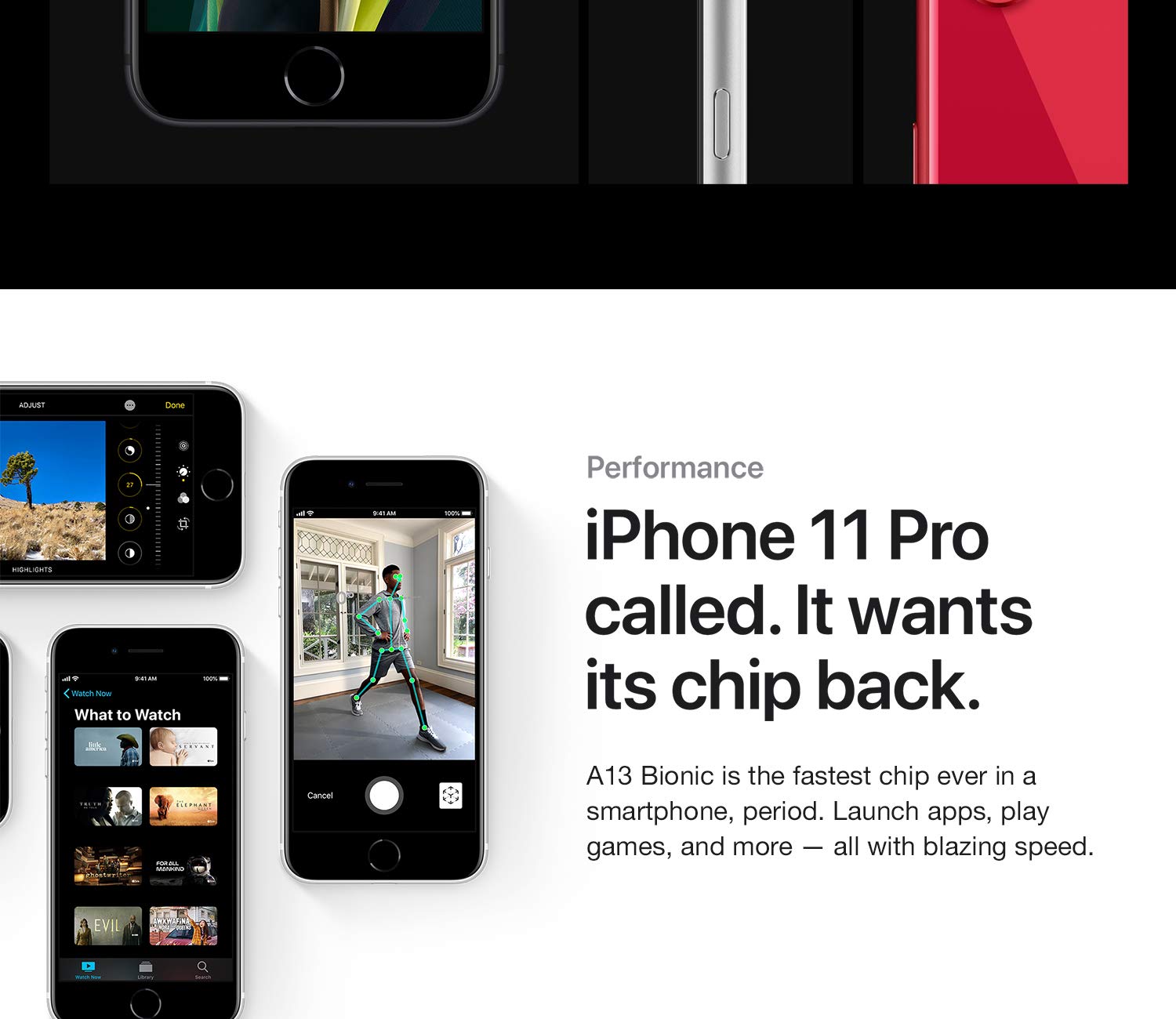 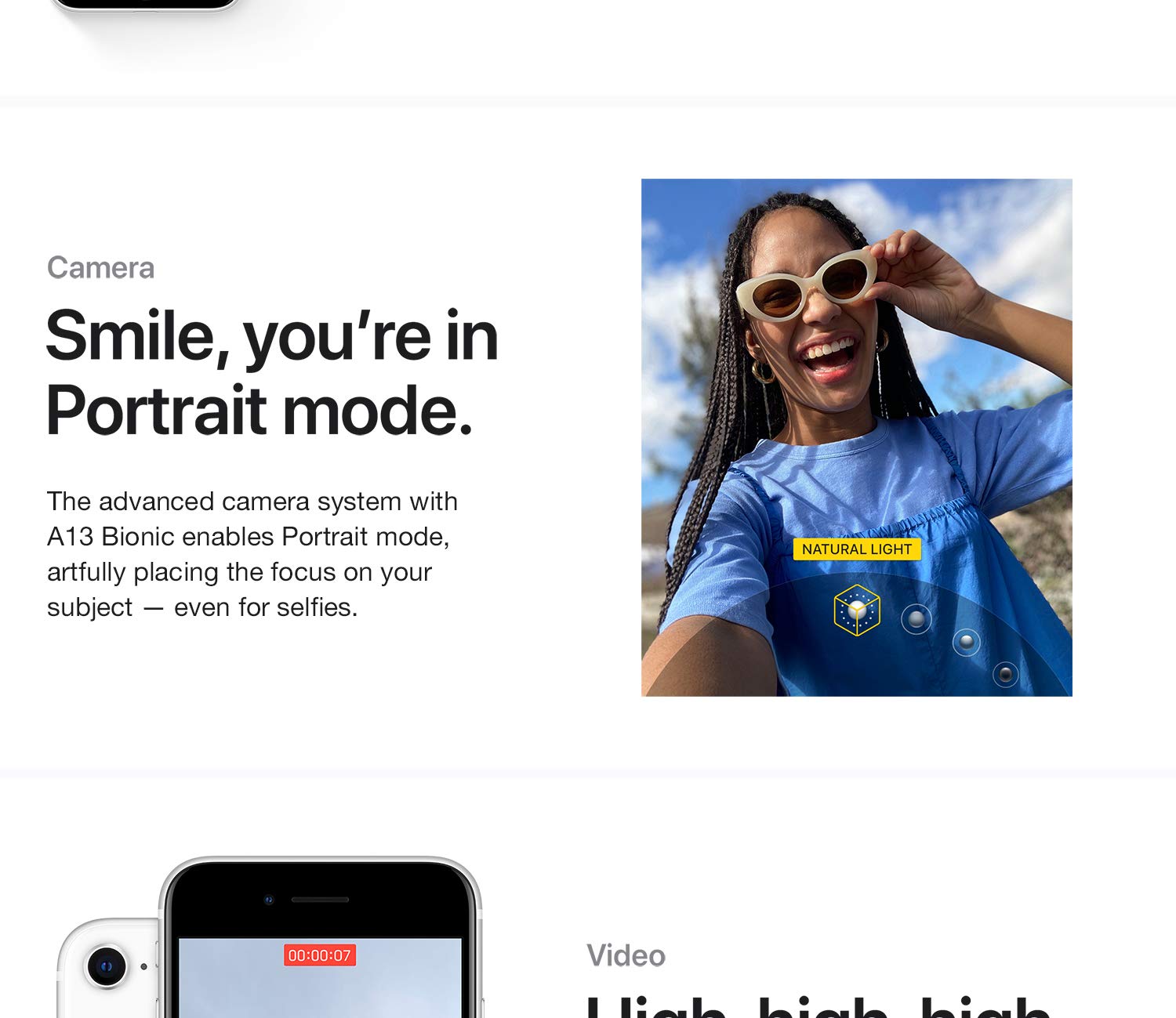 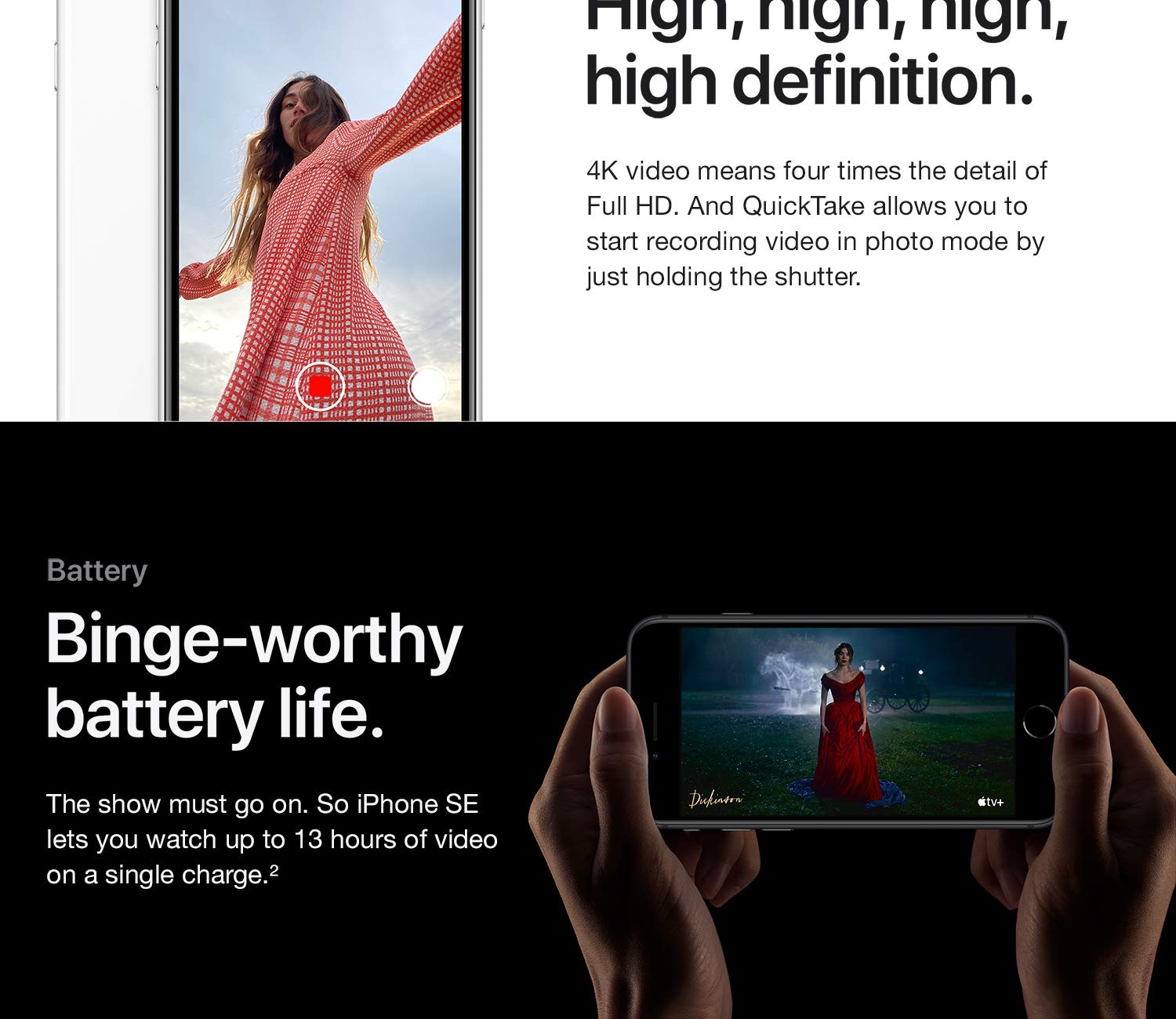 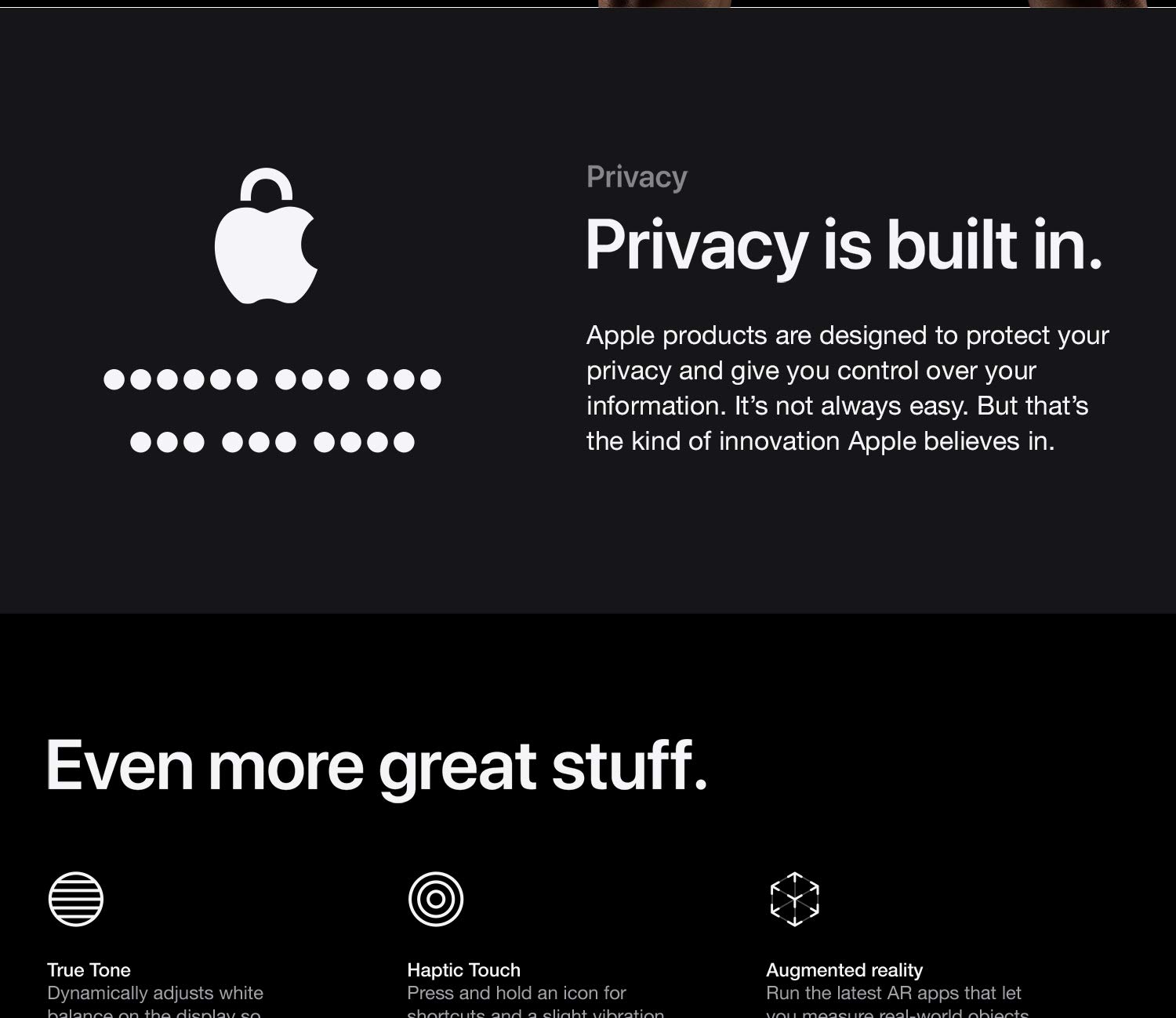 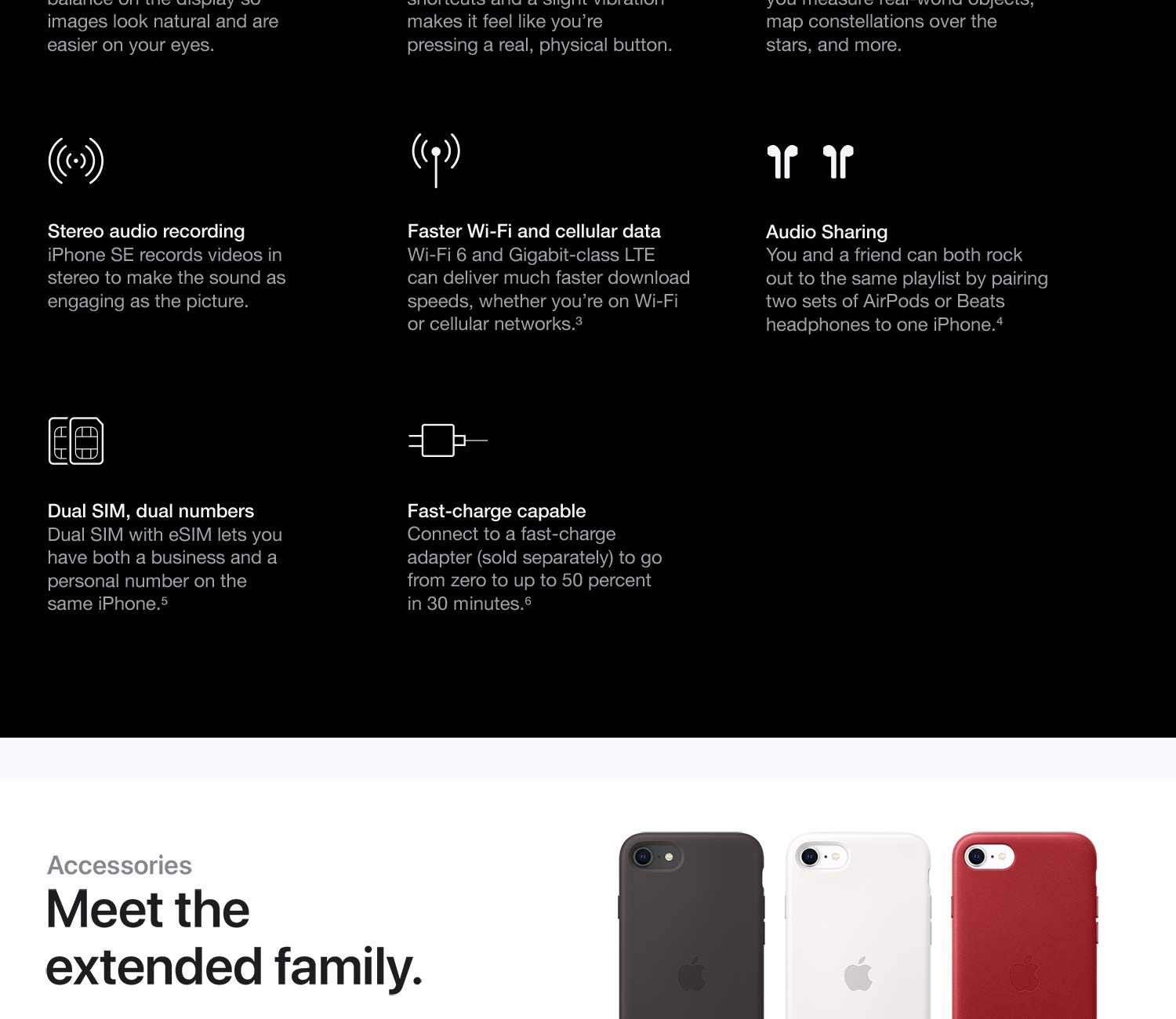 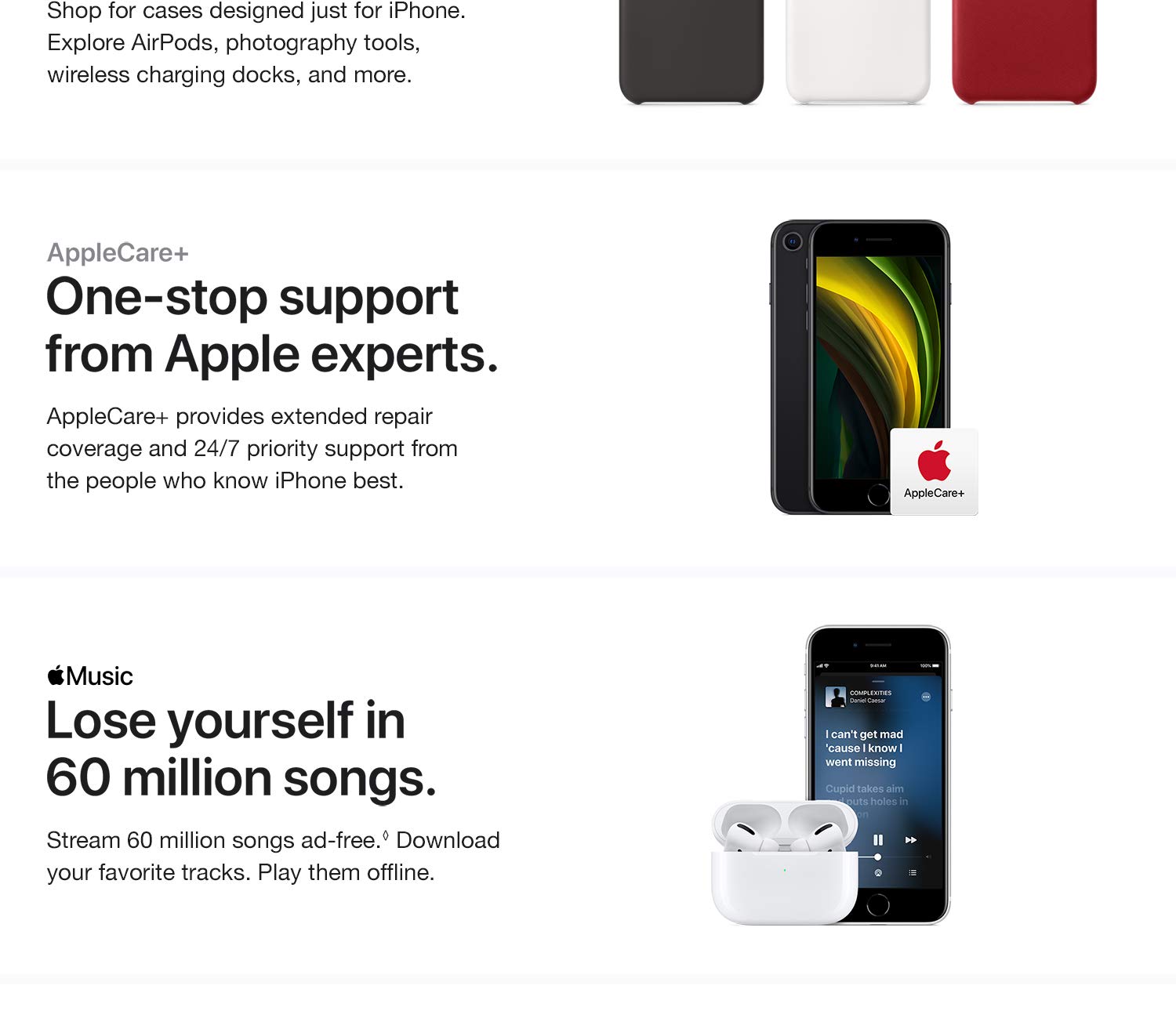 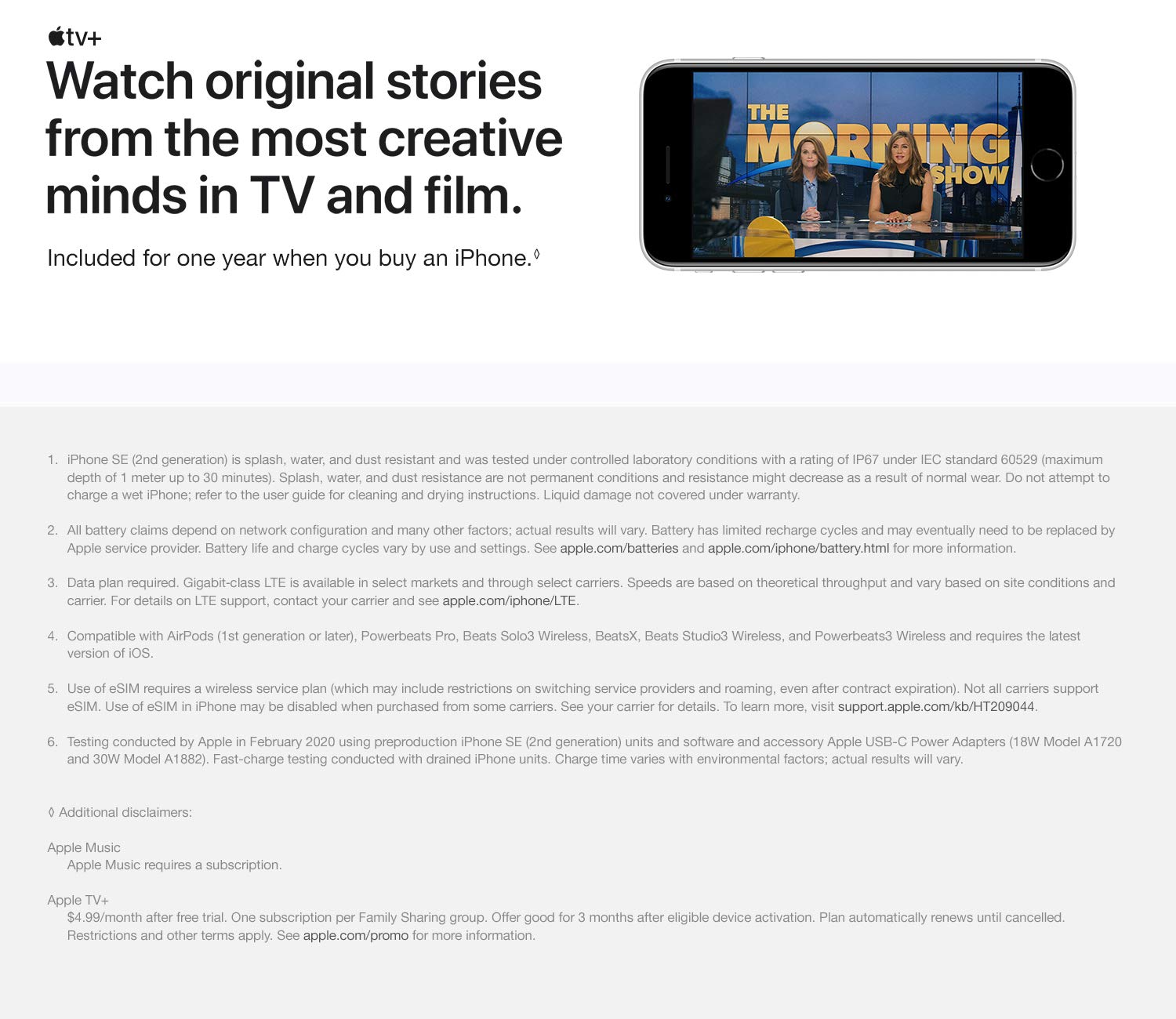 5.0 out of 5 stars
5 out of 5
6 customer ratings
How does Amazon calculate star ratings?
Amazon calculates a product’s star ratings based on a machine learned model instead of a raw data average. The model takes into account factors including the age of a rating, whether the ratings are from verified purchasers, and factors that establish reviewer trustworthiness.
Top Reviews

Angelica Coronado
5.0 out of 5 stars Best iPhone for the price
Reviewed in the United States on June 24, 2020
Color: BlackSize: 64GBVerified Purchase
My iPhone 7 took a crap on me. I was done with sprint. I moved over to cricket and picked up this phone instead. I was a little pissed that it’s more expensive here on amazon than it is on crickets website but I needed the phone ASAP so I guess I can’t complain too hard about that. The quality of the camera is great. Fits iPhone 7 and 8 cases too. Very pleased with my purchase so far.
Read more
One person found this helpful
Helpful
Comment Report abuse

DeeAnna
5.0 out of 5 stars Perfect Product
Reviewed in the United States on May 1, 2020
Color: BlackSize: 64GB
Exactly as I expected
Read more
18 people found this helpful
Helpful
Comment Report abuse

Matthew Speak
5.0 out of 5 stars Excellent Value!
Reviewed in the United States on May 5, 2020
Color: BlackSize: 64GB
Excellent Value!
Look, if you're a power phone buyer who needs the best of every tech available on your platform of choice, stop reading now and just get your iPhone 11 Pro Max and be done with it. However, if you're interested in a budget phone that keeps as many modern features as possible, this is the one for you.

I'll get this part out of the way first. The iPhone SE does not have the newest screen tech available. It's basically the same screen as the iPhone 8—because it really is a suped up iPhone 8. It's not the latest and greatest, but I cannot see a difference between the OLED and LCD screens. Apple's software does a fantastic job making everything look great no matter what their screen is made of. Holding the SE side by side with my iPhone X, and I truly cannot see any marked difference. Nothing that I would miss or even notice it, aside from size maybe.

Yes, the size takes some getting used to. 4.7" from the larger screens available now can be quite a change. If you're using the X, XS, or 11 Pro, you might have an easier time getting used to it than if you're dropping from the Max versions of those phones. And if you like watching movies on your phone, consider a larger phone. But once you get used to the size of this screen, I think you might adjust. Can't say for sure. Personally, I hate watching movies on a phone, no matter what size the screen is. There's no way it can replace my 55" 4K TV.

I'm frankly shocked by how fantastic this camera is. It's better than the one on my wife's iPhone XR, and about the same as the one on my X. In fact, I think some photos are better than my X can take. The only advantage the X has over it, as far as I can see, is loss-less zoom capability. I'm not a huge zoom guy, personally, because I don't think even a dual camera is usually all that great at it, but it's a consideration.

Also missing is the wide-angle lens on the 11 series phones. This could be a drawback for many people, as the photos taken with that wide-angle lens are impressive. However, that is a small trade off for what you're getting in a 400 dollar phone.

This baby has the same insides as its big brothers, which is almost overkill. The A13 chip is a beast and will keep you future-proof for years to come. I'm frankly astonished they included this chip in their budget phone, and it's the single biggest reason this is the best budget phone on the market.

This is probably the second biggest compromise on the phone next to screen size, though it's not a deal-breaker. They kept the same battery as they had in the iPhone 8. However, with the more efficient A13 processor and iOS 13, the battery life is much improved over the 8. You'll get the whole day out of it with normal use, which is fine for me since I charge my phone every night. No, you won't get 11 series battery life, but again...400 bucks.

I have always missed touch ID. It's always dependable and works fast as can be. Plus, with social distancing, you don't have to worry about pulling down your mask in a store, or taking off your sunglasses. Sure, Face ID has its benefits, but I think of this as an even trade. That’s individual preference, admittedly.

The gestures that go with the newer form factors are notably absent, which has taken longer to get used to. I miss scrolling through open apps with the newer gestures, but it's a tradeoff that doesn't break any deals for me. The home button has its benefits too.

Good lord, this phone is fast. Apps open almost instantaneously and run as smooth as butter. It almost feels to me like an old Volkswagen beetle with a Ferrari engine. You won't be let down—this phone can do everything you need it to do.

So far, I'm surprised by how happy I am with this phone as an everyday driver. I've gotten used to the screen size, and I have loved the benefits of a smaller form factor. It's light and simple to use with one hand and I feel less a slave to my phone because it didn't cost me an arm and a leg. I have adjusted to the trade-offs involved with it, and I appreciate the fact that I'm getting a high powered fast as lightning phone, for less than half the price. I give five stars because for what it is, and more importantly what it's trying to be, it's just about perfect.
Read more
65 people found this helpful
Helpful
Comment Report abuse
See all reviews from the United States