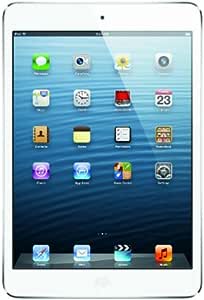 Visit the Apple Store
4.4 out of 5 stars 6,265 ratings
| 1000+ answered questions
Currently unavailable.
We don't know when or if this item will be back in stock.

4.4 out of 5 stars
4.4 out of 5
6,265 global ratings
How are ratings calculated?
To calculate the overall star rating and percentage breakdown by star, we don’t use a simple average. Instead, our system considers things like how recent a review is and if the reviewer bought the item on Amazon. It also analyzes reviews to verify trustworthiness.

Reader44
4.0 out of 5 stars 3rd party seller scams. Your NEW Amazon iPad might be USED. Here's how to tell.
Reviewed in the United States on April 12, 2013
Verified Purchase
The product itself is fantastic and my stars are based on the product being a great deal and a great device.

But for anyone thinking of buying from Amazon, be warned. I purchased one of these for someone on her birthday and it was listed as new. Amazon seems to only sell iPad minis from third party sellers, not from Amazon.com itself, meaning another company gets the iPads from any source they want, sends them to Amazon, and Amazon ships them. One of these sellers listed an iPad mini slightly above retail price, but cheaper than all of the other iPad minis on Amazon. In fact, when I searched for iPad mini, it was the seller and product page the site automatically directed me to. The page indicated it as new, and sold it to me via Amazon. When my friend got her iPad mini, it looked new, was packaged and sealed like new, but when she turned it on, it was tied to someone else's icloud account. I called apple and gave them the serial number. Sure enough, the item was used, only had about 60 days left in the warranty (instead of 90) and was registered through Apple to a different customer. If I wanted a used iPad Mini, I would have paid less. Much less.

I even emailed the user who had previously owned it (since her email address via iCloud was showing up when my friend tried to access the app store. I emailed the previous user just to make sure it wasn't a stolen product. She explained that she had purchased it a few weeks back from At&T, not from Amazon. She wanted a wifi + 3g version, not just wifi, so she returned it and somehow, the third party seller got their hands on it and sold it to me as new.

In the defense of of the third party seller, once I got their phone number from Amazon and called them (most seller numbers are not on Amazon, you have to call and request a phone number), they provided a scary explanation: They explained that there are problems with Amazon's FBA system (fulfillment). Sometimes, iPads are returned with nothing but index cards in the box and Amazon thinks there is an iPad inside. Sometimes, products mingle, and so another seller's used iPads might be with a different seller's new iPads. They explained that they have a very legitimate source of iPads and have been selling iPads for years and that this is a rare occurrence, although it has happened before. I have no way of verifying any of this, so I can't blame Amazon or the seller. All I can say is that for such a large purchase, and one that is a gift, you are better off buying from a major retail store that doesn't sell used items at all (or buying from Amazon when it is shipped and sold and fulfilled by Amazon). Right now, this product is actually on sale at Walmart.

Amazon refunded me but now my friend has to return her birthday gift. I recommend buying from someone other than Amazon. For this particular product, it's probably the cheaper route to do that anyway. If you do buy from Amazon, call Apple with your Serial Number and verify it is a new, unregistered product with a full 90 day warranty. Don't get scammed.

Nicole Brewer
1.0 out of 5 stars You will get an iPad but the quality and safety of that iPad is unknown
Reviewed in the United States on July 22, 2016
Verified Purchase
I bought this for myself March 2016. Went on vacation July 2016 and all was well then while I was on iPad it turned off and will not come back. I didn't spend this kind of money for it to work for 4 months. I ended up taking this iPad to a phone surgeon store, paid $30 for them to look into it and see it can be fixed, which it cannot, this is what was found (see picture below)
They plan to write a review of their findings, I will post when I receive. Digitizer was out on iPad. LCD connector had been shorting for some time and was melting the inside, as well as around the inner sides. You can see this in the photo. The man from the phone surgeon store also expressed it was his opinion that this would have been known prior to them "refurbishing" it and that I got ripped off. I know I took a chance on purchasing a refurbished iPad but I feel as if I put my trust into the wrong place and I am posting this so maybe I can help others not make the same mistake. I sometimes expect people to do the right thing and not be greedy, therefore placing my trust where it is not belonged, this definitely being one of those times.
Read more

Karen E. Lane
4.0 out of 5 stars i like it but . . .
Reviewed in the United States on May 28, 2013
Verified Purchase
through the years i have owned various iPods. this is my first Apple product with computer like elements. i live in the mountains where my 3G smart phone has issues with coverage (a 1 foot area in my house that allows me an ok phone call) and wasnt sure if the 4G and wifi on the iPad would work any better, it doesnt work better in fact it is worse. i try to face time with my grandson and it stops and restarts constantly. right now i'm chalking it up to my inexperience with Apple and will caontact Apple and Verizon for help! immediately. (i even tried it outside the area and had even worse luck)
if you are a city person, with towers all around you- go for it!! the screen is amazingly clear. if you're a mountain person and want to use it for internet access, maps etc. - really think about it!
Read more
Helpful
Report abuse

Misti Morgan
3.0 out of 5 stars Super slow!
Reviewed in the United States on September 28, 2016
Verified Purchase
I purchased this for school for my middle schooler. It arrived on time and it's pretty good condition but the screen had a darkened streak on the bottom of the screen. Not a big deal it's refurbished but after turning it on I realized it is extremely slow. Like so slow it takes 5-10 seconds after typing something for it to show up. And that was with absolutely nothing but factory apps on it. It was so slow to do anything that it was pretty much unusable. I purchased the black version for one of my other kids at the same time and even though it says they are pretty much the same the black one was so much better! I was able to return for a full refund without any issues so that's the reason for the 3 stars. If you're not worried about speed then it's a nice little tablet but if you need one that works decently then go with a different one. It's possible that I just got a bad one but from what I've heard from other people it's hit or is with this version of the iPad mini.
Read more
7 people found this helpful
Helpful
Report abuse
See all reviews

BRENNY
5.0 out of 5 stars Five Stars
Reviewed in the United Kingdom on February 8, 2015
Verified Purchase
I love my ipad and use it loads.
Read more
Report abuse

Cara
5.0 out of 5 stars perfect touchscreen
Reviewed in Canada on January 7, 2015
Verified Purchase
awesome! I really love it, and it's the perfect size, even my mom who sometimes has a hard time seeing says she can see almost every thing on it. some internet text is small but that's easy to adjust. easy to use and understand.
Read more
7 people found this helpful
Report abuse