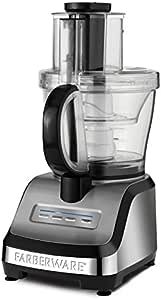 by Applica
3.2 out of 5 stars 16 ratings
Currently unavailable.
We don't know when or if this item will be back in stock.

Complete all your kitchen prep work without a fuss with the Farberware FP3000FBS 12 Cup Food Processor. With its 12-cup work bowl teamed up with the 4-cup nested work bowl you can slice, dice, chop, or shred through any amount quickly. 550 watts of power behind three speed settings allow versatility and ease though even the toughest of tasks. Quick clean up comes with its dishwasher safe parts, along with cord storage and parts storage in the workbowl. Security locking lid Skid-resistant feet Dimensions - 11.61L x 7.00W x 8.25H Included accessories - Dough blade, nested work bowl, shredding disc

3.2 out of 5 stars
3.2 out of 5
16 customer ratings
How does Amazon calculate star ratings?
Amazon calculates a product’s star ratings based on a machine learned model instead of a raw data average. The model takes into account factors including the age of a rating, whether the ratings are from verified purchasers, and factors that establish reviewer trustworthiness.
Top Reviews

Hannah
1.0 out of 5 stars Unsafe and broke by day 3
Reviewed in the United States on January 8, 2016
I received this food processor, which was purchased by my brother from Amazon, as a Christmas gift. I read the instruction manual completely, and for about a day I was very impressed with it. On the second day, I tried to make smoothies, and the frozen berries and ice kept causing the blade to lift off of the shaft so that it would stop turning. I checked and re-checked the manual to make sure that the blade had been set up correctly, and this seems to be a design flaw. On the third day, I tried to use it to grate cheese. Again, I reviewed the manual including the specific grating tips included, and followed the instructions exactly. When I added the cheese using the grating blade and having set the machine to the proper setting, the machine made a terrible exploding sound, the shredding disc flew off of the shaft, the lid, which had been securely locked into place, became broken in several pieces by the loosed and still-spinning blade, and the plastic of the lid was broken. Bits of plastic ended up in the cheese that had been grated, rendering it useless, and the un-grated cheese, along with other pieces of the lid, were scattered over the counter. The locking mechanism no longer works due to the breaking of the lid, but I wouldn't use it again anyway, because this was clearly a safety hazard, and had I not backed away quickly I could have been injured by flying plastic or the spinning disc.
Read more
4 people found this helpful
Helpful
Comment Report abuse

Nancy Castaldo
3.0 out of 5 stars Works great but LOUD! UPDATE
Reviewed in the United States on January 7, 2013
I can not believe how loud this processor is. I really feel like I need to wear head phones with it. HOWEVER, it does work and it works well. I've used it to make smoothies and I love that it has a small bowl as well as a large one. I've also used it to slice and shred cheese. I've been using it for about a month now at an average of 2-3x's a week. But it is LOUD! That's why I gave it 3 stars. So, for the price, it's a great deal!

UPDATE - I couldn't take how loud it was, so I returned it and got an Oster which is sooo much quieter and works just as well!

hershey
2.0 out of 5 stars not good
Reviewed in the United States on March 22, 2014
Every time I try to grate cheese the lid flies off! I lock it into place, and it flies off! I tried holding the lid down with one hand while running it, and it STILL flew off and I almost grated my hand! Tried different sizes of cheese, but that didn't help. Will be returning and finding a better one.
Read more
One person found this helpful
Helpful
Comment Report abuse

baby_blueyes
2.0 out of 5 stars NOT HAPPY
Reviewed in the United States on August 13, 2013
I have owned food processors for more then 20 + years . After going a year (old one died ) without one I purchased a Farberware model # FP3000FBS from Walmart. When I finally used it to shred cheese the interlocking lid flew off and hit my grandson. He is ok. I thought maybe I put lid on wrong . NOPE !!! I tried 2 more times each time cutting cheese into smaller pieces. All 3 times the so called interlocking lid came off. I am grateful the shredding blade didn't fly out. I did discover the lid clicks as to lock but doesn't stay locked. I love Farberware products just this isn't one . They will be replacing it with a Black & Decker food processor / blender combo as they claim to have no more FP3000FBS in stock. From what I have read this combo has a lot of issues with it. Once I get the new combo machine I will update how well It works.
Read more
4 people found this helpful
Helpful
Comment Report abuse

nflfan25
1.0 out of 5 stars Died after one use
Reviewed in the United States on June 12, 2012
I purchased this in April, 2012 and used it once with no problem. The next time I went to use it (2 months later) I plugged it in and none of the lights came on to indicate it had power. I contacted the customer service # provided on the website and was told to send a description of the problem, reference the transaction #, along with my contact information, and to cut the plug off of my defective unit and mail it to the address they provided. Having done that, I am now awaiting a Black and Decker FP2500, since I was told they have no Farberware repalcements in stock.
Read more
4 people found this helpful
Helpful
Comment Report abuse

Rachel
5.0 out of 5 stars Great for the price!
Reviewed in the United States on May 21, 2013
I have had this food processor for 6 months now and use it multiple times each month. It works great and I have definitely more than gotten my money out of it! The 12 cup bowl holds so much so I can keep adding food to it until the job is done. I don't believe this machine would break unless you were purposely abusing it. I look forward to using it for the next few years!
Read more
6 people found this helpful
Helpful
Comment Report abuse

Marcia
4.0 out of 5 stars Four Stars
Reviewed in the United States on December 12, 2012
Verified Purchase
as described
Read more
Helpful
Comment Report abuse
See all reviews from the United States