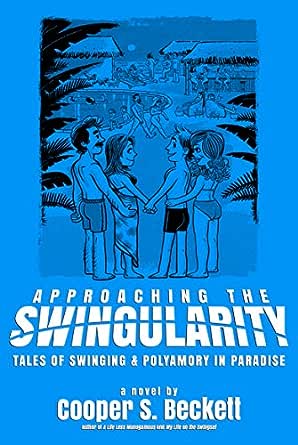 You've subscribed to Books of The Swingularity! We will preorder your items within 24 hours of when they become available. When new books are released, we'll charge your default payment method for the lowest price available during the pre-order period.
Update your device or payment method, cancel individual pre-orders or your subscription at
Your Memberships & Subscriptions
There was an error. We were unable to process your subscription due to an error. Please refresh and try again. 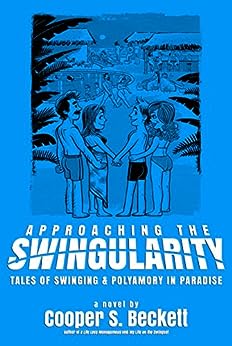 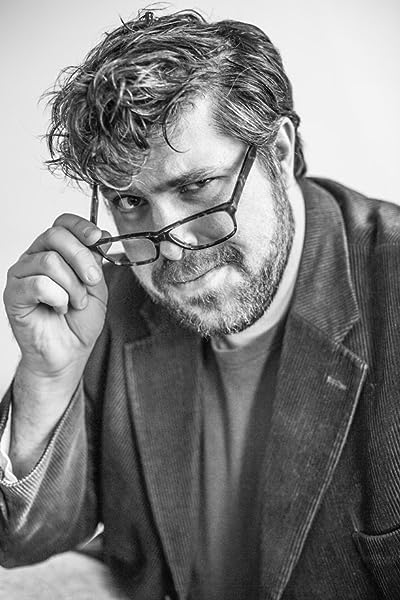 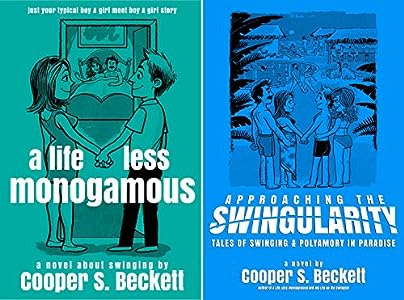 5.0 out of 5 stars
5 out of 5
24 customer ratings
How does Amazon calculate star ratings?
Amazon calculates a product’s star ratings based on a machine learned model instead of a raw data average. The model takes into account factors including the age of a rating, whether the ratings are from verified purchasers, and factors that establish reviewer trustworthiness.
Top Reviews

TheRevDr.
5.0 out of 5 stars A Reflective but Joyous Visit to Paradise for Perverts
Reviewed in the United States on July 13, 2017
Verified Purchase
I was a bit apprehensive reading this book, similar to the feeling you get when a friend asks you to read their screenplay. I've shared post-election cocktails/hangovers with Cooper and MsRevDr. and I have been two-time (soon to be three) campers at the Swingset takeover of Desire. So while Cooper and I are not besties or anything, I really didn't want it to suck. That kind of anxiety can make you hypersensitive to flaws, which can become a self-fulfilling prophecy, etc. You get the idea.

It turns out, from almost every perspective, my concerns were unfounded. Cooper can write. This was initially a relief and, eventually, a source of inspiration. His narrative keeps you engaged, the characters (for the most part) are well-written, and you end up caring about their development. The dialogue is better than that contained in many NYT bestsellers. Not as high a bar as you might think, but impressive nonetheless. I did end up wondering if there was enough description for people who hadn't been to Desire (the Mexican resort upon which the practically pseudonymous "Aphrodite's" is based), but having been there twice I'm in no position to judge.

The sex scenes were hot, though perhaps a little too much so. Not every swinging experience is an A+, and the book might be accused of making the sexual part of swinging look entirely un-fraught. Even at Desire, there can be experiences which aren't terrible, but which can stir up feelings of insecurity, jealousy, and existential angst. Or just aren't particularly hot because you didn't connect like you'd hoped. For example, I can't remember a character who *really* wanted to get with another character and was turned down in such a way as to knock the first character back on her or his heels. Everyone seemed exceptionally self-actualised when it comes to rejection, lack-of-four-way-matches, and hot-with-not syndrome. It may be that Cooper has reached that stage in his own swinging development, but that's by no means universal (at least not at my house).

However, the book is superb when it focuses on the relationship issues that both surround and are directly involved in swinging. So, too, with the personal emotional issues that can derail the nonmonogamous adventure. "Approaching the Swingularity" bravely deals with issues of sexuality, depression, ageism, heteronormative privilege, slut-shaming, body-shame, etc., exposing how fiction can sometimes be more effective in exposing internal issues than non-fiction that is ostensibly *about* those issues (no book *about* swinging can prepare you for the feeling of being the "not" in an otherwise 4-way match). Top marks, therefore, for perspicacity regarding how swinging and polyamory are not always an emotional walk in the park.

My quibbles with the book are minor and probably belong purely to me. Even though there is some tragedy in the book (no spoilers!), everything seems resolved in the end of the book in a "unicorns and ice-cream"-ish kind of way. I always leave Desire with a few regrets and missed opportunities to accompany the memories I'll cherish forever. There's also an unexamined privelege that attends being able to go to a place like Desire. MrsRevDr. and I are lucky enough to be able to afford the trip most years but the current minimum rate is $3,000/week + airfare. So while there's a self-selection mechanism involved in going on this trip from a socioeconomic perspective, that undoubetdly expresses itself to some degree in racial, class, and other sorts of privilege. There are a lot of faces you just don't see at "Aphrodite's" and, in spite of Cooper's attempts to make the trip and the book friendly to all sorts of relationships and sexualities, there's a hard limit for people who can't afford it, no matter how much they potentially might love it. This book might have been a good place to reflect on that reality, though, to be fair, it's Cooper's book he gets to decide what goes into it. When I write my book on ethical non-monogamy...

In sum, even if you are a non-Swingsetter, non-nonmonogamous/vanilla, but are either curious about how it (mostly) actually works at Desire or just looking for some hot sex scenes, this book is well worth your time. I'd even suggest it for people who just want to understand what is going on in the heads of the non-monogamous and the varieties of experiences we seek. It paints an overall rosy picture, it's true, but there's a reason why we all pay that money to go back year after year. It's a pretty f*cking rosy time. Cooper has done an exceptional job capturing it in all its complexity.

EtherealClarity
5.0 out of 5 stars This sexy, inclusive book about non-monogamy hit it out of the park!
Reviewed in the United States on June 26, 2017
Verified Purchase
There aren't a whole lot of good fiction books out there about consensual non-monogamy, but this one (and its predecessor, A Life Less Monogamous) hit it out of the park. The setting is exciting and fun, the relationships between the characters feel authentic and genuine, and the sex is genuinely sexy while still feeling realistic about the ways in which minds and bodies can sometimes get in the way. I also loved how the entire book felt casually inclusive of so many different kinds of people, with myriad body types, sexualities, genders, and races all weaving themselves in and out of the story. I could relate to some of the polyamourous bits of the story, which also felt very realistic. I'm not a swinger, but I really enjoyed experiencing and appreciating this world through the eyes of people who genuinely love being there.
Read more
Helpful
Comment Report abuse

JW
5.0 out of 5 stars I less than 3 U
Reviewed in the United States on June 27, 2017
Verified Purchase
As newbies to the scene over the past two years I'd have to say that Beckett has opened our eyes and thoughts to a whole new realm of thinking and living and ultimately loving....book was transformative in a sense of witnessing story, character development and of course the reality of the swinging lifestyle. His writing on sex blows anything away currently out there in the genre in my opinion.... I was excited to hear that this is possibly a second book of a trilogy. End result after finishing the book is that a resort trip is definitely happening in the near future when we can find the funds and the time. Not a matter of if, only when. Thanks cooper!
Read more
Helpful
Comment Report abuse

Matthew Rice
5.0 out of 5 stars Wonderful
Reviewed in the United States on May 16, 2017
Verified Purchase
Just finished the second story of your swingers series and I must say you made me homesick for somewhere I've never been and something I'll probably never have the pleasure of experiencing. You can just tell that the tale was a collection of real experiences and people you've had the good fortune of being with. It's a unique experience for me to be filled with such happiness, envy and grief at the same time. Thank you for writing it.
Read more
One person found this helpful
Helpful
Comment Report abuse

Steven Lind
5.0 out of 5 stars Transcendental
Reviewed in the United States on June 14, 2017
Verified Purchase
A week in paradise is never enough. It beckons us back again and again. Cooper describes a week in such a place. We feel the struggles of the characters as they move through the week toward resolution in dealing with their lives.

We probably all have such places even if it's not on a Mexican beach. I know my own Room of Love that is capable of transforming one's life while making meaningful connections. We all never want to leave but at some point we must, yearning to return before we've reached our default lives.
Read more
Helpful
Comment Report abuse
See all reviews from the United States