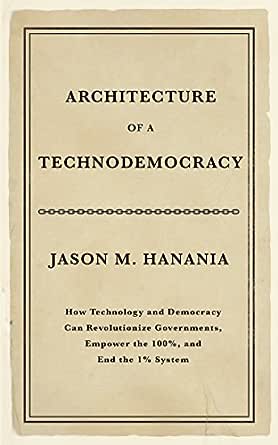 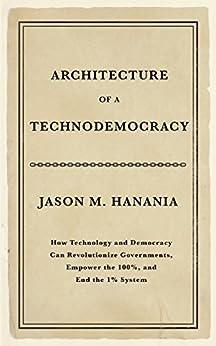 Architecture of a Technodemocracy: How Technology and Democracy Can Revolutionize Governments, Empower the 100%, and End the 1% System Kindle Edition

Jason M. Hanania is an attorney, an engineer, and a former U.S. government employee. He ran for the U.S. Senate in 2016 as the first technodemocratic candidate. --This text refers to an out of print or unavailable edition of this title.

4.6 out of 5 stars
4.6 out of 5
101 global ratings
How are ratings calculated?
To calculate the overall star rating and percentage breakdown by star, we don’t use a simple average. Instead, our system considers things like how recent a review is and if the reviewer bought the item on Amazon. It also analyzes reviews to verify trustworthiness.

David W Dove
3.0 out of 5 stars Too Utopian in Nature
Reviewed in the United States on October 13, 2018
Verified Purchase
While the book did a good job of pointing out many of the failings in the current system, I found the author was a little too enamored of his proposed system. He failed to really examine any potential shortcomings of his "technodemocracy" and just kept talking about what benefits it could bring about. Any time a person talks about a subject in such a manner, I automatically become skeptical. That's not to say he didn't have some intriguing ideas, just that I'm not ready to jump on the band wagon yet. I would be interested in seeing some of his ideas tried at a local level, in a few different places, to see how they worked. One thing he never talked about is how this system would guard against the excesses of democracy and protect the individual from the majority.
Read more
40 people found this helpful
Helpful
Comment Report abuse

maq224
4.0 out of 5 stars A Technodemocratic Republic is within our reach!
Reviewed in the United States on May 17, 2018
Verified Purchase
Jason M. Hanania’s “Architecture of a Technodemocracy” is not just a how-to for a future Technodemocratic world, it is also an in-depth look at the illusions and realities about democracy in America. We don’t live in a democracy, we live in a nondemocratic republic! A small detail to some, but Hanania digs deep into US history and explains exactly what the founding fathers were creating when they declared independence from England and formed the United States. He examines the US Constitution, especially the Bill of Rights, explaining the irregularities in language and structure and how they have centralized governmental power in the 1%. While this system may have been adequate in 1787, it requires some improvements for the current size and scope of America.

After a lengthy look at the history of American government, Hanania sets forth the legal, technical, and social requirements for a Technodemocracy in America. I thought the technical section would be over my head, but he does a good job of explaining the jargon and history of the technical requirements, namely a user platform (starting with an e-voting service) and block chain security (to protect it from government and corporate influence).

I found the most interesting parts of this book to be when he actually gets down to the logistics of making a Technodemocratic republic a reality. Jason M. Hanania has a clear understanding of how this new world can be built, and the ability to persuade others to contribute to it.
Read more
18 people found this helpful
Helpful
Comment Report abuse

Rock
5.0 out of 5 stars to concerning to disgusting to frightening
Reviewed in the United States on May 22, 2018
Verified Purchase
Two words...HOLY. COW! This book was everything from informative, to enlightening, to concerning to disgusting to frightening! If you are looking to have your eyes opened to the true state of political corruption along with the misguided masses who inadvertently support the people who are against them, then this is the book for you!

This book does an incredible job of showing how technology and persuasive power can entice an entire society to act against itself. It essentially allows those with the most wealth, power and influence to dictate the terms of life for the rest of us. It also outlines how that same technology and wisdom can be placed back into the hands of society to bring about effective change, without violence, without bloodshed and by acting with ethics and courage instead of only an interest for only the wealthy.

The historical background provided along with the ease in which the author makes it relevant in today’s world is profound. You finish the book with a true understanding of where we’ve been, where we are and where we could go if act. While it is a plausible future for American society down the road, it also gives you some insight on our political background while exposing just how helpless we’ve become as a society despite the fact we have the power to enact change. Easy 5 starts for this book!
Read more
20 people found this helpful
Helpful
Comment Report abuse

KateyNicola
5.0 out of 5 stars The next big thing?
Reviewed in the United States on May 31, 2018
Verified Purchase
Hanania ran as technodemocrat in last election, didn't get elected, but did raise a lot of questions and saw the need to answer them so he wrote this book. I'm glad he chose to provide this information rather than scoff at people's ignorance and walk away. He is spot on, our country is primed for change and this is the option he thinks is best. This book gives an extensive look at a political system tailored to today's needs.

It uses technology to try and forge a utopian society. It seems to make everyone's voice heard, as used to occur in town meetings but became near impossible on a large scale, or so the argument was. His system has many attractive principles, like no political parties, true tax reduction, and no campaign donations. It is intended to use a high security blockchain program, which is how Bitcoin functions, and is supposed to give part to all participants rather than be monopolized by a small percentage.

Hanania begins by stating his premise and prepared points before diving in, I like organized authors who take the time to outline and form complete arguments. Many compelling ideas are revealed, like the comparison of the right to bear arms with net neutrality. This book is well worth the read, it's info packed and provides nearly every answer to any question you might have regarding this new political thought movement. Even if you don't agree with every point, the education is a necessary one.
Read more
6 people found this helpful
Helpful
Comment Report abuse
See all reviews

Peter Monien
5.0 out of 5 stars Great book about a potential future for our democracy
Reviewed in Germany on October 7, 2019
Verified Purchase
An interesting vision to replace the corrupt electoral and democratic system with a new direct democratic alternative. Comes with a concrete description of how this system would work.

Power to the people:

"The Evoting Service would provide 100% of the American people the perpetual ability to collectively act in the following ways: • Create new laws • Amend existing laws • Deploy the military • Investigate, or check, any aspect of government • Appoint government positions, such as judges • Construct infrastructure • Take any other action the legislative branch has the constitutional power to take • Make administrative changes to the User Platform"
Read more
Report abuse
See all reviews