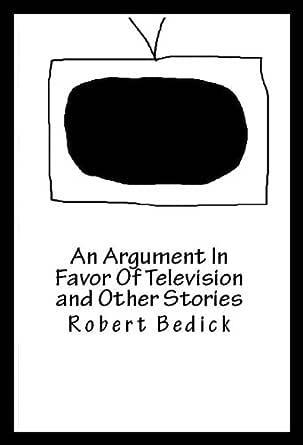 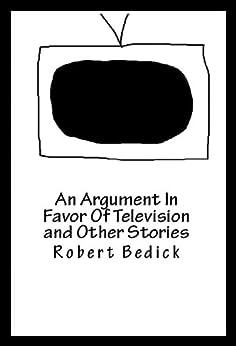 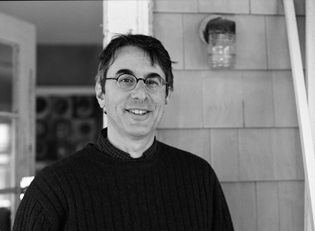 An Argument in Favor of Television and Other Stories Kindle Edition

This is part of an introduction that I originally considered including in the book, but then later changed my mind. Now I'm thinking that maybe it's O.K. to include it here.

Should there even be an introduction; shouldn't these stories speak for themselves without an editorial intervention on the author's part?

Ideally, the answer is yes. An answer that you, the reader, can enforce, by simply skipping the next few pages and turning the channel (so to speak) to the one that contains the stories themselves.

On the other hand, who is immune from wanting to find out about the writer behind the fiction; to be able to say, oh yeah, that character on page 7 was his first wife, the one he cheated on with the woman who sells pots in the story about the one-legged Holocaust survivor (his maternal grandfather in real life)? The desire to tease out the autobiographical from fiction has probably existed since Homer was reciting poetry to his faithful scribe. ("Weren't those greaves that Achilles wears similar to something a lover of Homer's once gave him on his birthday?")

I'm not about to provide a map between my life and the "fiction" in these stories - I'll let someone who is willing to devote his life to going through my trash to come up with that book (if it could possibly interest anyone). What I will provide, however, is a hair's worth of information about the stories themselves - just a hair's worth.

These stores were written in three major groups. The oldest stories are The Loneliest Monk, A Second Chance, One Dead Grandfather, and An Argument in Favor of Television.

The middle group of stories includes: The Receptionist and Daughters.

The most recent stories are The Eden Project, Limousines and Violins, and Microwave, A Love Story (On Twitter). I'll leave it to you, the reader, to say whether I've gotten better or worse over time. --This text refers to the paperback edition.

N. Norman
4.0 out of 5 stars Highly recommend these stories.
Reviewed in the United States on December 12, 2013
Verified Purchase
Contemporary stories that go down easy...wittily written, with unexpected twists and turns. The engaging title story,"An argument in favor of television," is essentially about a writer musing about the art or writing -- a form oft-tried, but rarely successful. Bedick's story proves to be the exception, as he explores the meanderings of a writer's mind. His other stories delight as well -- I particularly enjoyed "Daughters" and "A Second Chance." Bedick is a writer to watch - combining sly surrealism with the everyday vicissitudes of modern life. Think Cheever crossed with Donald Barthelme. I highly recommend these stories.
Read more
One person found this helpful
Helpful
Comment Report abuse

Retired Reader
4.0 out of 5 stars Good Reading
Reviewed in the United States on July 8, 2013
Verified Purchase
In the 1950's many English teachers were conscientious advocates for the art of short story writing. Whether this is still the case is debatable. Certainly the short story appears to have gone the way of the magazines that were the primary consumers of short stories. Yet there are still authors out there trying to turn out short stories. Which brings us to this book by Robert Bedick.

It is a 21st Century collection of short stories and very good stories they are. This collection makes one realize that short stories can still be very compelling reading for any reader of fiction. There are two stories in this collection that particularly resonated with this this reviewer: "The Receptionist" and "Limousines and Violins." Both these stories demonstrate Bedick's ear for realistic dialog and his ability to describe complex, but very human issues with a few deft sentences. In short this book demonstrates that not only is the art of short story writing not lost, but that it continues to be the source of some very fine literature.

Grady HarpTop Contributor: Children's Books
HALL OF FAMETOP 50 REVIEWER
5.0 out of 5 stars Robert Bedick continues to rise above the ordinary
Reviewed in the United States on June 30, 2013
Back in 2010 this reviewer wrote the following in reference to Bedick's first novel: `Robert Bedick is a writer of substance. Though TOMAS may be his first published book, this first novel bears all of the traits of a practiced and gifted writer. He knows how to create characters about whom we care.' Now Bedick offers us that major challenge for writers - a collection of short stories that require terse condensation of an idea worthy of relating but without the luxury of space to expand any particular thought. He continues to be a writer of substance!

The characters Bedick creates seem at first to be marginalized personalities, but as he weaves his tales, he brings these isolated creatures into such sharp focus that we declare we have known them or encountered them on our own. Make that happen in the form of a short story and a writer proves his gift. He cleverly includes a story reflecting current our obsession with social media - `Microwave, A Love Story (On Twitter) presented in the original format of each page being a visual copy of that day's Twitter entry - `an obsession with microwaves can lead to only one thing - love.'

But if that suggests a gimmick to make the book controversial, then read on to `A Second Chance' - a fascinating encounter between a woman who believes she knows the man she spies and had an infatuation (read stalking) obsession with the man who informs her she has a mistaken identity problem. Or the title story of the book that details a writer conflicted with story and autobiography and the asides to the reader help us appreciate the struggles in writing that author's face. Or the blurred line between expectations and realities in `Daughters' or the very tender elegy in `One Dead Grandfather' where a teenager struggles with the fact that he was not present as his grandfather died.

Bedick creates real people in unreal circumstances and at times his characters are so palpably drawn that we feel them inside our heads. That is how fine a writer Robert Bedick is and continues to grow. Few writers today can master the art of short story writing with this degree of skill and variation of themes. He knows his craft and uses it well. Grady Harp, June 13

David KeymerTop Contributor: Rock Music
TOP 500 REVIEWERVINE VOICE
4.0 out of 5 stars THE BEST STORIES ARE GOOD AND ALL OF THEM ARE WORTH READING
Reviewed in the United States on August 9, 2013
The best stories in this collection are quite good and even the less successful ones have merit. Books like Bedick's make the case for independent publishing. It's a book to take a chance on.

That said, the book is a hybrid of surreal (hyper-life) stories told in an abstracted, deliberately distanced prose and more conventional realistic narratives. The title story, "An Argument..."is one of the former and it's quite good. A man writes a story about his relationship with his girlfriend, but it's all false because he keeps substituting an alternate reality for it at every point in the narrative. The boy and the girl argue about it, but really about themselves, their relationship, and around it all, a meta-narrative evolves which is about the presentation of reality (and other things as well). In structure, the narrative is a string of elaborate, loosely consequential fantasies. As to content, it shifts back and forth between the couple's relationship and the act of writing. It's hard to nail this story down.
There's a virtuoso paragraph in the middle of the story. The narrator goes off on a rant about writing:

These are thoughts about what the author is doing, not criticisms of it. This story works just because it doesn't nail things down. This too is a trait of much of experimentalist fiction. I'm suggesting that Bedick's hypernarratives could sit quite comfortably on a shelf with the stories of writers like Saunders, Markson, Gary Lutz (Partial List of People to Bleach), Ben Marcus (The Age of Wire and String and The Flame Alphabet).

What about the rest of the stories? "The Loneliest Monk" is a conceit that doesn't work but it's interesting enough en route. ""The Receptionist" is very good -also hyper-real--- and it contains zinger lines and images. The receptionist's quondam boyfriend says to her, "Sometimes I think that life is really one gigantic dentist's office." At the office where she was hired solely for her looks, she's weighed once a month to ensure she's not gaining weight. Here is a detail that points to something real behind the made up fact: how women workers can be taken advantage of at work, objectivized as their appearance.

"A Second Chance" doesn't make it. "The Eden Project" is a clever recasting of the Genesis myth. "Microwave, a Love Story (On Twitter)" is literally that, a narrative presented through a series of tweets. The last three stories -"Daughters," "One Dead Grandfather," "Limousines and Violins" more conventional, are all good.
All in all, on the evidence of this collection, Bedick has made a good case for himself as a comer in the ranks of fiction writers.