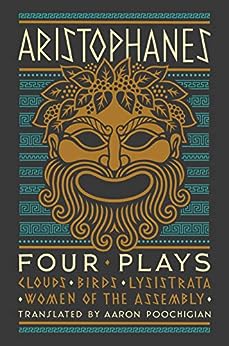 The citizens of ancient Athens enjoyed a freedom of speech as broad as our own. This freedom, parrhesia, the right to say what one pleased, how and when one pleased, and to whom, had no more fervent champion than the brilliant fifth-century comic playwright Aristophanes. His plays, immensely popular with the Athenian public, were frequently crude, even obscene. He ridiculed the great and the good of the city, showing up their hypocrisy and arrogance in ways that went far beyond the standards of good taste, securing the ire (and sometimes the retaliation) of his powerful targets. He showed his contemporaries, and he teaches us now, that when those in power act obscenely, patriotic obscenity is a fitting response.

Aristophanes’s satirical masterpieces were also surpassingly virtuosic works of poetry. The metrical variety of his plays has always thrilled readers who can access the original Greek, but until now, English translations have failed to capture their lyrical genius. Aaron Poochigian, the first poet-classicist to tackle these plays in a generation, brings back to life four of Aristophanes’s most entertaining, wickedly crude, and frequently beautiful lyric comedies—the pinnacle of his comic art:

· Clouds, a play famous for its caricature of antiquity’s greatest philosopher, Socrates;

· Lysistrata, in which a woman convinces her female compatriots to withhold sex from their warmongering lovers unless they negotiate peace;

· Birds, in which feathered creatures build a great city and become like gods;

· and Women of the Assembly, Aristophones’s most revolutionary play, which inverts the norms of gender and power.

Poochigian’s new rendering of these comic masterpieces finally gives contemporary readers a sense of the subversive pleasure Aristophones’s original audiences felt when they were first performed on the Athenian stage.

"Aristophanes was a funny, often obscene, social commentator, and he was also a brilliantly fluent, wide-ranging poet, whose lyric rhythms were recited and sung to music, with dancing. It’s very rare for modern translators to convey his poetic virtuosity or make any attempt to bring his meters to life. But Aaron Poochigan has achieved this feat, crafting polymetric translations that convey the whole range of Aristophanes’s larger-than-life characters and provocative, alternative reality scenarios. This new Aristophanes is zany, sharp, inventive, vivacious, and surprisingly relevant for our times."
― Emily Wilson, translator of Homer’s Odyssey

"To read the comedies of Aristophanes is to see the Greeks as they saw themselves. These are some of the liveliest, most surprising plays to have come down to us from antiquity. Bawdy, ribald, and thrillingly modern, they have the capacity to overturn everything you thought you knew about the ancient world. In this bold and earthy translation, Aaron Poochigian gives us Aristophanes as the Athenians knew him: mischievous, daring, yet somehow very endearing. You cannot help but smile as you turn these pages."
― Daisy Dunn, author of Catullus’ Bedspread and The Shadow of Vesuvius

"Poochigian has reanimated this quartet of Greek dramas with an approach that conveys all the comic energies, political urgencies, and philosophical concerns of the original plays. Alive and alert to the evolutions and mutations of contemporary language but tuned to the pitch and rhythms of ancient literature, these energetic and adroit twenty-first century translations are both effortlessly readable and genuinely theatrical―as lively on the page as they will be on any stage."
― Simon Armitage, Poet Laureate of the United Kingdom --This text refers to the hardcover edition.

Aristophanes was the most celebrated comic playwright in fifth-century BCE Athens.

Aaron Poochigian has published four books of poetry, including American Divine, which won the 2020 Richard Wilbur Poetry Award, and several translations. He lives in New York. --This text refers to the paperback edition.

Richard Lasater
5.0 out of 5 stars Not for everybody and so what.t.
Reviewed in the United States 🇺🇸 on January 5, 2023
Verified Purchase
A great read if you are into this sort of thing, otherwise you will not find a Coupe Deville at the bottom if this particular Cracker Jack box.
Read more
Helpful
Report abuse

AK
5.0 out of 5 stars Fabulous and fun translation
Reviewed in the United States 🇺🇸 on January 27, 2022
Verified Purchase
Poochigian brought Aristophanes back to life, he makes the text dynamic and humorous, as it should be. I cannot recommend this translation enough, if you are interested in Aristophanes then you NEED to buy this book.
Read more
4 people found this helpful
Helpful
Report abuse

Heiko Who
3.0 out of 5 stars Underwhelming
Reviewed in the United States 🇺🇸 on May 29, 2021
Translators of Aristophanes keep trying to convey the poetry, but it’s a hopeless task. Even this translator, a poet himself, can’t do it.

Translations differ mainly in how closely they stick to the text. This translation occupies a middle ground. It doesn’t work. Stretches of colloquial dialog are brought up short by baffling obscurities. Consistently understandable translations already exist (and the one I like best is available for free.)

But your taste may differ. Compare the free sample with a few other translations, and maybe you’ll enjoy this one. I wish I did.
Read more
8 people found this helpful
Helpful
Report abuse
See all reviews

Oliver R. Baker
5.0 out of 5 stars More than readable
Reviewed in Canada 🇨🇦 on August 3, 2021
Verified Purchase
Lysistrata was bawdy from the get go, but for those whose Greek is limited to hunt and pick from LSJ, this new modern translation is great fun - of course, there are anacronisms, for eample he mentions saddles - alas not created until centuries later, but who cares!
Read more
Report abuse
See all reviews
Report an issue
Does this item contain inappropriate content?
Report
Do you believe that this item violates a copyright?
Report
Does this item contain quality or formatting issues?
Report