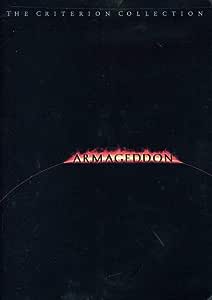 From the blockbuster-making team who produced and directed PEARL HARBOR and THE ROCK (Jerry Bruckheimer and Michael Bay) comes the biggest movie of 1998 -- ARMAGEDDON! Starring the explosive talents of Bruce Willis (DIE HARD), Academy Award(R)-winners Ben Affleck (GOOD WILL HUNTING) and Billy Bob Thornton (SLING BLADE), Liv Tyler (THE LORD OF THE RINGS trilogy), Steve Buscemi (CON AIR), and Will Patton (GONE IN 60 SECONDS), ARMAGEDDON is a meteor storm of action-adventure moviemaking that has you on the edge of your seat forgetting to breathe! When NASA's executive director, Dan Truman (Thornton), realizes the Earth has 18 days before it's obliterated by a meteor the size of Texas, he has only one option -- land a ragtag team of roughneck oil drillers on the asteroid and drop a nuclear warhead into its core. Spectacular special effects, laugh-out-loud humor, great characters, riveting storytelling, and heartfelt emotion make ARMAGEDDON an exhilarating thrill ride you'll want to experience like there's no tomorrow.

The latest testosterone-saturated blow-'em-up from producer Jerry Bruckheimer and director Michael Bay (The Rock, Bad Boys) continues Hollywood's millennium-fueled fascination with the destruction of our planet. There's no arguing that the successful duo understands what mainstream American audiences want in their blockbuster movies--loads of loud, eye-popping special effects, rapid-fire pacing, and patriotic flag waving. Bay's protagonists--the eight crude, lewd, oversexed (but lovable, of course) oil drillers summoned to save the world from a Texas-sized meteor hurling toward the earth--are not flawless heroes, but common men with whom all can relate. In this huge Western-in-space soap opera, they're American cowboys turned astronauts. Sci-fi buffs will appreciate Bay's fetishizing of technology, even though it's apparent he doesn't understand it as anything more than flashing lights and shiny gadgets. Smartly, the duo also tries to lure the art-house crowd, raiding the local indie acting stable and populating the film with guys like Steve Buscemi, Billy Bob Thornton, Owen Wilson, and Michael Duncan, all adding needed touches of humor and charisma. When Bay applies his sledgehammer aesthetics to the action portions of the film, it's mindless fun; it's only when Armageddon tackles humanity that it becomes truly offensive. Not since Mississippi Burning have racial and cultural stereotypes been substituted for characters so blatantly--African Americans, Japanese, Chinese, Scottish, Samoans, Muslims, French ... if it's not white and American, Bay simplifies it. Or, make that white male America; the film features only three notable females--four if you count the meteor, who's constantly referred to as a "bitch that needs drillin'," but she's a hell of a lot more developed and unpredictable than the other women characters combined. Sure, Bay's film creates some tension and contains some visceral moments, but if he can't create any redeemable characters outside of those in space, what's the point of saving the planet? --Dave McCoy