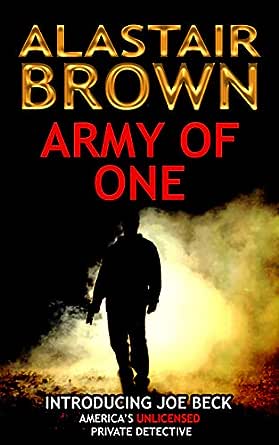 You've subscribed to Joe Beck! We will preorder your items within 24 hours of when they become available. When new books are released, we'll charge your default payment method for the lowest price available during the pre-order period.
Update your device or payment method, cancel individual pre-orders or your subscription at
Your Memberships & Subscriptions
There was an error. We were unable to process your subscription due to an error. Please refresh and try again. 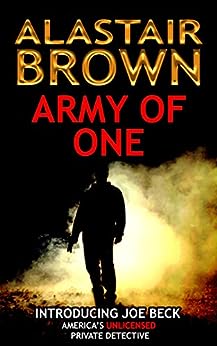 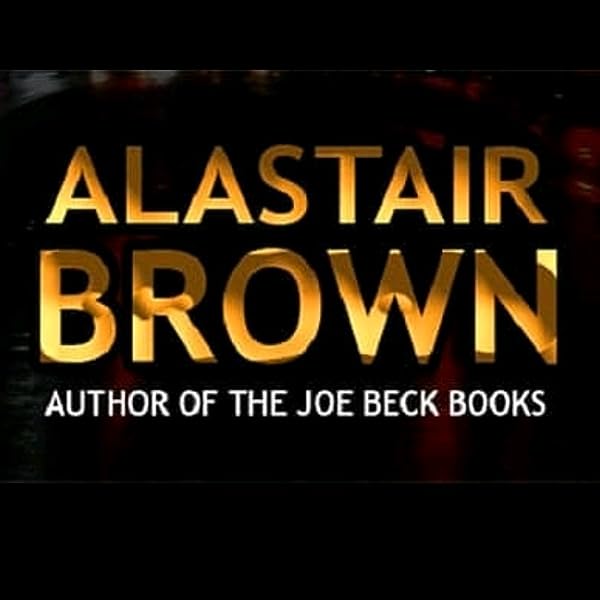 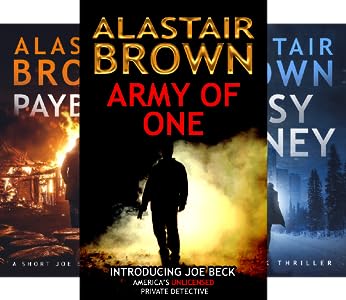 "A well-crafted, well-written thriller that introduces a new kind of crime fiction hero." - BOSTON HERALD
"Alastair Brown has woven a masterpiece here that will make you feel part of everything that's going on in the story." - BOOKSERIESINORDER.COM"The start of the book hooks you right in, two deaths and Joe Beck at a funeral wondering what had happened to one of his best friends. A friend who he would call a brother, did his friend commit suicide or was this a murder?" - BOOKSLIKEJACKREACHER.CO.UK

He was born and raised in Bellshill, Scotland, a small town on the outskirts of Glasgow, where he spent a bit of time as a marketer making adverts for a living. However, it's storytelling and writing that's his real forte. He writes occasionally and for only one thing: entertainment. And when he's not writing, he's imagining - he's thinking up his next plot, visualizing the characters and the scenarios and picturing exactly how Joe Beck would react when faced with the next few conventional and unconventional situations he'll be thrown into.

A bit like Joe Beck, he practically runs on caffeine, drinking anything from five to ten cups of coffee a day. Sometimes, it's more, but it's never less. And he appreciates good old classic rock music and fast, powerful American muscle cars.

3.8 out of 5 stars
3.8 out of 5
56 global ratings
How are ratings calculated?
To calculate the overall star rating and percentage breakdown by star, we don’t use a simple average. Instead, our system considers things like how recent a review is and if the reviewer bought the item on Amazon. It also analyzes reviews to verify trustworthiness.
Top reviews

P.J.
1.0 out of 5 stars Atrocious grammar and editing
Reviewed in the United States on November 21, 2019
Verified Purchase
I couldn’t get past the first chapter of this book because of the pitiful grammar. Missing words, extra words, and bad punctuation made it too distracting to read. A shame, because I think I would have enjoyed it based on the plot summary.
Read more
One person found this helpful
Helpful
Comment Report abuse

donald f riley
5.0 out of 5 stars Action Packed Thrill Ride
Reviewed in the United States on March 14, 2019
Verified Purchase
Fantastic book. I am looking forward to the next installment! If you enjoy Grisham/Clancy etc. pick it up!
Read more
Helpful
Comment Report abuse

Kindle Customer
2.0 out of 5 stars Good main character.
Reviewed in the United States on September 8, 2020
Lots of action. Some not believable. Like most of these authors there is too much unneed descriptions to just fill pages. Such as walking into the coffee shop and describing every detail down to what the employees were wear to the color of the table. This had nothing to do with the story.
Read more
Helpful
Comment Report abuse

Justin R
4.0 out of 5 stars No more “Padding”.. please.
Reviewed in the United States on September 29, 2020
I like the character and the storyline, but for the love of God please refrain from using the tired phrase, “he/she “padded” across the floor/carpet/ground/etc. It gets annoying and a huge man like Beck probably doesnt “Pad” everywhere he goes.
Read more
Helpful
Comment Report abuse

Bob
4.0 out of 5 stars Good read!
Reviewed in the United States on April 1, 2018
Enjoyed even if proofreading was bad and certainly not American spelling. Anyone ever seen a four door Mustang? Not in my lifetime.
Read more
Helpful
Comment Report abuse
See all reviews

Mark Connelly
2.0 out of 5 stars A shame.
Reviewed in the United Kingdom on October 7, 2020
Verified Purchase
Way too much padding. I was demented reading the most superfluous detail imaginable. The police officer was wearing a uniform, it was blue, it had badges, the badges were this colour. On his belt was this. His boots were black. His face was pasty. His hair was thin. Aaaaagh. Over 200 pages too long just because of inane detail that added nothing to the story.

It's a shame, it has potential. Okay it's a Reacher rip off but no ones cares as long as it grips you.

Spoiler. The detail of how the husband died laid out in graphic detail for the wife was frankly utterly inconceivable. One minute her husbands boss couldn't look at her but then minutes later he's relishing in telling her how her husband died. Sorry, Not credible.
Drop the padding and drop the shock violence and there is a story and a character that readers can relate to.

I'll give the next one a miss but hope the author can fine tune it and get a winning formula. The current formula just doesn't work for me.
Read more
Report abuse

Richard K
2.0 out of 5 stars A poor attempt to emulate Jack Reacher. It lacks credibility Mr. Brown,.
Reviewed in the United Kingdom on September 20, 2020
Verified Purchase
Joe Beck is a 6 foot 5 inch monster who can maim or kill with a single punch!. The author needs to read up on his firearms a bit more.
He kits his hero out with small Smith&Wesson which is more suited to conceal in a ladies purse. Give your man at least a .5 Desert Eagle or a 357 Colt Python.
The story is predictable. I also purchased the Easy Money ( the follow on) in a special - I wish I had not bothered.
Read more
Report abuse

Blowin
4.0 out of 5 stars Fast Moving
Reviewed in the United Kingdom on October 10, 2020
Verified Purchase
Quite a good story line with, as others have said, superfluous details, but more importantly appalling editing which brings the reader to a shuddering halt to regularly get back on track. Such a shame when a sloppy approach spoils an otherwise good read.
Read more
Report abuse

BestMum
3.0 out of 5 stars Average.
Reviewed in the United Kingdom on May 30, 2020
Verified Purchase
Just started reading this skimming over the colour of tables and coffee,spelling mistakes etc,lots of unnecessary description, Jack Reacher it's not but Inbetween that not too bad will try and stick with it,I did but slot of it was silly.
Read more
Report abuse

dltan
4.0 out of 5 stars Action packed
Reviewed in the United Kingdom on May 15, 2020
Verified Purchase
Decent story, lots of action
Read more
One person found this helpful
Report abuse
See all reviews