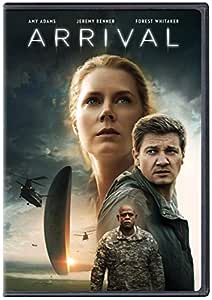 When mysterious spacecrafts touch down across the globe, an elite team - led by expert codebreaker Louise Banks (Amy Adams) - is brought together to investigate.  As mankind teeters on the verge of global war, Banks and the team race against time for answers – and to find them, she will take a chance that could threaten her life, and quite possibly humanity.

4.4 out of 5 stars
4.4 out of 5
10,240 global ratings
How are ratings calculated?
To calculate the overall star rating and percentage breakdown by star, we don’t use a simple average. Instead, our system considers things like how recent a review is and if the reviewer bought the item on Amazon. It also analyzes reviews to verify trustworthiness.

Oakley
5.0 out of 5 stars The Pace Is Amazed Wonder ... Intelligent & Beautiful Movie
Reviewed in the United States on June 20, 2017
Verified Purchase
There are so many reviews here, no one is ever going to read mine, yet I feel compelled to write it anyway. First off, I am NOT a sci-fi fan, but after talking to friends who are, I am inclined to think that is part of the reason I liked this movie. While they thought it was "slow" because they have encountered all kinds of aliens and time warps and weirdnesses in their past viewing and reading, I found the pace just right to process the astonishment of what was unfolding. The characters were me/us/now -- if this was happening in our world, this is how we would be feeling and reacting. We share Louise's (Amy Adams) wide-eyed wonder and appreciate Ian's (Jeremy Renner) amazed, sardonic "Yeah, that just happened." The viewer may feel a bit of uneasy confusion about the seemingly random switching of scenes -- flashbacks? visions? planted memories? -- but all is explained by the end, very simply and without rapid dialogs or long, involved explanations. You might just think, as I did, "Oh, of course. Brilliant."
Read more
471 people found this helpful
Helpful
Comment Report abuse

Kathleen Krueger
5.0 out of 5 stars The conclusion of Arrival haunts me.
Reviewed in the United States on November 28, 2017
Verified Purchase
This movie haunts me. Sometime you watch a movie that makes you feel strong emotions like happiness or anger but not this one. This movie is a drama with an interesting twist at the end. I'll admit it kept me confused, which is what it was meant to do, until towards the end. It moved slow and I kept feeling like I was missing something, just like the main character. Then, when it all came together, I just "got" it, the same way the character did. We think we regard the main character from the outside but in reality we are experiencing the movie through her perceptions. If we remain open, not seeking to interpret the movie, we begin to understand and feel what she feels. This isn't as much about the aliens arriving as it is about a choice. That choice is what haunts me. It makes me question what would I have done with this knowledge? How would I choose? I recommend this movie but when it comes to the message you need to be patient and wait for it.
Read more
166 people found this helpful
Helpful
Comment Report abuse

Lt. Frank Bullitt
4.0 out of 5 stars A deeply moving, thought provoking film set to a science fiction premise--with no ray guns.
Reviewed in the United States on November 22, 2016
Verified Purchase
This is a divisive film. You will love it or hate it, but you will have an opinion. Why are there such strong feelings? I think it results from the way the film was marketed. Critics came out raving about a new Sci-Fi film and called it wildly unpredictable. The public's interest was piqued. After all, it stars Jeremy Renner so it must be a Sci-Fi action movie, right? Maybe it's like a good Independence Day. Wrong! There is only one explosion in this film and I don't think there was a single gun fired. Whoa! What a letdown, right? No.

This is not a Sci-Fi action film. This is Sci-Fi in the same vein as Contact, Solaris, and 2001. Actually, it is very similar to 2001 in many ways and themes. If you thought 2001 was boring, you will hate this film. This is not a film about aliens. This is a film about how we react to adversity and uncertainty. You may have heard that this is a film about time travel. It's not. No one "travels" through time. This film is about supposing that time is relative (which we know it is) and perhaps even malleable if you understand it well enough. The key to understanding time in this film is language. One aspect I think the film got wrong is contrasting science and language. Science is a language. Science is a way to explain the phenomena around you in formulas that can be shared and duplicated with others i.e., a language. They are not adversarial, but the same.

One thing that surprised me greatly was the portrayal of the military. I think this is probably the truest representation of how military personnel would react. These aren't mindless soldiers. They are thinking human beings with human emotions thrust into a situation of unbelievable significance. Some handle it with fear and trepidation while others approach it with care and concern. If we are ever visited by an alien race, the event will transcend the military. It will transcend the government and even nations. The government does not own or have a right to police our access to foreign visitors. This film portrays very well the moral dilemmas between duty and human emotion.

Are there some problems with the film? Undoubtedly it could have added more steps of suspense along the way--just a few morsels to keep the suspense building even more. I think that would have eliminated some of the "boring" complaints. I also think Jeremy Renner did not belong in the film. He is an excellent actor and it's not like he doesn't act his role well, it's just that he brings too much "Jeremy Renner" baggage to the role for me to accept him completely. Amy Adams was perfect for this role, however.

You absolutely should watch this film if you like thinking about it afterwards. Nothing is spoon-fed to you in this film and you will NOT receive all the answers. Much is left open to your interpretation. It will leave you guessing to the very end. What would you do in the same situation?

**Blu-ray note** Having purchase the Blu-ray, I can now speak to it separately from the film. The picture is stunning and one of the best films I have seen. The colors are slightly muted, but I'm sure it's intentional. I just don't remember it being overly dark in the theater.

There are over 80 minutes of extras, although I am slightly apprehensive about watching them. They basically explain the whole point of the film which I feel is better left to your own interpretation. Those who don't like the film won't ever get a chance to see what it was about since they surely won't buy this, but the answers are there if you want them.

Raul G
5.0 out of 5 stars An instant Classic
Reviewed in Mexico on June 17, 2018
Verified Purchase
Just like all of the sci fi classics Arrival is a unique, emotional and intellectual movie experience. It combines the best elements of the past to create something new and fresh. This is one of those films that will definetelly stand the test of time.
The blu ray presentation is also quite good, the image is crear although contrast and color is not as vivid, but in the end it represents fairly well the look intended by cinematographer Bradford Young and director Denis Villeneuve.
The sound desing is superb and the lossless track handles anything from exposions, helicopter sounds and the fantastic score by Johann Johannsson without any trouble.
The package arrived on time and in god shape.
Read more
One person found this helpful
Report abuse

Page 1 of 1 Start overPage 1 of 1
This shopping feature will continue to load items when the Enter key is pressed. In order to navigate out of this carousel please use your heading shortcut key to navigate to the next or previous heading.
Back
Next
Pages with related products. See and discover other items: 2016 movies dvd, new movies on dvd 2017 release, new release dvd movies, new release movies dvd, oscar nominated movies 2017