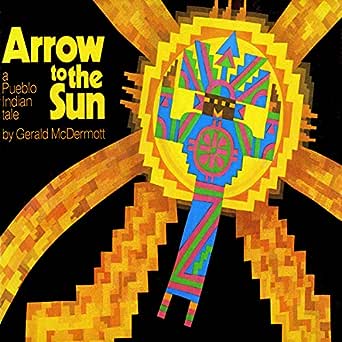 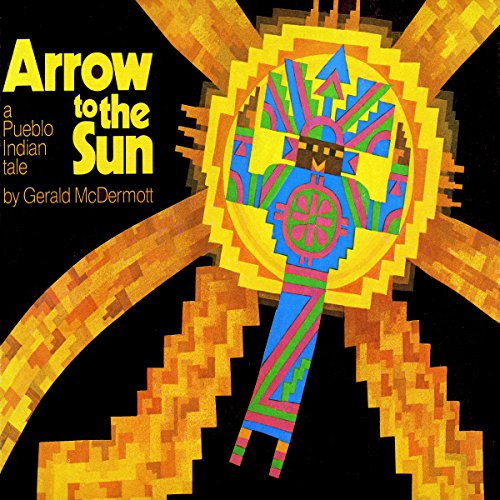 Arrow to the Sun

4.8 out of 5 stars
4.8 out of 5
43 global ratings
How are ratings calculated?
To calculate the overall star rating and percentage breakdown by star, we don’t use a simple average. Instead, our system considers things like how recent a review is and if the reviewer bought the item on Amazon. It also analyzes reviews to verify trustworthiness.
Top reviews

elderberryjam
5.0 out of 5 stars Wonderful Children's Story
Reviewed in the United States on March 13, 2014
Verified Purchase
This book listed as a book to be read for a unit study I picked up for free in our homeschooling group's Mom's Night Out, from another homeschool parent. The unit study was on four books, which we checked out of the library at first; then later ordered for our home library. We used some of the unit study with our daughter for the Kindergarten year, but not the entire unit study. It was on American Indian culture. She fell in love with this book at age 5, and still lists it as one of her favorites at age 7. I think this is partially because of the meaning in the book for her. She says she likes the way the people in it are depicted, and the colorful pictures. She says its meaning is that love can be a challenge.

I would likely never have picked this book off the shelf in the library myself. Although I like native American stories, I tend to go for the pretty pictures (Legend of the Blue Bonnet) in a children's book, not the bold colored, angular art. The boy feels estranged from his community because he does not know who his father is, then finds out that the sun is his father, through going through trials. The trials involve Kivas, or the ritual rooms found in Pueblo structures. In the end he is a part of his community. It IS a nice story.

Amazon Customer
5.0 out of 5 stars as good as i remember
Reviewed in the United States on June 16, 2003
Verified Purchase
My mother read this book to me when I was a child, and I remember loving it, but hadn't seen it in probably 15 years until I bought it for my nephew. It is as good as I remember.
I can attest to the fact that the high contrast, brightly colored drawings are mesmerizing for a small child. The best part of the book is when the boy must complete four tasks for the sun god to prove himself. The tasks are not narrated, you get to see how the tasks are completed from how the drawings change. It's so cool! I felt very smart as a little kid being able to discover what he did and figure it our for myself.
On a cultural note, the narrative is similar to the Christ story. Mother gives birth to the boy (a virgin birth) after the sun god sends a ray of energy to her. The boy grows up and wants to know who his father is, and goes on a quest to find him and prove that he is indeed the son of the sun god. (That's why he becomes an arrow to the sun!)
I think it's good for a child to be exposed to this story to begin to understand the universal elements of religion and that all cultures have a lot in common. Even those that seem strange are not so different from our own.

Nathan Smith
5.0 out of 5 stars Great picture book
Reviewed in the United States on September 1, 2020
Verified Purchase
I enjoyed this book as a child. I purchased this for a small library our church was putting together, but I read through it again. I enjoyed it once again, especially the illustrations.
Read more
Helpful
Comment Report abuse

Liz Volker
5.0 out of 5 stars Awesome.
Reviewed in the United States on October 9, 2018
Verified Purchase
This rating is based on how fast my book arrived, the condition in which the book arrived, and how much we LOVE this book in our home. We have been checking it out from the library and readin it for bedtime for about 4 years and decided to get a copy of our own. Glad to have found it at a great price!
Read more
Helpful
Comment Report abuse

susan g
5.0 out of 5 stars Loved by
Reviewed in the United States on February 10, 2018
Verified Purchase
I bought for my grandson as a request from my son since it was one of his childhood favorites. Loved by all
Read more
Helpful
Comment Report abuse

Amazon User
5.0 out of 5 stars Five Stars
Reviewed in the United States on January 18, 2018
Verified Purchase
One of my favorite books from gradeschool. Had to have it!
Read more
Helpful
Comment Report abuse

S.Markel
5.0 out of 5 stars Exquisite
Reviewed in the United States on December 21, 2014
Verified Purchase
Exquisite tale and wonderful illustrations to match. This is a classic and I hope many children get to enjoy this particular book. It captures the flavor of the southwest and the Pueblo Indian art.
Read more
Helpful
Comment Report abuse
See all reviews

Yogini DK
5.0 out of 5 stars Very good story and fascinating illustrations.
Reviewed in the United Kingdom on November 22, 2015
Verified Purchase
Another brilliant book from Gerald McDermott. The story is a typical hero's journey, this time in search of a father figure. Illustrations are fascinating and very appropriate to the mood and setting of the story. My only (small) complaint is that there are no references to other sources for the story.
Read more
Report abuse
See all reviews