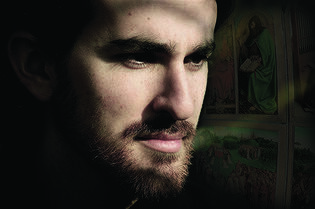 The Art of Forgery: The Minds, Motives and Methods of Master Forgers Hardcover – May 12, 2015

by Noah Charney (Author)
4.6 out of 5 stars 129 ratings
See all formats and editions
Sorry, there was a problem loading this page. Try again.

The Art of Forgery: The Minds, Motives and Methods of Master Forgers explores the stories, dramas and human intrigues surrounding the world's most famous forgeries - investigating the motivations of the artists and criminals who have faked great works of art, and in doing so conned the public and the art establishment alike.

"Charney truly hits stride when describing the forgers... As the world of forgery is infinitely colorful."―Bloomberg

"A serious subject described in vastly enjoyable fashion with implications both subtle and obvious, about serious issues... A romp of a read."―Art Quarterly - Marina Vaizey

"Charney truly hits stride when describing the forgers..as the world of forgery is infinitely colorful."―Bloomberg.com

Noah Charney is a professor and an international author of fiction and non-fiction, specializing in the fields of art history and art crime. He is the founder and president of ARCA, the Association for Research into Crimes against Art, a non-profit research group on issues in art crime. His work in the field of art crime has been praised in such international forums as the New York Times Magazine, Time Magazine, BBC Radio, National Public Radio, El Pais, Vogue, Vanity Fair, Playboy, Elle and Tatler among many others. He has appeared on radio and television as an expert on art history and art crime, including BBC, ITV, CNBC and MSNBC. Charney is the author of numerous articles and a novel, The Art Thief (2007).

Noah Charney holds Masters degrees in art history from The Courtauld Institute and University of Cambridge , and a PhD from University of Ljubljana. He is Adjunct Professor of Art History at the American University of Rome, a Visiting Lecturer for Brown University abroad programs, and is the founder of ARCA, the Association for Research into Crimes against Art, a non-profit research group on issues in art crime (www.artcrimeresearch.org).

His work in the field of art crime has been praised in such forums as The New York Times Magazine, Time Magazine, The Wall Street Journal, BBC Radio, National Public Radio, El Pais, Vogue, Vanity Fair, and Tatler among others. He has appeared on radio and television, including BBC, ITV, CNBC, National Geographic and MSNBC, as a presenter and guest expert. He is in constant demand as a lecturer. He has given popular TEDx talks, was a finalist for the main TED event, and teaches a Guardian Masterclass called "How to Write About Art."

Charney is the author of numerous academic and popular articles, contributing regularly to The Guardian, the Daily Beast, Atlantic, Salon, The Art Newspaper, The Believer, Esquire and many others. His first novel, The Art Thief (Atria 2007), is currently translated into seventeen languages and is a best-seller in five countries. He is the editor of an academic essay collection entitled Art & Crime: Exploring the Dark Side of the Art World (Praeger 2009) and the Museum Time series of guides to museums in Spain (Planeta 2010). His is author of a critically-acclaimed work of non-fiction, Stealing the Mystic Lamb: the True History of the World’s Most Coveted Masterpiece (PublicAffairs 2011), which is a best-seller in two countries. His latest book is The Thefts of the Mona Lisa: On Stealing the World’s Most Famous Painting (ARCA Publications 2011). Upcoming books include The Art of Forgery (Phaidon 2015) and The Collector of Lives: Giorgio Vasari and the Invention of Art (Norton 2015). He lives in Italy and Slovenia, and lectures internationally in the subjects of art history and art crime. Learn more at www.noahcharney.com or join him on Facebook.

Nancy K. Napier, Author
5.0 out of 5 stars Perfect for the art newcomer
Reviewed in the United States on July 23, 2022
Verified Purchase
I first learned about Noah Charney from a New York Times article about him in December 2006 when I was writing a book about creativity and the value of bridging and blending ideas. As a doctoral student, Charney melded several disciplines to create a new field of study and practice. He combined art history, criminology, psychology, and statistics and then applied that knowledge to help find and thwart art thieves. He has continued to break ground in new ways and in new books. The Art of Forgery considers the psychology of “deceivers,” whether they do it because of pride, revenge, or sometimes just because the opportunity presents itself. While this gets to the “why they do it,” understanding how they may be caught, including the scientific methods of authentication in the final notes is equally fascinating.
Read more
Helpful
Report abuse

RPF
5.0 out of 5 stars ample motivations for the revenge of the forgers
Reviewed in the United States on July 7, 2015
Verified Purchase
The layout of the book is unconventional, but the material itself is fascinating. This, like the recent movie "Big Eyes" and the works of contemporary artists like Banksy and Koons stimulates the age-old debate of what art "is". Aristotle's definition (pg. 108) seems amazingly accurate over 2,000 years later. Because so much is covered in such a brief manner, it certainly will lead me to more detailed books and primary sources amply provided in Charney's "Selected Bibliography." I find the effects of mass psychology (the willingness to be fooled that greed begets), institutional jealousies, the arrogance of the "connoisseur" class, and the exclusivity of gallerists - all fascinating - and all ample motivation for the revenge of the forgers.
Read more
16 people found this helpful
Helpful
Report abuse

paperlady
5.0 out of 5 stars A fascinating subject and a good read.
Reviewed in the United States on July 15, 2015
Verified Purchase
A great read - you need not know anything about art - but it does help. I strongly recommend this to anyone who has ever asked themselves "Why does someone make fakes (apart from monetary gain)?" and way are we taken in - and so fascinated by the subject.
I did return this - but only because my sister gave me a signed copy for my birthday.
Read more
9 people found this helpful
Helpful
Report abuse

martin collmer
3.0 out of 5 stars A Somewhat derivative work
Reviewed in the United States on March 8, 2022
Verified Purchase
The author seems to have gotten a great deal of his material from other authors
Read more
Helpful
Report abuse

William
5.0 out of 5 stars Definitive!
Reviewed in the United States on May 31, 2021
Verified Purchase
Well-written, thorough, and illuminating - a riveting read.
Read more
Helpful
Report abuse

bifocals
5.0 out of 5 stars Good book
Reviewed in the United States on September 8, 2020
Verified Purchase
Order arrived before date expected and in perfect condition.
Would order again from this seller
Read more
Helpful
Report abuse
See all reviews

Jacob la Cour
5.0 out of 5 stars Great introduction to the history and background of art forgery
Reviewed in the United Kingdom on November 22, 2015
Verified Purchase
Extremely well written and interesting book about the many different faces of art forgery. The book is divided into chapters based on the different aims of the forgers, be it pride, revenge, fame, money, power etc. Each chapter treats different historical crimes - both old and new, and details the methods used by the forgers, and how they were discovered. The book is beautifully illustrated with numerous color photographs of the described Works, and generally of an extremely good quality, thich paper and no typos. Each chapter is relatively short, so it never becomes tedious. If you look for in-depth litterature, this is probably not for you, but it is a great introduction to the history of art forgery.
Read more
8 people found this helpful
Report abuse

pseudo
5.0 out of 5 stars 10/10
Reviewed in the United Kingdom on September 23, 2018
Verified Purchase
Lovely édition and mesmerising topic. I read it in one go during a single weekend. Totally recommend it as the perfect present for art lovers
Read more
One person found this helpful
Report abuse

Mrs. G. M. Nash
5.0 out of 5 stars Interesting read
Reviewed in the United Kingdom on November 15, 2019
Verified Purchase
Anyone interested in antique or vintage are would find this book interesting
Read more
One person found this helpful
Report abuse

Amazon Customer
5.0 out of 5 stars Brilliant reading
Reviewed in the United Kingdom on May 20, 2020
Verified Purchase
Highly recommend this book
Read more
One person found this helpful
Report abuse
See all reviews