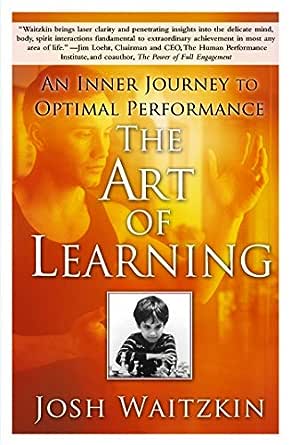 The Art of Learning: An Inner Journey to Optimal Performance Kindle Edition

Flip to back Flip to front
Audible Sample Playing... Paused   You are listening to a sample of the Audible narration for this Kindle book.
Learn more
ISBN-13: 978-0743277464
ISBN-10: 0743277465
Why is ISBN important?
ISBN
This bar-code number lets you verify that you're getting exactly the right version or edition of a book. The 13-digit and 10-digit formats both work.

"The Art of Learning succeeds on every level, combining a truly compelling auto-biography with profound philosophical and psychological insights all wrapped in a practical how-to framework. This is a must-read for anyone wishing to achieve that rare combination of success and fulfillment." -- Paul Blease, SVP, Director, Team Development & Consulting, Citigroup Smith Barney

Josh Waitzkin, an eight-time National Chess Champion in his youth, was the subject of the book and movie Searching for Bobby Fischer. At eighteen, he published his first book, Josh Waitzkin's Attacking Chess. Since the age of twenty, he has developed and been spokesperson for Chessmaster, the largest computer chess program in the world. Now a martial arts champion, he holds a combined twenty-one National Championship titles in addition to several World Championship titles. When not traveling the country giving seminars and keynote presentations, he lives and trains in New York City. He can be reached at www.joshwaitzkin.com. For more information about Chessmaster visit www.ubi.com. --This text refers to the paperback edition.

Waitzkin's name may sound familiar—back in 1993, his father wrote about Josh's early years as a chess prodigy in Searching for Bobby Fischer. Now 31, Waitzkin revisits that story from his own perspective and reveals how the fame that followed the movie based on his father's book became one of several obstacles to his further development as a chess master. He turned to tai chi to learn how to relax and feel comfortable in his body, but then his instructor suggested a more competitive form of the discipline called "push hands." Once again, he proved a quick study, and has earned more than a dozen championships in tournament play. Using examples from both his chess and martial arts backgrounds, Waitzkin draws out a series of principles for improving performance in any field. Chapter headings like "Making Smaller Circles" have a kung fu flair, but the themes are elaborated in a practical manner that enhances their universality. Waitzkin's engaging voice and his openness about the limitations he recognized within himself make him a welcome teacher. The concept of incremental progress through diligent practice of the fundamentals isn't new, but Waitzkin certainly gives it a fresh spin. (May 8)
Copyright © Reed Business Information, a division of Reed Elsevier Inc. All rights reserved. --This text refers to an out of print or unavailable edition of this title.

Waitzkin, a champion in chess and martial arts, brings enthusiasm and obvious love of learning to this amazing look at what he aptly describes as the art of learning. He begins by recounting his own quirky journey. At the age of six, Waitzkin learned chess from a motley crew of street hustlers, gamblers, junkies, and artists. Since then, he has been among the highest-ranked chess players. He recounts the distractions of adolescence as well as fame after the publication of his father's book and, later, the film based on it, Searching for Bobby Fischer. He later discovered that chess principles could be applied to learning tai chi. In fact, he found a respect for artistry, meditation, and philosophical devotion within both chess and martial arts and realized the possibility for broader application to learning in general. Waitzkin integrates his personal experiences in mastering chess and tai chi with research on psychology and learning techniques to offer a vibrant and engaging look at the love of learning and the pursuit of excellence. Vanessa Bush
Copyright © American Library Association. All rights reserved --This text refers to an out of print or unavailable edition of this title.
Read more