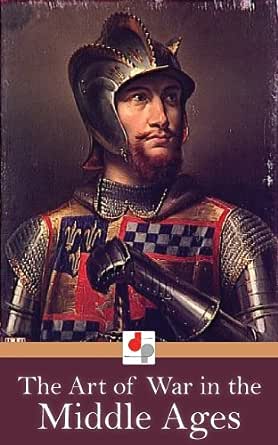 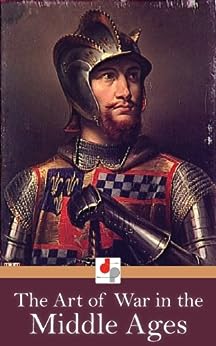 The Art of War in the Middle Ages (Illustrated) Kindle Edition

"It deals with the period of 379–1515 A.D., a period in military history which saw the domination of the heavy cavalry, and does so in a fast-paced prose which makes the book every bit as exciting as an adventure novel."

"Oman traces here with great skill the broad lines of European military history from the Late Roman Empire to the Renaissance.... An authoritative and highly readable study."

John Beeler is Professor of History at the University of North Carolina at Greensboro and the other of Warfare in England, 1066–1189, also from Cornell.

4.0 out of 5 stars
4 out of 5
16 customer ratings
How does Amazon calculate star ratings?
Amazon calculates a product’s star ratings based on a machine learned model instead of a raw data average. The model takes into account factors including the age of a rating, whether the ratings are from verified purchasers, and factors that establish reviewer trustworthiness.
Top reviews

I. MCCREARY
5.0 out of 5 stars Outstanding
Reviewed in the United States on April 26, 2013
Verified Purchase
Skip Clausewitz. CWC Oman is far more interesting.
I keep having to re-purchase this book as I lend my copy to people and never get it back. To my mind this is one of the best (it not so well known) works around.
Read more
4 people found this helpful
Helpful
Comment Report abuse

G. Hoversten
1.0 out of 5 stars Do not read this highly edited edition
Reviewed in the United States on November 3, 2013
This edition is severely abridged version of the original. If you are interested in Oman's remarks and conclusion, read the original work. This edition only gives a summary of his conclusionand none of the individual battles or examples he uses to substantiate his conclusions. Very poor edition made for use in college courses. Not recommended. Read the unabridged version which I give 4 stars.
Read more
13 people found this helpful
Helpful
Comment Report abuse

T. Warner
5.0 out of 5 stars Don't Fight The Last War!
Reviewed in the United States on June 21, 2008
An excellent exploration of how people always want to fight the last war. Whenever someone in the Middle Ages would come up with a new tactical innovation, they would dominate for awhile before being swept aside by the next innovation. Everyone thought that their winning method was the end all solution to victory in war and therefore refused to change. The French, British, Swiss, Spanish, Italians, Poles, Hungarians and Bohemians are all shown staying with what has always worked even when it has ceased to work. The Byzantine are held up as the exception to this pattern in that they used tremendous skill and flexibility to preserve their empire against terrible odds for more than 500 years. The book also points out very well that, other than among the Byzantines, the sophistication of tactics sunk to a very low level after the Roman period. Tactical thinking was crude in the extreme (sending a small force around behind the enemy was considered bold and brilliant). Strategy was nonexistent until near the end of the period. First written as an essay in 1885 and later expanded into a book. Was very influential in the early 20th Century. The book is on Patton's reading list.
Read more
2 people found this helpful
Helpful
Comment Report abuse

James J. Moloney
5.0 out of 5 stars The Success of the Swiss Well Explained
Reviewed in the United States on November 3, 2007
Excellent introduction to medieval warfare and its origins. If you're a fan of medieval history once you've finished this book your first action will be to reread it immediately. The section of the book that I most enjoyed was the part that dealt with the Swiss military exploits of the fourteen and fifteen centuries. The near total superiority (for over two hundred years) of Swiss pikemen and halberdiers against feudal armies lead by mounted knights was certainly a revelation to me. Coming to medieval warfare from a perspective rooted firmly in the British Isles I had always thought that the only successful answer to heavy feudal cavalry was massed longbow men. This book shows that feudal heavy cavalry died just as effectively on Swiss pikes and halberds as they did on Welsh and English arrows. This is not even to mention the hussites of Bohemia. If you're a student of medieval history you'll not regret purchasing this book.
Read more
3 people found this helpful
Helpful
Comment Report abuse

Razvigor
5.0 out of 5 stars A historical document in its own right
Reviewed in the United States on January 23, 2004
The Art of War in the Middle Ages was first published in 1885 in Oxford and London. A revised edition was re-published in 1953, with indicators of revisions included in the text. This particular portion is true to the original, using particular terminology. It is part of the section that deals with the "arms, organization and tactics of the Byzantine armies". The 19th century scientist uses the term "Macedonians" as a synonum for "semi-Romanized Slavs" of the early Middle Ages, a proof against the claims of anti-Macedonian propagandists who attempt to portray the Macedonian people as a recent "invention." A quote:
"It would appear that Maurice had intended to break down the barrier which has been imposed in the fourth century between the class which paid the taxes and that which recruited the national army. "We wish," he writes, "that every young Roman of free condition should learn to use the bow, and should be constantly provided with that weapon and with two javelins." If, however, this was intended to be the first step toward the introduction of universal military service, the design was never carried any further. Three hudnred years later Leo is found echoing the same words, as a pious wish rather than as a practical expedient. The rank and file, however, of the imperial forces were now raised almost entirely within the realm, and well-nigh every nation contained in its limits, except the Greeks, furnished a considerable number of soldiers. The Armenians and Isaurians in Asia and the Thracians and Macedonians--or more properly the semi-Romanized Slavs--in Europe were considered the best material by the recruiting officer."
The whole book is enjoyable and provides intelligeble analysis of military matters. The "100 year war" part is especially memorable and well laid-out.
Read more
7 people found this helpful
Helpful
Comment Report abuse

James Jen
5.0 out of 5 stars immensely readable
Reviewed in the United States on July 31, 2001
This is an excellent and fascinating work. I highly recomend it for anyone interested in warfare, the middle ages, or both. It is full of well-researched insights and synthesizes and provides a broad general framework for understanding warfare in this period. Serious scholars or those seeking to use this as a textbook should note that the original version that forms the basis of this book was written a century ago and is probably outdated, despite the rewritten portions. However, the greatest strength of this book is that it is extraordinarily well-written, and a pleasure to read.
Read more
10 people found this helpful
Helpful
Comment Report abuse
See all reviews from the United States

Antony Dalton
4.0 out of 5 stars Handy book on the medieval period warfare
Reviewed in the United Kingdom on February 8, 2016
Verified Purchase
Handy book on the period. Few illustrations and none in colour but Its text is a useful read for the student of medieval warfare. Its small format is handy and means you can carry it with you to read on a journey.
Read more
Helpful
Sending feedback...
Thank you for your feedback.
Sorry, we failed to record your vote. Please try again
Report abuse