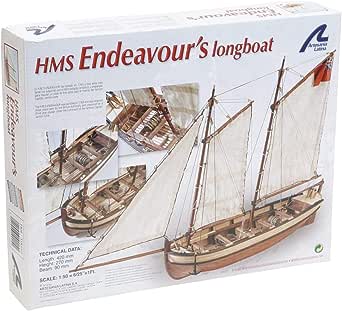 The longboat of the HMS Endeavour's captain is a wooden model kit for initiation into the naval modeling. This amazing kit includes a complete set of full colored instructions and all parts required to complete the scale model, woods, sails, threads, metal accessories...

Frank
4.0 out of 5 stars Good starter
Reviewed in the United States on January 5, 2020
Verified Purchase
I bought this as a trial to see how I would do at ship building. So far so good. It's been a challenge and some portions of the directions could be a bit more clear. All in all they're not bad. I should have watched a couple of YouTube videos before starting but I learned a lot by doing it with their help. I believe these models are a bit over priced but the quality has been good. I think I'll continue with this hobby,bat least for a couple more builds and reevaluate after that.
Read more
One person found this helpful
Helpful
Report abuse

Sparkly Raven
5.0 out of 5 stars Great
Reviewed in the United States on June 2, 2017
I haven't started building it yet but I've looked at the contents and the manual. It looks great.
Looks like a high quality kit. The manual is thick and printed in full color! It looks easy & fun
to build. I will update later as I build this boat. So far I love it!

Paul
4.0 out of 5 stars A great kit with a couple of minor niggles.
Reviewed in the United Kingdom on September 27, 2017
Verified Purchase
Just completed it as the first build; took me, I reckon, about a hundred hours.
The good things.
If you look up reviews of AL kits, they seem to be mixed - wood quality is mentioned along with other things. I've found no issues with it, and there was enough of it with a bit even left over. I haven't used any other kits, so I've got nothing to compare it with, but the quality seemed spot on.
It's fairly easy to build; I am by no means an expert or a DIY enthusiast, but I've managed. You do need tools, though - a plank bender is a must (AL do them, and they're OK), pliers, tweezers, mini-drill, knife, ruler(s) etc. Get yourself a needle threader for the rigging - I don't know how I'd get through without one. A good light also helps a lot.

The bad things.
The biggest turn off was that there wasn't enough thread. I ran out of the brown one after putting up seven shrouds out of eight, and had about two inches of cut-offs, with a couple of feet still needed. So it's not me being wasteful - there clearly wasn't nearly enough. You can get more online, but that means days of wait while you're mere hours away from completing the build; I couldn't get the exact colour match in a local shop, so ended up cutting the shrouds down and re-doing them all. Why did they do it, I have no idea - 10 m. of thread cost me £1.80, so why not include a bit extra? Especially given that shrouds are easy with simple access, but when it comes to trickier bits, you don't want to worry about saving the thread. A simple thing, really, and only a minor blemish on how good the whole kit is, but it could put a halt on it for days...
Another one is that hinge pins for the rudder were missing. Yes, definitely missing, I haven't lost them, or overlooked them - as I said, the boat is finished, and what's left in the box certainly isn't them. So, had to make do with a couple of small rivets I had at hand - not ideal.
Instructions are a separate story on their own right. Well, AL never claimed to provide a boat building textbook, so you can't really blame them for that, but be prepared not to have techniques explained. There are a few tips at the beginning of the booklet, but it's far from all you need, and some essential bits, like planking, are pretty much not explained - it just says 'plank the hull'. So, get yourself a copy of 'Ship Modeling Simplified', or at least do some research on t'Internet, don't rely on the booklet. The sequence of steps could be thought through better - e.g., you don't want to hang the anchor off the hull mid-build, it'll get in the way. In fact, I put the ropes, the buckets, the oars and the anchor in last thing, and I think that's the way. There were other things like that, too, so use your judgement and plan ahead (but caveat lector - sometimes the sequence is there for a reason). The language could be much better, from something silly like a suggestion that you should 'blue' something in place, to unclear wording and wrong terminology that makes it harder to understand. Some things are just ignored - e.g., the height of the boom supports, I had to figure them out in situ.
None of these are particularly massive, though, and didn't create significant setbacks. Just more of a challenge.

As a whole, if you've got patience and a steady hand, it's a great kit to get your teeth around - a great learning exercise for the techniques, and the relative simplicity means you can progress reasonably quickly, and see the result emerge before your very eyes. As a good indicator, I am now itching to get into the next build straight away, I've enjoyed the process and the result so much.

Amazon Customer
4.0 out of 5 stars Not for the beginner
Reviewed in the United Kingdom on June 22, 2020
Verified Purchase
The instructions are what lets this model down. It assumes you have a working knowledge of wooden model making and lacks the detail required to make the building a pleasure. Due to the lack of defined instructions it is possible to break / waste materials trying to work out how to achieve certain steps, especially with regards to the hull planking.
Read more
One person found this helpful
Report abuse

walleyer
4.0 out of 5 stars Instructions not the best
Reviewed in the United Kingdom on November 4, 2018
Verified Purchase
This is my first model boat kit purchase and so far things are looking good, nice quality. The only real concern is the poor instructions when it comes to the planking stage. The internet will be my saviour and I'm looking forward to the challenge
Read more
4 people found this helpful
Report abuse

Luca
5.0 out of 5 stars Great!
Reviewed in the United Kingdom on May 25, 2020
Verified Purchase
First ship model i am building and so far its great, stuck in quarantine. Quality of the materials is fantastic. I wish sometimes that there was a few more pictures in the insrtuctions book but it also fun just figuring it out. Wish i got one sooner.
Read more
One person found this helpful
Report abuse

Amazon Customer
5.0 out of 5 stars Great
Reviewed in the United Kingdom on May 1, 2019
Verified Purchase
I bought this for my boyfriend and he absolutely loves it!! It's quite difficult and very intricate so wouldn't recommend for beginners. Many many hours of work in it! Arrived sooner than expected. Would definitely recommend this kit.
Read more
Report abuse
See all reviews
Pages with related products. See and discover other items: models 1 50, wooden model ship kits, wooden ship model kits, Wooden Model Ship Kits, Wooden Ship Model Kits, ship model kits