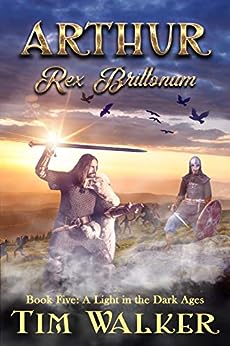 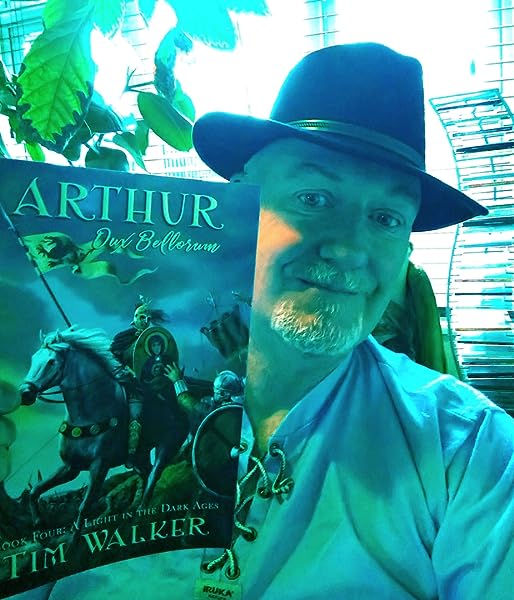 by Tim Walker (Author) Format: Kindle Edition
Book 5 of 7: A Light in the Dark Ages
See all formats and editions
Sorry, there was a problem loading this page. Try again.
FROM THE DECAY OF POST-ROMAN BRITAIN, ARTHUR SEEKS TO UNITE A TROUBLED LAND

Arthur Rex Brittonum (‘King of the Britons’) is an action-packed telling of the King Arthur story rooted in historical accounts that predate the familiar Camelot legend.
Britain in the early sixth century has reverted to tribal lands, where chiefs settle old scores with neighbours whilst eyeing with trepidation the invaders who menace the shore in search of plunder and settlement.

Arthur, only son of the late King Uther, has been crowned King of the Britons by the northern chiefs and must now persuade their counterparts in the south and west to embrace him. Will his bid to lead their combined army against the Saxon threat succeed? He arrives in Powys buoyed by popular acclaim at home, a king, husband and father - but can he sustain his efforts in unfamiliar territory? It is a treacherous and winding road that ultimately leads him to a winner-takes-all clash at the citadel of Mount Badon.

Tim Walker’s Arthur Rex Brittonum picks up the thread from the earlier life of Arthur in 2019’s Arthur Dux Bellorum, but it can be read as a standalone novel.

Tim Walker is an independent author based in the UK. His latest book is a thrilling dual timeline novel, Guardians at the Wall, published in June 2021. Archaeologists uncover artefacts that connect them to the life of a Roman centurion in second century Roman Britain.

Arthur, Rex Brittonum, a re-imagining of the King Arthur story, is book five in his historical series, A Light in the Dark Ages, and follows on from 2019's Arthur Dux Bellorum. Book one in the series is Abandoned (second edition 2018), followed by Ambrosius: Last of the Romans (2017); and book three is Uther's Destiny (2018). Series book covers are designed by Canadian graphic artist, Cathy Walker. The series connects the end of Roman Britain to elements of the Arthurian legend, presenting an imagined history (inspired by early historical sources) of Britain in the early Medieval period, once called the Dark Ages.

Tim lives near Windsor - close to the River Thames - the inspiration for his first book of short stories, Thames Valley Tales (2015). In September 2017 he published a second book of short stories, Postcards from London. These stories draw on the local history and current affairs of towns and cities along the course of the Thames where the author has lived and worked. A new collection of poems and short fiction, Perverse, was published in April 2020.

His first novel was a political thriller, Devil Gate Dawn, that received pre-publication exposure on the Kindle Scout programme in March/April 2016. It found a wide readership due to its unnerving predictions of a post-Brexit Britain beset by political turmoil under King Charles III's rule and buckling under attacks from terrorist groups and includes a chapter that anticipated life in Trump America, written a year before his election.

In early 2017 he published his first children's book, co-authored with his daughter, Cathy - The Adventures of Charly Holmes. Another adventure story was published in 2018 - Charly & The Superheroes, followed by Charly in Space (2020).

Find out more about the author at - https://timwalker1666.wixsite.com/website

Linnet Lane
5.0 out of 5 stars It's Arthur, Jim, but not as we know him
Reviewed in the United Kingdom 🇬🇧 on May 28, 2020
Verified Purchase
The first page of this historical novel plunged me into the sea spray and clamour of a pirate chase and from then I was immersed in the sixth century.

In this latest segment of the saga, Arthur and his army are again urged to take up their lances and defend their countrymen. The ritual of bravado that builds to the cut and thrust of the high energy battle scenes might be the highlight for many readers, but some of my favourite scenes feature the homely clerics who tailor their piety to the pastoral needs of their flock. The broader plot draws on historical accounts, and snippets of historical detail abound, but this certainly isn't a predictable read. It's an original tale crammed with bravery and betrayal that's set amidst the splendour of old Roman forts and Britain's lush and varied landscapes, and I was sorry when it ended.
Read more
One person found this helpful
Report abuse

Richard
5.0 out of 5 stars The final episode of King Arthur's destiny
Reviewed in the United Kingdom 🇬🇧 on September 4, 2020
Verified Purchase
A riveting read. No fantasy tale here, but a solid down-to-earth human story of idealism, lust for power, and very human frailties of doubt and betrayal. Sixth century Britain is wonderfully described in detail, again showing the author's fascination with the uneasy transition from the Roman period to a new era of tribal in-fighting, alliances of mutual need, and the ever-present threat of invasion and domination by invaders from across the seas.

The gripping battle scenes are skillfully portrayed with cunning strategies of both the attackers and defenders adding to the realism of the brutal close-quarter combat. The reader is immersed in the harsh realities of the Britain of the Dark Ages - separate kingdoms constantly wary of outside threats and a collision of cultures both from within the islands and from those who sought to colonize it from abroad. Added to this is the tussle between early Christianity and native pagan beliefs that imbue Arthur's world with a fascinating layer.

A very enjoyable read for those who like Arthurian legend and for those wishing to peek into sixth century Britain through the eyes of the author.
Read more
Report abuse

Val
5.0 out of 5 stars Great story.
Reviewed in the United Kingdom 🇬🇧 on May 1, 2021
Verified Purchase
I really loved this book. Great story. The Arthur Legend makes a fascinating read. I highly recommend this book to everybody.
Read more
Report abuse
See all reviews
Report an issue
Does this item contain inappropriate content?
Report
Do you believe that this item violates a copyright?
Report
Does this item contain quality or formatting issues?
Report