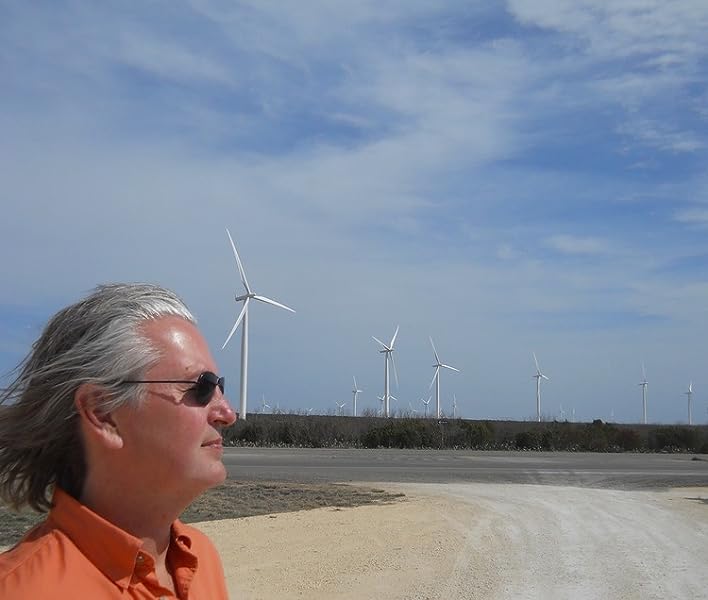 Starred Review. Sterling (Visionary in Residence: Stories), the godfather of cyberpunk, demonstrates his full range, from far future to forgotten past, in this well-stocked career-spanning collection of his finest SF pieces. His blend of uncompromising realism and irrepressible optimism shows up wherever his protagonists do, whether working for a stranded alien in Crusader-era Palestine (The Blemmye's Stratagem), investigating a mock space journey inside the cavern left from a Chinese H-bomb test (Taklamakan) or just hanging around (literally) in 2037 Chattanooga, fixing bikes and foiling a black ops agent out to protect her senile senator boss (Bicycle Repairman). Sterling is both Cassandra and Scheherazade, always forced to spill the ugly truths about what's to come in spite of our unconcern, but always willing to see if the doom can be held off for another night by one more good story. Readers who like a hard-eyed view of the future combined with a wry wink at the past, with a few inventive postmodern narrative kicks mixed in, will be greatly rewarded. (Aug.)
Copyright © Reed Business Information, a division of Reed Elsevier Inc. All rights reserved.

Sterling's speculative fiction dazzles from the get-go, bombarding the reader with one extraordinary concept after another. The Sharper/Mechanist stories depict posthumans living in a society divided between those who have been modified by genetic engineering and others who have been altered by technology. But Sterling's early sf and fantasy are as likely to be set in the past as in the present or near future. Dinner in Audoghast is a startling cautionary tale of a society convinced it has reached the pinnacle of sophistication; in it, the guests at a feast in the Ghanaian empire that prospered a millenium ago arrogantly dismiss a fortune-teller's (highly accurate) apocalyptic prophecies. In Flowers of Edo, denizens of Edo (later called Tokyo) quixotically battle new technologies imposed by Western powers. The Leggy Starlitz stories feature that hero, a crafty opportunist with a can-do attitude. In Hollywood Kremlin, Starlitz smuggles contraband as the Soviet Empire crumbles and Armenian-Muslim antogonism brews. This significant retrospective of Sterling's career reveals a prescience that is bold and astounding. Segedin, Ben

Polemicist, provocateur, futurist, visionary in residence, Bruce Sterling has been out there, personally sharpening the cutting edge of science fiction for more than thirty years.From his first story Man-Made Self in 1976 to his latest Kiosk in 2007, Sterling has written science fiction that is fast-moving, sharply extrapolated, technologically literate, and as brilliant and coherent as a laser, as he himself once said of William Gibson. His Shaper/Mechanist stories were an essential part of the cyberpunk movement of the 80s, just as his Leggy Starlitz and Chattanooga stories wrangled the near future of the 90s better than anyone else. Whether writing about the deep future in Schismatrix or the deep present in Holy Fire, he has developed into the best science fiction writer working in the world today.
Read more
Start reading Ascendancies: The Best of Bruce Sterling on your Kindle in under a minute.

4.2 out of 5 stars
4.2 out of 5
9 customer ratings
How does Amazon calculate star ratings?
Amazon calculates a product’s star ratings based on a machine learned model instead of a raw data average. The model takes into account factors including the age of a rating, whether the ratings are from verified purchasers, and factors that establish reviewer trustworthiness.
Top Reviews

Vazhaspa Spitman
4.0 out of 5 stars The Shining Sun through Disturbing Clouds
Reviewed in the United States on June 27, 2015
Verified Purchase
The author's introduction to this collection of stories tells it all. I think anyone interested in writing a science fiction should read this introduction. It shows the artsy intelligence of the author and the roots of his unique style (turning his encyclopedic knowledge to stories) as well as his obsession with some stuff that act as hindrance to his artistic power.
Sterling might be criticized for being much into the line of literary mass-production (like Alexander Dumas, although we might enjoy many of such products). Sometimes the author goes off tangent in his rush to produce more, still his talent shows quite often, like a sun prying the clouds of popular books, with his imaginative style: "A sharp perfume arose, like coffee struck by lightning." (Deep Eddy) // "A beam crossed the horizon like the finger of God, smiting everything in its path. The sky and earth were thick with flying creatures, buzzing, tumbling, sculling." (Taklamakan).
As Sterling himself explains he loves neologism (creating new words) whose meaning can be guessed by readers, and it really adds to the exotic magic of the SF setting.
I originally ordered this collection (Kindle edition) to read the awarded long-short story "Taklamakan": Reading it could be a joy for all SF fans despite its inconsistencies in tempo (e.g. slow pace beginning and a fast pace ending) and I think it encapsulates the core of this collection with its up and down merit ... The theme can be found in many contemporary stories ...

RIJU GANGULY
5.0 out of 5 stars Highly entertaining fantasy in sci-fi clothing
Reviewed in the United States on September 22, 2011
Verified Purchase
Bruce Sterling, one of the best practitioners of science fiction and every kind of writing that can be presented using the tropes of sci-fi, i.e. fantasy, finally allows us to get a glimpse of his entire range of literary creativity. The stories are unlike most of the contemporary science fiction that fill up the extremely boring volumes edited by gardner Dozois, or some of the other pretenders. They are fresh, fast, driven equally by plot & characters, and very tightly told. Sterling gives too hoots about propagation of politically correct themes through fiction, and concentrates on creating stuff that you are bound to remember as "one hell of a story". The contents of this massive collection are: -

Part I: The Sharper/Mechanist Stories

I can try to list some of my favourties among favourites, but that would not be very good for you, the prospective reader. These are wonderful stories, and if you feel like reading them, after you have read this incompetent review, my work here would be done. Highly recommended.

Richard A. Smith
3.0 out of 5 stars Disappointed
Reviewed in the United States on February 19, 2018
Verified Purchase
Not enough stories about the Shaper/Mechanist universe. The other stories were mediocre.
Read more
Helpful
Comment Report abuse

W Boudville
HALL OF FAMEVINE VOICE
4.0 out of 5 stars good synopsis of Sterling's works
Reviewed in the United States on February 24, 2008
Bruce Sterling fans will find nothing new here, sadly. But the selection of his best works will be a pleasant reread. While newcomers to Sterling's works can get an excellent synopsis of why he is so highly regarded. The stories in this book originally appeared in sundry magazines, scattered over 20 or so years. The diversity of topics speaks to a versatile writing ability.

As to what is be the best story, this might not be a useful question. Readers' tastes will vary widely enough to make difficult any sort of consensus judgment. My personal favourite would be the Dinner in Audoghast, for its piognant evocation of a lost culture. It also differs strongly from the cyberpunk flavoured tales for which Sterling is renowned.
Read more
5 people found this helpful
Helpful
Comment Report abuse
See all reviews from the United States