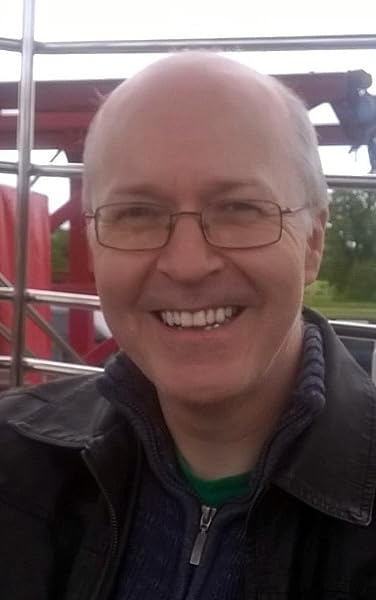 Michael Carroll lives in Ireland.
Start reading on your Kindle in under a minute.

4.7 out of 5 stars
4.7 out of 5
30 customer ratings
How does Amazon calculate star ratings?
Amazon calculates a product’s star ratings based on a machine learned model instead of a raw data average. The model takes into account factors including the age of a rating, whether the ratings are from verified purchasers, and factors that establish reviewer trustworthiness.
Top reviews

Bethel999
5.0 out of 5 stars Great for a reluctant reader
Reviewed in the United States on June 29, 2020
Verified Purchase
My teen nephew is a reluctant reader, but he loves these books.
Read more
Helpful
Comment Report abuse

Stanislav Stach
5.0 out of 5 stars Awesome story
Reviewed in the United States on June 19, 2016
Verified Purchase
Another awesome entry in the series. While young adult books are a dime a dozen these days only a few of them are truly interesting and fun and the superhuman series is one of them. I strongly recommend the series to anyone who enjoys young adult fiction with a strong plot fantastic developed characters and that's just a rollicking good time!
Read more
Helpful
Comment Report abuse

Laquan atwater
5.0 out of 5 stars Greatest Superhero saga EVER!!!!
Reviewed in the United States on February 12, 2012
Verified Purchase
i fell in love with super human because it was a well-crafted book with characters i could read about and enjoy Ascension completely blows it out of the water. it takes everything i loved abouth the first book and just adds to it. the one thing i really love is the fact that the story's climax has a character have to make one of the toughest choices in superhero stories where does the greater good become worth losing the things that you want most. I would and have reccommended this book to everyone i could
Read more
Helpful
Comment Report abuse

Family Bliss
5.0 out of 5 stars Awesome
Reviewed in the United States on June 30, 2013
Verified Purchase
Amazing sequel. It got kind of confusing but by in the end, it worked out. Recommend to those who read book one. Awesome book.
Read more
Helpful
Comment Report abuse

Steven McNeeley
5.0 out of 5 stars Amazing!
Reviewed in the United States on March 12, 2013
Verified Purchase
I loved the characters and how they deal with the situation they are in, the conclusion is also really awesome.
Read more
Helpful
Comment Report abuse

YviG
4.0 out of 5 stars Son's Book Collection
Reviewed in the United States on February 7, 2012
Verified Purchase
My 11-year old son loves these series of book and read this one in a matter of just a few days.
Read more
Helpful
Comment Report abuse

Laura Mazza
5.0 out of 5 stars action packed at every page
Reviewed in the United States on December 30, 2013
Verified Purchase
I was astounded at how I couldn't put my kindle down! Every page was intense and fun and made you want to know more! I would recommend this book to anyone that is intrigued by action and fun.
Read more
Helpful
Comment Report abuse
See all reviews from the United States

Paul Tomlinson
5.0 out of 5 stars Remember How Good the Future Used to Be?
Reviewed in the United Kingdom on July 19, 2016
Verified Purchase
The Ascension is a direct sequel to the author's novel Super Human, picking up the action with barely a pause.

Having set-up the characters and their world already, Michael Carroll keeps things fresh and exciting by having he teenage superheroes transported into an alternate version of their own world. Most things look the same, but certain things are disturbingly different.

How did they end up in this version of reality? And more importantly, can they ever get back home? In the meantime, they have to learn about, and adapt to, this strange new world.

The United States of America is being governed by a ruthless dictator, 'the Chancellor.' It has closed its borders and built up walls to 'protect' its people. Meanwhile, the rest of the world have united in fear of what the dictator may do next in his pursuit of power. The only people in the USA who dare oppose the Chancellor are a group of underground rebels lead by the enigmatic 'Daedalus.'

Paragon, Lance McKendrick and the teen superheroes form an unlikely alliance with the superhuman Brawn - imagine a blue, teenage Incredible Hulk with a sense of humour - and others who may (or may not) be the 'good' versions of supervillains from their own timeline.

Parallel timelines and mirror-versions of characters make this all sound much more complicated that it really is. It is a tale of superheroes versus supervillains, with both the fate of the world, and a chance to return to their own version of reality, at state for the heroes.

Author Michael Carroll has fun creating a dystopian version of America that has us willing the heroes on in their attempts to restore things to normality. Five years ago, when this was originally published, having a huge wall along the border between the USA and Mexico was a tongue-in-cheek reference: in 2016 it doesn't seem quite so far-fetched!

If you're familiar with this world of superheroes, you'll enjoy seeing this dark mirrored version. If you haven't encountered Michael Carroll's work before, pick up Super Human before this one - it's a fantastic read, and the two books together make up one of the best stories in the genre.

I've been careful not to reveal any of the twists and surprises in this story - are there are plenty of them - but I will say that the climactic battle in the villain's lair above a Louisiana swamp is worthy of any James Bond movie.

Underlying this, and the previous books, are hints of a mystery that - presumably - we'll learn more about in later books in the series. Namely, the nature of the mysterious blue energy that seems to cause the mutation that makes humans into super humans. I'm looking forward to finding out more about that.

In the meantime, I'm off to spend more time with the twelve-foot blue superhuman, Brawn, in the next novel in the series, Stronger.

kim johnson
5.0 out of 5 stars Five Stars
Reviewed in the United Kingdom on April 20, 2015
Verified Purchase
spot on
Read more
Helpful
Sending feedback...
Thank you for your feedback.
Sorry, we failed to record your vote. Please try again
Report abuse