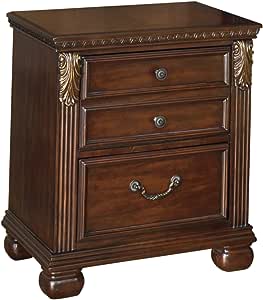 Save with Used - Like New
$193.80
FREE delivery: Monday, April 26
Ships from: Amazon
Sold by: Amazon Warehouse

Visit the Signature Design by Ashley Store
4.6 out of 5 stars 643 ratings
Available at a lower price from other sellers that may not offer free Prime shipping.

With the fluted pilasters beautifully adorned with leaf form corbels and cast foliage filigree bathed in a warm metallic color finish scrolling across the bed and mirror, the rich elegant design of the “Leahlyn” bedroom collection flawless captures the true essence of Old World styled furniture. Keep leather furniture out of direct sunlight and at least two feet from heat sources to avoid fading and cracking.

4.6 out of 5 stars
4.6 out of 5
643 global ratings
How are ratings calculated?
To calculate the overall star rating and percentage breakdown by star, we don’t use a simple average. Instead, our system considers things like how recent a review is and if the reviewer bought the item on Amazon. It also analyzes reviews to verify trustworthiness.

Evelyn Mendoza
1.0 out of 5 stars very upset with this
Reviewed in the United States on August 3, 2018
Style: GabriellaPattern Name: NightstandVerified Purchase
This is the worst garbage that amazon can sell. Order two equal and both are totally damaged. Do not invest your money in that better order directly from the Ashley furniture website.
Read more

1.0 out of 5 stars very upset with this
By Evelyn Mendoza on August 3, 2018
This is the worst garbage that amazon can sell. Order two equal and both are totally damaged. Do not invest your money in that better order directly from the Ashley furniture website.
Images in this review

Bob Hargrove
5.0 out of 5 stars Feet In Your Drawers
Reviewed in the United States on July 31, 2016
Verified Purchase
This was exactly what we wanted. It arrived within a week. Although we bought two and the second was delivered the day after the first. It was packaged like it contained the Ark of the Covenant. It took about 20 minutes to extract it from the box but it was in pristine condition. The only assembly was attaching the feet which was simple and easy, with the included bolts and allen wrench. You'll find the feet in the bottom drawer of the nightstand.
The only downside to this purchase was the constant requests for a review. So. . . I finally gave in and wrote one. Good luck to all. Peace out.

Marlyn R.
5.0 out of 5 stars Beautiful! Well-made QUALITY ( heavy) night stands.
Reviewed in the United States on June 2, 2018
Style: LeahlynPattern Name: NightstandVerified Purchase
Absolutely beautiful! We wanted new nightstands to match a 50 yr old cherry bedroom set and these were perfect! They are quite heavy, so we used a padded two-wheeler to get them up the stairs. The drawers ae deep and slide like a whisper. The only problem was getting them safely out of the box as there is NO room for error when cutting the cardboard. One got a small scratch from this, but I covered it up with a scratch stick & with the new Simhomsen Vintage Gold Burgundy Embroidered Lace Table Runner And Dresser Scarves I'd found on Amazon not only is the scratch hidden the whole room looks great! Those scarves are superbly made & add exactly the right amout of color to break up all the solid cherry.
Simhomsen Vintage Gold Burgundy Lace Table Runner And Dresser Scarves Embroidered Rectangle 16 By 48 Inch

AmznUser181921
5.0 out of 5 stars Great Nightstand for the Price
Reviewed in the United States on March 6, 2018
Style: LeahlynPattern Name: NightstandVerified Purchase
These look much more expensive than they actually are! I ordered two and neither one had immediately noticeable damage. I love the wood color and design on the top and the detail work along the edges. They have a good weight to them. I could probably lift one, but my husband carried them in and put them in the bedroom. It’s also a great height, despite our tall bed. I’m very happy with this purchase.
Read more

5.0 out of 5 stars Great Nightstand for the Price
By AmznUser181921 on March 6, 2018
These look much more expensive than they actually are! I ordered two and neither one had immediately noticeable damage. I love the wood color and design on the top and the detail work along the edges. They have a good weight to them. I could probably lift one, but my husband carried them in and put them in the bedroom. It’s also a great height, despite our tall bed. I’m very happy with this purchase.
Images in this review

Christina O.
2.0 out of 5 stars Horrible odor-made me sick
Reviewed in the United States on February 5, 2021
Style: LeahlynPattern Name: NightstandVerified Purchase
We put it in my room and filled the drawers. Upon opening the top drawer I smelled a strong chemical-like odor. I thought it would be o.k. to just leave the drawers shut and open a window a bit. I could still smell it. I began to get dizzy, my eyes were bothering me, I began to cough, got a severe headache and got a sore throat. I read that (now I must say I am not aware of the chemicals used in this line of furniture) but one possible is Formaldehyde. Formaldehyde is a colorless and flammable gas with a strong smell. It is released into the air from some engineered wood furniture products.
The advise I given by a medical professional-take the furniture out of the house and air it out completely. Open windows in the house to get rid of the off-gassing by any chemical. I think the companies should have to list the chemicals used.

Sam07901
5.0 out of 5 stars As picture, very nice piece.
Reviewed in the United States on January 28, 2018
Style: LeahlynPattern Name: NightstandVerified Purchase
Received item quickly. I have to say packed extremely well, lots of very difficult cardboard inserts, foam packaging, as well as coverage of drawer pulls/handles. Simple to attach feet, which was packed inside the bottom drawer, taped inside so they didn't shift during shipping. I only found two flaws on the cabinet, one on drawer and one on bottom trim which can be easily covered with a furniture pen from any hardware store. It is the companion piece to the dresser I purchased from a local furniture retailer, which you also have but the price on the dresser was about $20 more so I did save there..They also had the nightstand but was about $50 higher so I'm very glad I found this one at Amazon. Beautiful finish, feels sturdy and also came with levelers to place underneath feet in case the piece is placed on an unlevel surface. Some hardwood floor are not always perfectly level so this was an unexpected perk. So far, very happy with purchase.
Read more
9 people found this helpful
Helpful
Report abuse

William I. Gordon
3.0 out of 5 stars Nice Nighstand, One Was Defective
Reviewed in the United States on March 12, 2021
Style: LeahlynPattern Name: NightstandVerified Purchase
It's a great nightstand, and a great value for the money. I, too, wish the top two drawer was actually two drawers, but beyond that, it's sturdy, and of sufficient quality for this price point. It looks very good, and matches the antique-style bed we recently purchased. And it did arrive without damage and well-packed. As others have said, it is nearly impossible to unpack without destroying the box... which did become a problem for me. I had ordered two. The only thing you have to do, assembly-wise, is bolt on the feet. On one of my two units, however, the triangular piece of wood on one of the bottom corners had been installed upside down. Thus, there was no dowel-hole (I could feel the dowel hole on top, which is how I knew it had been installed upside down), and thus the last foot could not be installed. Amazon was ready to send me a replacement, but my wife decided she didn't want one for her side, after all, so it just became a return. The only way to return it, however, was to tape back together the original box (I had only cut it straight down one corner), which was a bit of a pain, but I did it and I was refunded. So, Ashley should work on it's quality control... but beyond that, it is a nice piece for the price.
Read more
Helpful
Report abuse

NorthernGal
5.0 out of 5 stars Lovely piece of furniture-might have to deal with off-gassing
Reviewed in the United States on July 28, 2017
Style: LeahlynPattern Name: NightstandVerified Purchase
This is a lovely piece of furniture. It is exactly as described, sturdy and nice deep drawers. I must add that after taking it out of the secure packaging, we noticed the horrible off-gas smell an hour after placing it in the bedroom. Since an off-gas oily chemical smell can cause headaches and other problems we had to leave the nightstand out on our deck for 7 days in humid breezy weather for the smell to dissipate. Currently we are able to use the nightstand and are pleased with it.
Read more
11 people found this helpful
Helpful
Report abuse
See all reviews

PLW
5.0 out of 5 stars Beautiful Night Stand
Reviewed in Canada on April 3, 2021
Style: LeahlynPattern Name: NightstandVerified Purchase
The picture does not do this justice...it is absolutely beautiful...love it the drawers are nice and deep perfect size...no complaints here😁
Read more
Report abuse
See all reviews
Pages with related products. See and discover other items: accent tables by ashley, antiqued furniture, ashley bedroom furniture, ashley furniture bed, ashley signature furniture, signature designs by ashley
Back to top
Get to Know Us
Make Money with Us
Amazon Payment Products
Let Us Help You
EnglishChoose a language for shopping. United StatesChoose a country/region for shopping.
© 1996-2021, Amazon.com, Inc. or its affiliates