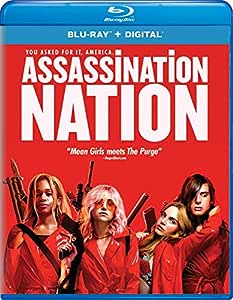 High school senior Lily and her three best friends live in a world of selfies, emojis, snaps and sexts. But when their town of Salem is besieged by a massive data hack, resulting in half the citizens' private info spewed into the public view, the community descends into anarchy. Lily is targeted after being falsely blamed for the hack—and bands together with her friends to survive a long, blood-soaked night.

4.0 out of 5 stars
4 out of 5
197 customer ratings
How does Amazon calculate star ratings?
Amazon calculates a product’s star ratings based on a machine learned model instead of a raw data average. The model takes into account factors including the age of a rating, whether the ratings are from verified purchasers, and factors that establish reviewer trustworthiness.
Top reviews

Robert G
2.0 out of 5 stars Lots of style and little substance. But not for a lack of trying.
Reviewed in the United States on December 22, 2018
Verified Purchase
It's essentially a series of cool shots and references to things the filmmaker wanted to put into a movie without making the connective tissue. Characters are weak puppets for monologues by the writer and ends in a 3rd act that doesn't feel at all deserved.

The film takes itself way too seriously to have fun with and plays too loose with the rules of the world to take seriously. It tries way too hard to be edgy and subversive to the point that it gives a "trigger warning" at the beginning to prove how outrageous it is. It might've been at least interesting to see a filmmaker's not fully formed ideas fall out on screen but it ends with a cringey scene of self importance that it makes it too embarrassing.

The best description of the film is "wokesploitation". Just like most exploitation films, they're cheap, low quality, and have very little to actually offer.

TheGhoststarOriginaL
4.0 out of 5 stars THIS FILM IS CRAY-CRAY,... TWISTED WITH ANOTHER CRAY,... SPLASHED IN SEX !!!
Reviewed in the United States on April 30, 2020
Verified Purchase
This film is OUTRAGEOUS !!!
Literately Out Rage Us !!! Let that
pun sink in,... you that have seen the
film,... will get it !!! The I-Gen version of
SCREAM, where technology is the ghoul !!!
Went into the film blank,... was totally blown away
with how the films relevant depth played out as art !!!
Fast paced, with plenty of disturbing moments,... thrills &
action, to satisfy your high-school action-horror addictions !!!
Loved the film up until the last 30 minutes,... deduct 2 stars for
rushed silly ending,... Add one star for the stone-cold baton-girl and the
( smells like teen spirit ) closing credit scene,... to make a solid FUN 4 STAR FILM !!!
at $4.99 this was a PERFECT PURCHASE, for your modern-day teen-screams collections !!!

M. Foster
3.0 out of 5 stars Is Assassination Nation the Digitalization Civilization's new Emancipation Proclamation? Um...
Reviewed in the United States on January 5, 2019
Verified Purchase
As laid out by Lily at the beginning of the film, Assassination Nation boasts a generous hodgepodge of triggers. Nation is dripping with shocking (often fun or funny) blood and gore, scandalous sexuality, brutal assault and victimization, exploitation and marginalization, all drowning in an ocean of addictions.

Nation uses the familiar “hot girl” clique flick formula (cue the alt pop song of the moment as 4 sexpot teenagers swagger lockstep in slow-motion, turning heads in an untouchable parade down the school hallways). The familiar formula takes place in their hometown Salem, which houses all the current issues teenagers are struggling with today as they fight against the antagonist grownups and their obsolete rules.

No spoilers— secrets and lies are exposed and exploited during an extensive hack that begins to take down large sections of the residents at a time. At first, events play out much as they do in real life, haters hate, trolls troll, and the righteously indignant assemble to picket and shout their mob mentality. Chaos and insanity ensue, and the town descends into violent anarchy.

There is a distracting overstated style to this film that doesn’t quite capture the bot ridden content sharing communication du jour it is attempting to depict. Not quite. Also, the film tries to make a poignant statement about the audiences of all media being mechanically overexposed to gratuitous tantalizing taboos, but it does so by mechanically overexposing the film’s audience to gratuitous tantalizing taboos. We are too smart to need s*** spelled out for us. Like, naming the town Salem? Really? Am I supposed to be typing this review like, “…and the town was called SALEM! You know, like the witch hunt place! Mind blown guys!!!!” No.

To be fair, I liked it. it's a fun and twisty ride of horror and delight. And, it does make some interesting statements on censorship, identity, and depersonalization. As Lily unabashedly explains to her school principal, kids today spend most of their time emulating the shopped, clipped, and staged drama of a sexualized and cruel digital unreality— all the while in a spotlight of their own, often twisted and exploited by a faceless audience rising at an exponential rate. IN SALEM, DUDE!!!
Read more
2 people found this helpful
Helpful
Comment Report abuse

Olgier
1.0 out of 5 stars Serious waste of time. Don't waste your money.
Reviewed in the United States on December 23, 2018
Verified Purchase
Better movies on the Sci-Fi channel. Probably one of the worst movies I have seen in a long time, and I have seen many.
No one that was watching this movie liked it, male or female. It was so bad we turned it off and decided to play cards instead. This is not even a B movie, more like a D. I rented this due to the number of 4 star reviews, big mistake.
Read more
5 people found this helpful
Helpful
Comment Report abuse

Whit Elize
5.0 out of 5 stars Kept Me In It!
Reviewed in the United States on December 31, 2018
Verified Purchase
I wish I had seen this film in theatres! This is one of those films you have close yourself off to your surroundings and soak yourself in it.
Anything that pokes at societal views today and how we shouldn't be so surprised that people react this way still has my vote!
The adult hacks are seen as easy prey and the likely candidates for the town to turn against without any explanation or sympathy, just words of judgement and fear that the person they thought they knew turned out not to share every detail of their lives with the general public!

It shows how a lot of teenagers today will put their entire "lives" online with the mentality that no one will bother with them yet they secretly hope they do. Then, when all eyes are on them, it's a different story.
Read more
3 people found this helpful
Helpful
Comment Report abuse

Joel Ogoy Ortega
3.0 out of 5 stars A WARNING FOR THE PEOPLE WHO LOVES INTERNET
Reviewed in the United States on February 28, 2019
Verified Purchase
This movie is actually a great movie to watch for the people who loves internet. Like a warning, that everything you do, search, watch, buy, visit and send in the internet can be hacked and leaked all over the world. Since the movie is a teen oriented film, of course the movie was kind of like a vlog or a music video with all the editing choices for the film. Like some split screens and bubble conversations. The movie doesn't really have likable characters because the movie gave you something to hate about them. But I actually like Bella Thorne's character not because she's a good person (she's like Regina George from Mean Girls) but I like her because she loves herself so much that it became very funny whenever she brags about her self there's this line where she said someone subscribed to her Amazon Account and buys everything in her Wishlist.
Read more
Helpful
Comment Report abuse

Avi Cohen
5.0 out of 5 stars Brilliant Film
Reviewed in the United States on December 18, 2018
Verified Purchase
This is the movie we needed in 2018. Absolute stunner.
Read more
7 people found this helpful
Helpful
Comment Report abuse
See all reviews from the United States

Craig
5.0 out of 5 stars A must watch movie!
Reviewed in the United Kingdom on December 1, 2019
Verified Purchase
A satirical take of our social media obessed society we live in Assination Nation takes a dark look at what if all of our online secrets were leaked and it does it brilliantly coming off as a much darker and better Purge movie than any of the actual Purge movies are. This is a must watch.
Read more
Helpful
Sending feedback...
Thank you for your feedback.
Sorry, we failed to record your vote. Please try again
Report abuse

Trek Fan..
4.0 out of 5 stars Assassination Nation is High on itself.
Reviewed in Canada on January 19, 2019
Verified Purchase
What you see is what you get with this movie, I’ll tell you one thing. it’s bombastically shallow.
the pervasive language to the movie is enough to turn anyone away. that is a given.
an then to compound it with more violence, to the extreme. doesn't seem to take itself serious enough.
but one thing is certain for this movie is, it sure don’t stray far from the truth. in some aspects of life.
like snap chat, selfies, sexts, emojis, the stuff that seem to make the world move faster than it can handle.
it is a serious social movie, but way over the top. but the theater quality sound is impeccable.
Assassination Nation is High on itself.
Widescreen 2.35:1
Runtime 107 Min.
English 5.1 DTS-HD Master.
Read more
2 people found this helpful
Helpful
Sending feedback...
Thank you for your feedback.
Sorry, we failed to record your vote. Please try again
Report abuse