Secure transaction
Your transaction is secure
We work hard to protect your security and privacy. Our payment security system encrypts your information during transmission. We don’t share your credit card details with third-party sellers, and we don’t sell your information to others. Learn more 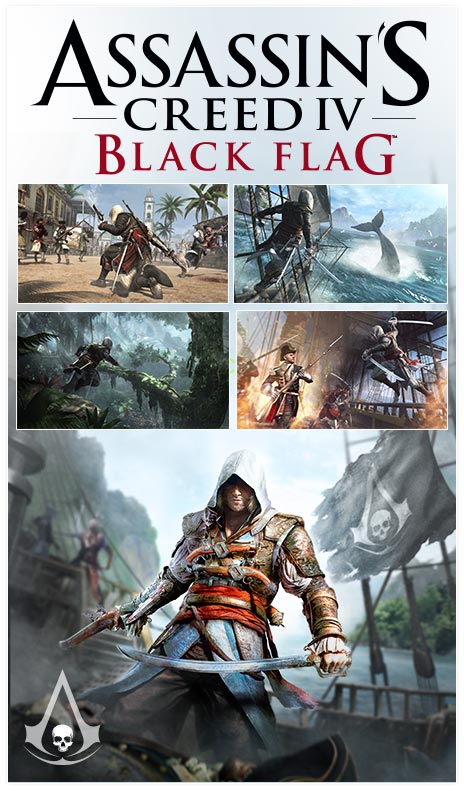 It is 1715. Pirates rule the Caribbean and have established a lawless pirate republic. Among these outlaws is a fearsome young captain named Edward Kenway. His exploits earn the respect of pirate legends like Blackbeard, but draw him into an ancient war that may destroy everything the pirates have built.

A BRASH REBEL ASSASSIN
Become Edward Kenway, a charismatic yet brutal pirate captain, trained by Assassins. Edward can effortlessly switch between the Hidden Blade of the Assassin's Order and all new weaponry including four flintlock pistols and dual cutlass swords.

EXPLORE AN OPEN WORLD FILLED WITH OPPORTUNITIES
Discover the most diverse Assassin's Creed® world ever created. From Kingston to Nassau, explore 50 unique locations where you can live the life of a pirate including:

BECOME THE MOST FEARED PIRATE IN THE CARIBBEAN
Command your ship, the Jackdaw, and strike fear in all who see her. Plunder and pillage to upgrade the Jackdaw with ammunition and equipment needed to fight off enemy ships. The ship's improvements are critical to Edward's progression through the game. Attack and seamlessly board massive galleons, recruit sailors to join your crew and embark on an epic and infamous adventure.

EXPERIENCE THE GRITTY REALITY BEHIND THE PIRATE FANTASY
Stand amongst legendary names such as Blackbeard and Benjamin Hornigold, as you establish a lawless Republic in the Bahamas and relive the truly explosive events that defined the Golden Age of Pirates.

MULTIPLAYER EXPERIENCE
Play with your friends in the ruthless and critically acclaimed multiplayer experience. Choose from an eclectic cast of characters from the Golden Age of Pirates and fight to the death in exotic locations.

4.3 out of 5 stars
4.3 out of 5
282 global ratings
How are ratings calculated?
To calculate the overall star rating and percentage breakdown by star, we don’t use a simple average. Instead, our system considers things like how recent a review is and if the reviewer bought the item on Amazon. It also analyzes reviews to verify trustworthiness.

Terri Geer
5.0 out of 5 stars Outside of the ACII and ACBrotherhood, this is the game that I like most.
Reviewed in the United States on February 11, 2016
Platform: PCEdition: StandardVerified Purchase
I've been a gamer since the mid to late 1980's. Mostly role playing games.

My Grandson introduced me to the Assassin's Creed games with ACII. I more than liked it and have bought most of the others in the series.

Outside of the ACII and ACBrotherhood, this is the game that I like most. You have a good mixture of both land and sea adventures. And once Edward starts taking over ships there is a game for the Android that lets you manage the ships and the shipping without having to go back into the ships cabin.

The cut scenes are interesting, some are heartbreaking, and contribute to the story.

I didn't like the parts that are supposed to be in the current time nearly as much.

The bad, terrible in fact, part of this series is that the programmers keep upping the system requirements with each game. Since I am retired, I am on a fixed income and cannot afford to upgrade my laptop for them. Which means that I will not be buying any game passed AC Syndicate. My laptop is very laggy with that, and that's with everything turned down as low as they can go. :-(

Bryan
5.0 out of 5 stars This one gets it right !
Reviewed in the United States on July 6, 2015
Platform: PCEdition: StandardVerified Purchase
A very nicely balanced game which goes beyond the previous titles by adding elements that add interesting diversity in game play.

The previous titles had such incredibly rendered versions of historical cities and even opportunities for a bit of education while you play. And while I did enjoy playing them for a time, they got a bit (dare I say it) boring over time. While initially interesting, the missions became too similar. And no matter how historically accurate and interesting the building, climbing up my 30th ancient edifice only to dive into yet another cart of hay from an improbable height and after assassinating my 99th bad guy from the safety of said concealment, I wanted to move on.

Black Flag adds a lot of interesting elements that eliminate the boredom factor. Sailing around the world engaging in naval battles is an entirely new and welcome addition. And if and when this ever becomes a bit dull, there are plenty of cities, towns and jungle settings to explore and, yep, people to assassinate. Combat is much improved as well. While I really enjoy the stealth aspect of the game, it's nice to occasionally attack adversaries head on. In previous games you'd quickly become overwhelmed with more than a few and combat was a bit difficult to master. This game stays true to its swashbuckling pirate nature by allowing you to run into a hoard of enemy sailors and hold your own while waiting for the rest of your crew to come to your aid. But you will become overwhelmed eventually (as you should) but you can choose stealth or a more direct assault as it fits the situation. In addition, there are other entirely new aspects to the game like crafting that actually means something, hunting, and underwater expeditions. And the ocean feels alive! The occasional storm pops up along with devastating water spouts (which incidentally scare the bejeesus out of me :) and tsunamis which are pretty frightening themselves. And the story itself is entertaining and actually seems to go somewhere.

There are a few minuses that don't detract significantly from the game - Examples include the inevitable stalk / listen in on a conversation missions (annoying as all heck) and those times when you get pulled out of the animus back into the real world for a tack-on story that you're absolutely not interested in. (Is it just me that would rather stay in the assassin world and never go back to the real world? Is the entire idea of the animus kind of a pointless complexity? Yeah, maybe it's just me.) Fortunately, though, you do get to stay within the story for the vast majority of the time in this one.

Brian Bosboom
3.0 out of 5 stars Ahoy, Matey! No plunder 'ere!
Reviewed in the United States on February 25, 2015
Platform: PCEdition: StandardVerified Purchase
This game is aging, likely no one will read this. But I will write this review for fun. I have never played any other games in the A.C. franchise so I have no background or attachment with the series. I picked this up because it was released around the time I built a performance gaming rig and therefore 'up-to-date'. It also had some favorable reviews, and for this seasoned gamer, warranted a purchase.

I admittedly never spent too much time with it. Even around the time it was released it wasn't particularly impressive to me. The game may chug on your system but that's not because it's state of the art, it's because the programming is poor. It was likely rushed into final release, clearly it needed more time.

The engine is decent enough. Especially by today's standards, the environments look a bit... "paper-y". Nothing really grabs your attention but the water, some lighting effects, and the occasional post-processing. As for the game itself: the story is almost painfully dull. Even the bomb drop in plot seems a bit expected. That being said, you can expect a twist in the game, but it is not M. Night Shamylan status.

Being a gamer who has lived through the era of SNES, N64, PS2... a gamer of almost twenty years, I still play games that are old and outdated. That being said, I do not think I will be picking up A.C. Black Flag in five years, ten years, or even a year or two. Compared to addictive online games offered by other developers, there's really not much reason to play this one unless you are attached to the series. It plays like the new batman games--that is, it is a stylish button masher that is simplistic, but coated with enough shine to almost make you forget that fact.

Within the next year, this game will be almost completely forgotten to all but utter gaming enthusiasts who have a thing for pirates and pirating games, no pun intended. Technologically it will be surpassed about four fold by many other games when Direct X 12 hits later in 2015. As far as its mechanics go: they are very simple and deceptively complex. Other than the fact that this game is based around piracy, nothing stands out to be honest. Forgettable graphics/production, forgettable gameplay... meh.
Read more
3 people found this helpful
Helpful
Report abuse
See all reviews

Mark Fisher
2.0 out of 5 stars OK but.
Reviewed in Canada on January 2, 2020
Platform: PCEdition: StandardVerified Purchase
OK but I wish there was a cheat engine built in. The game is to confusing and hard to play with any consistency.
Read more
Report abuse

Pierre-Luc Granger
5.0 out of 5 stars Seller recommended, Many thanks!
Reviewed in Canada on September 22, 2018
Platform: PCEdition: StandardVerified Purchase
Many thanks! Item in perfect conditions. Fast shipping. A+++++
Read more
Report abuse

G
5.0 out of 5 stars Exactly what was expected
Reviewed in Canada on May 10, 2014
Platform: PCEdition: StandardVerified Purchase
It was sent promptly, arrived in good condition, brand new packing, right format/platform and everything. Was exactly as expected. I'm only a little bit into the game itself so far, but it's pretty good.
Read more
Report abuse

Vella
5.0 out of 5 stars Gift for my daughter
Reviewed in Canada on January 2, 2014
Platform: PCEdition: StandardVerified Purchase
My daughter loves this game, just as she did with the previous ones. The graphics are even better than previous ones, yet it seems to run just as smoothly. She would definitely recommend it.
Read more
One person found this helpful
Report abuse

Page 1 of 1 Start overPage 1 of 1
Previous page
Next page
Pages with related products. See and discover other items: fantasy games pc, windows 7 upgrade from vista, pc games to play, pc games windows 7 compatible, pirate items
Back to top
Get to Know Us
Make Money with Us
Amazon Payment Products
Let Us Help You
EnglishChoose a language for shopping. United StatesChoose a country/region for shopping.
© 1996-2021, Amazon.com, Inc. or its affiliates