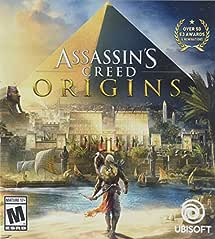 Ancient Egypt & dash : home of colossal pyramids, gilded tombs, tyrannical god-kings, and the origin story of the Assassins. As Cleopatra empire crumbles, the birth of the Assassin's Brotherhood will lead to an extraordinary shift of the world order. Along your journey, the mysteries of Ancient Egypt will be revealed. Assassin Creed Origins uncovers the beginning of the Brotherhood. Fight in epic battles, master a completely reinvented combat system, and explore the entirety of Egypt. With the all-new quest system, complete missions in any order you choose, and follow your own path to greatness.

4.7 out of 5 stars
4.7 out of 5
1,712 global ratings
How are ratings calculated?
To calculate the overall star rating and percentage breakdown by star, we don’t use a simple average. Instead, our system considers things like how recent a review is and if the reviewer bought the item on Amazon. It also analyzes reviews to verify trustworthiness.

D. K. Malone
5.0 out of 5 stars Was it worth the wait? HELL @#$%ing YES
Reviewed in the United States on October 30, 2017
Platform: PlayStation 4Edition: StandardVerified Purchase
This is it, folks. Ever since AC2 came out, it's been the high water mark for the franchise. The games that came in its wake have all been measured against it, they've all been based on its model in various fundamental ways. Some strayed further than others, some surpassed it in one way or another, but all were tethered to it... which wasn't such a bad thing, because AC2 was a great model. I remember how hopeful I was that AC3 would usher in the next phase of evolution, but ultimately it was still just a different version of AC2*, with a few changes implemented seemingly for their own sake (not to mention riddled with bugs.) At last, we finally have reached the next step. AC Origins is as different from the preceding ACs as AC2 was different from AC1.

After playing for over two days straight, I'm only about halfway through Origins, (EDIT 2 weeks later: Ha! I wasn't even a quarter of the way through yet) so I can't give a definitive bottom line assessment. But I can say that it would have to hit me with a very very radical midway shift if it intends to disappoint me from here on out. Bayek is a great character, more than worthy of the franchise. Based on previews I was thinking he was more like Altair and Connor... stoic, cold and humorless. Not so, his “primitive” old world speech patterns belie his warm personality, wit and heart. He won me over quickly. In one scene an old friend who hasn't seen him in a few years asks him “So, how's your wife?” Bayek answers something like “Why don't you ask my foot?” Then they laugh and go get wasted drinking ancient Egyptian beer out of bowls.

The changes to the controls can take some getting used to. Especially when it comes to combat, it's more demanding than previous ACs. There is no “automatic” counterattack this time around, which was a staple of AC combat until now. Enemies can be extremely pesky. Normal difficulty is relatively forgiving in terms of how much damage you can absorb... as long as you aren't taking on enemies at a considerably higher level than you. And BTW, I've been hearing a lot of people claim that the level system is new to AC, introduced for the first time by Origins. It really underlines how many people either didn't play Unity or Syndicate, or played them without paying attention or something... because those two games also used pretty much the same level system. Same for upgrading equipment, Origins is not the first AC to do that... Unity and Syndicate did it already, ya big dummies.

One of the most radical franchise changes is Eagle Vision... that is to say, the absence of it. You do have a handy radar ping type ability that marks treasures and other pick-ups in the local vicinity. But for spotting enemies, you have to rely on a more literal form of “eagle vision.” Wherever you go, you're constantly followed in the sky by your pet eagle Senu, and at any time (unless you're underground) you can see through her eyes and use this to mark enemies and other important goals to clear in a given area. Pretty similar to the drone in Watch Dogs 2, which I loved using. (I've heard it's also similar to something in Far Cry Primal which I haven't played.)

I don't even know where to begin when describing Origins' open world. It's glorious. Ever since AC2 and especially Brotherhood, I've yearned for AC to take place in ancient Rome. Ancient Egypt circa 50 BC is close enough. This was a time when the Romans and the Greeks (among others) were burrowed into Egypt like ticks, so you get three tasty historic flavors for the price of one. The world is vast, varied, and there's a good balance between pockets of dense population, wild hunting grounds, and desolate badlands. I've only uncovered about 1/3 of the map so far, but I feel like I've already covered way more ground than Brotherhood, Revelations, Unity and Syndicate combined. I was always sorry to see AC dial back from the collections of iconic cities in AC1 and AC2 in favor of merely one huge city. Let's just say I certainly have no problem with Origins in that regard.

The story and characters fit right in with classic AC. I'm not sure exactly where it's going, but so far it feels familiar, in a good way. Bayek has good reason to go questing to assassinate his targets. They've got it coming, and it feels good giving it to them.

The “modern day” aspect of the game is back, naturally... it wouldn't be AC without it. So far, in around 20 hours of play, it's only interrupted and pulled me out of the Animus once. I hate to spoil it, but... we finally have a new bona fide replacement for Desmond. An actual character, that you see from 3rd person perspective, who has dialogue and personality, a spunky one at that. Again, not sure where that's going, but so far so good.

Very curious to know what Origins would have been like if they'd released it in Nov 2016 as originally planned. But I'm pretty sure taking the year off was well worth it. AC2 is still my favorite in the franchise and probably always will be at this point, but I simply can't deny that Origins is likely the best AC so far. My only problem with it is that it's keeping me from playing Super Mario Odyssey. =\

* I'm guessing that some might argue that AC3 broke the mold by introducing naval combat, which was then doubled down on by AC4. I would remind them that it was actually Brotherhood that introduced naval combat, via one of the “Da Vinci's war machines” missions. AC3 simply expanded on that, and AC4 then focused on it. It was a gradual build up of something relatively minor when first implemented.

EDIT 11/13/17: I racked up over 110 hours by the time I beat the game. Needless to say I completed every available activity. Then I finally started in on Super Mario Odyssey. About two hours later, I was playing Origins again. I'm about 45 hours into my second play through. Sorry Mario, I promise I'll get back to you someday...

EDIT 3/21/18: The Hidden Ones DLC was pretty good. The Curse of the Pharohs DLC is outstanding. Literally fantastic. I don't want to spoil anything, but several sections of it add a layer of surreality the likes of which I've never seen before, at least not in a game like AC. Top notch DLC.

EDIT 7/18/18: Even after I was well and truly done with Origins months ago, I never did go back to Mario Odyssey... until July 1. I “beat it” (i.e. defeated Bowser for the first time) about a week later, and I now have a little over 600 moons. Awesome game, shame on you Origins for diverting me away from it for so long,
Read more
165 people found this helpful
Helpful
Report abuse

Waffles
5.0 out of 5 stars Wife who hates video games called this “beautiful”
Reviewed in the United States on November 27, 2017
Platform: PS4 Digital CodeEdition: StandardVerified Purchase
UPDATE: Now at 100% completion, I still think this deserves 5 stars for innovation. However, the story arc reached a high point 3/4 way through and then petered out to a rushed and uninspired finish.

Pros:
—Stunning textures, lighting and particle effects. My wife hates that I play video games, but while I was playing the opening sequence of AC Origins she said “wow that’s beautiful” before remembering to storm off in disgust.
—Loading times and frame rate drops are minimal.
—The setting of Ptolemaic/Roman Egypt is reminiscent of the first AC set in the Middle East with several cultures clashing at a key point in history.
—New combat and exploration feel like...Skyrim. That’s mostly a good thing.
—Truly massive open world with dynamic day/night cycle.
—Despite all being “in the desert” areas do manage to feel unique and varied.
—Crafting and especially loot feels more like a traditional RPG.
—Some questlines (“The Crocodile” in particular) are surprisingly memorable and well written.

Cons:
—Plot is adequate, but for the first hour or so you have almost no idea who the main character is or why he needs to kill people. The last handful of missions are also disappointing and seem rushed compared to the rest of the game.
—You progress quickly and gear becomes obsolete VERY fast.
—Still some wonky bugs despite day one patch. Herds of animals occasionally spawn in the sky and immediately plummet to their deaths.
—The new “pulse” loot-finding system (think Dragon Age Inquisiton) feels a bit gamey and makes it almost impossible to miss a hidden chest.

Conclusion: This is up there with Uncharted 4, Witcher 3 and a few others that will define this generation of consoles. Definitately a learning curve here, but AC Origins brings a long overdue revamp of mechanics and breathes new life into the series in a satisfying way.
Read more
37 people found this helpful
Helpful
Report abuse
See all reviews