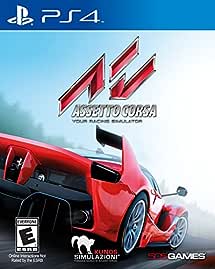 Precision and perfection are at the core of Kunos Simulazioni’s pedigree; first of all in creating software models for numerous motorsports Marques, and now in bringing their ground-breaking racing simulation, Assetto Corsa, to home consoles.

Deservedly positioned as “Your Racing Simulator,” Assetto Corsa ups the simulation stakes with a fanatical focus on pure driving realism, with laser-focused accuracy across every aspect of the game from the meticulous car handling to the laser-measured tracks.

Assetto Corsa features over ninety high-performance vehicles all rendered to an obsessive level of detail, and each with bespoke handling and performance modeling taken from manufacturer’s real-life track data and telemetry.

Using laser scanning technology to deliver the highest level of accuracy possible, Assetto Corsa boats twenty-four track configurations from sixteen legendary circuits, alongside an advanced physics engine built using practical knowledge acquired from the elite of motorsport including features and aspects of real cars, never seen on any other racing simulator such as tyre flat spots, heat cycles including graining and blistering.

A full suite of race modes in Single and Multiplayer are available and customization allows players to personalize their experience by adjusting the handling and race set-up of each and every car in-game to match their personal racing style.

Assetto Corsa has been developed at the Kunos Simulazioni R&D office, located at the Vallelunga international racing circuit outside Rome, allowing the team to develop the game in conjunction with some of the world’s top drivers and racing teams.

4.1 out of 5 stars
4.1 out of 5
200 global ratings
How are ratings calculated?
To calculate the overall star rating and percentage breakdown by star, we don’t use a simple average. Instead, our system considers things like how recent a review is and if the reviewer bought the item on Amazon. It also analyzes reviews to verify trustworthiness.

Travis R.
3.0 out of 5 stars Great Driving, but Very Bare Bones Sim
Reviewed in the United States on July 19, 2017
Platform: PlayStation 4Verified Purchase
First off, this is a Driving SIMULATOR. There is no custom paints, No buying/selling cars, No NOS. This Game is 4 True Racing enthusiast. So Please Ignore any reviews complaining about the lack of those things. Those are stupid ppl who expect every console racer to play and drive like Need 4 Speed. This Game is ment to be played on a wheel n pedal set up. I would not buy this if your a controler user unless your rly good with one and just love motor sport. What assetto gets right is the driving itself, its the most realistic Driving you will get on console. The Force feedback feels great with little adjusting. And each car feels different and unique, as they should. The Online Racing here is very intense with a decent community that for the most drive clean and are respectful. Unfortunately thats where it ends, the lack of content here slaps you in the face as soon as u start it up. Theres 90 cars that are not DLC, but alot of those are just multiple variants on the same car, its missing tons of tracks, and the career mode is literary Heres a Car, heres a track, go drive and shut up. No Raceday Feel, no pace car or Lap, No Pit stops (in career mode only custom events and online can have pits) No Calendar, No Driver Name, No Sponsor or team contracts, No Spotter voice, No Night Racing or Weather effects. The career reminds me of DriveClub. Its a Very Bare Bones Sim. The A.I is very inconsistent, you could choose easy one race and smoke them, then the next they are super fast and aggressive, and its the same 4 the higher difficultys. Also they will almost never pass you unless u just make a huge mistake, but if u are behind them they are very aggressive, but there is a patch coming 4 this that is already live on pc. In Conclusion i would buy this if your looking 2 Race online with the best driving physics currently on PS4 and the online community is pretty healthy. If you want a single player more raceday feel with a more realistic career, but dnt mind **slightly** worse physics then u should get Project Cars. Project Cars also has better visuals IMO, and all those things like night racing and weather. If u are a Console sim Racer Then you should just have both. OR wait 4 Project Cars 2 and GT sport.
Read more
14 people found this helpful
Helpful
Comment Report abuse

Dylan
3.0 out of 5 stars Definitely not the same as PC version
Reviewed in the United States on February 12, 2019
Platform: PlayStation 4Verified Purchase
As a PC Sim racer as well as console Sim racer I was excited to get this as I've had it before on the PC. However I find receiving ps4 version I discovered that it was almost a completely different thing, no longer could you change steering ratios and fine-tune tweaks of extra settings
Read more
2 people found this helpful
Helpful
Comment Report abuse
See all reviews

Page 1 of 1 Start overPage 1 of 1
This shopping feature will continue to load items when the Enter key is pressed. In order to navigate out of this carousel please use your heading shortcut key to navigate to the next or previous heading.
Back
Next
Pages with related products. See and discover other items: fiat model, ferrari model, ps4 multiplayer game, ps4 simulation games, single player game, spa kids