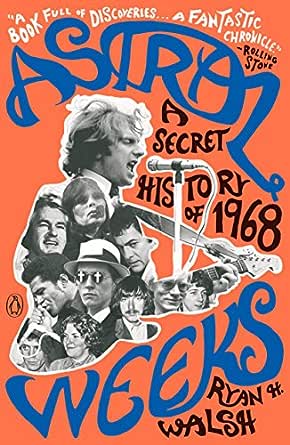 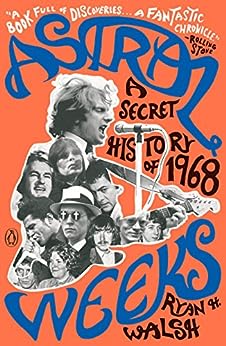 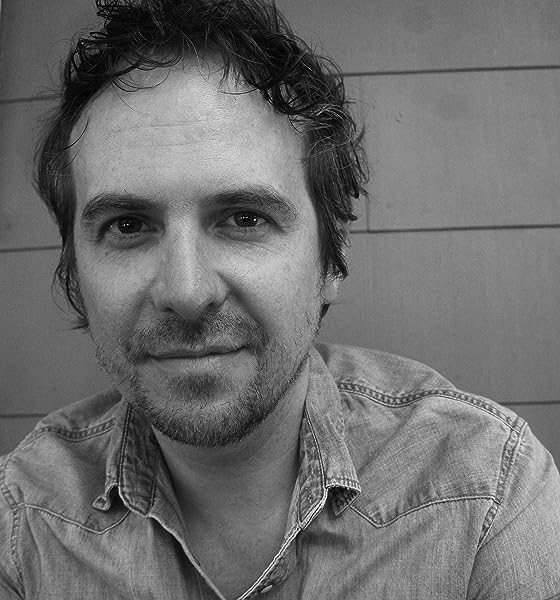 “One of the finest books written about Boston. . . . Walsh weaves the stories of luminaries who had crucial experiences in Boston—Morrison, Lou Reed, Timothy Leary, James Brown—around the forgotten and often astonishing history of the city when it was old, weird, and grimy.”—Boston Magazine

“Astral Weeks unearths the time and place behind the music. . . . A book full of discoveries. . . . A fantastic chronicle.”—Rolling Stone

“Ryan H. Walsh’s new book, Astral Weeks: A Secret History of 1968, takes up Morrison’s sui-generis masterpiece and unearths the largely forgotten context from which it emerged. . . . In documenting the milieu out of which the album came, Walsh also argues for Boston as an underappreciated hub of late-sixties radicalism, artistic invention, and social experimentation. The result is a complex, inquisitive, and satisfying book that illuminates and explicates the origins of Astral Weeks without diminishing the album’s otherworldly aura.”—Jon Michaud, NewYorker.com

“Astral Weeks is a brilliant, beautiful tribute to a long-lost era of free-form radio, communal living, underground newspapers, burgeoning musical scenes in their pristine form before being captured by the ‘star making machinery,’ and the birth of a visionary album by a 22-year-old Irish singer/songwriter that remains terrifying in its untouched beauty. . . . This book is a masterful end result of research, patience, and love for a time and sensibility sorely missing today.”—PopMatters

“Walsh describes Boston as ‘the true birthplace of American hallucinogenic culture.’ By the end of his colorful, highly illuminating history of the city's late-60s freak scene, it’s hard to argue. . . . Astral Weeks is a book worthy of the name.”—Uncut

“A ‘secret history’ of a proud old city caught in the throes of cultural hysteria. . . . Walsh’s book recreates a time and place that attracted an impressive array of characters.”—The San Francisco Chronicle

“The secret history unspools like an endless bar yarn, an almost-impossible tale in which obscure and famous figures are tethered in conspiracy and coincidence. Walsh’s voice is casual, his prose accessible, and his humor occasionally eviscerating. . . . Astral Weeks is another right-on-time reminder of how crucial participation is in keeping art and music alive.”—Jessica Hopper, Bookforum

“The book is rich with details on what was then an incredible fertile time for the arts. . . . Walsh was drawn to write this book because he was so moved, as is anyone with a soul, by what became Morrison’s masterpiece. He honors that art with his own.”—Charles P. Pierce, Esquire

“Walsh’s book recaptures much that might otherwise fade away. . . . The mini-histories embedded throughout are often entertaining.”—The New York Times Book Review

“Walsh does a strong job of dramatizing the interpersonal tensions informing the album’s creation, adding grit and depth to a story often transmitted with a more facile investment in the notion of individual genius. . . . Walsh is a chatty and engaging writer, and his research is impressive. . . . The most compelling reason to read Astral Weeks is not to learn about Van Morrison or his vaunted record. This is a book about the hub of a very weird universe.”—Los Angeles Review of Books

“The story Walsh has unearthed is so mind-boggling, so full of extraordinary detail and coincidence, and strange, now impossible ambitions, that one can only share in his delight at the sheer improbability of it all. . . . Possibly if you were to spend years investigating a crucial period in the life of your city, you would find stories as good and as rich as these, but even then you would have to have an eye as keen as Walsh’s, a nose as sharp, an ear as sensitive and as attuned to the frequency of the times. This is a wonderful book, I think, funny and interesting and completely absorbing, if you have any interest in just about anything this magazine holds dear—art, politics, fun, music, chaos.”—Nick Hornby, The Believer

“A rich evocation of the momentous year when Van Morrison, feeling from the breakup of his R&B band Them, found himself in Boston. . . . The music book of the moment.”—The Philadelphia Inquirer

"You don’t have to be a fan of Van Morrison’s staggeringly unique, near-perfect album to appreciate Walsh’s strange, engaging history of a time and place in America (Boston, 1968), and what it reveals about the forces (political, cultural) altering the fabric of the entire nation. (If you do happen to like Astral Weeks, this book is definitely for you.)"—Jonny Diamond, Lit Hub

“That Walsh has taken on the milieu surrounding a beloved album is impressive—and his holistic approach, encompassing a host of countercultural figures and groups in late-1960s Boston, offers a bold blend of the familiar and the unknown.”—Vol. 1 Brooklyn

“Walsh writes with the enthusiasm of a fan and the precision and depth of an expert. A first-rate book about a piece of music and the time in which it was created.”—Booklist

“An energetic history. . . . A fine-grained and wide-ranging portrait of the album’s gestation. . . and of life in the city’s counterculture in that raucous year. . . . Offers deep insight into the creative process of this mysterious work. . . . The late ‘60s counterculture in New York in San Francisco is a well-known story. What happened in Boston ‘has gone largely unremarked.’ Astral Weeks fills that void with gusto.”—Shelf Awareness

"Astral Weeks is many things: a deeply-reported illumination of the Boston underground of the late '60s; an investigation of a mysterious cult leader; the skeleton key to a canonical album by Van Morrison. But at its heart is a journalist's quest to understand the very air that was breathed in a single moment in time, a personal reading of the poetry of history, and a yearning to trace the invisible byways of inspiration itself."— Joe Hagan, author of Sticky Fingers: The Life and Times of Jann Wenner and Rolling Stone Magazine

“The lost story behind a timeless album—a wandering Irish songwriter named Van Morrison, stuck in a strange town called Boston in 1968. Ryan H. Walsh digs deep into all the moment’s cultural and spiritual chaos, with a bizarre cast of characters—making the music sound even weirder and more beautiful than it already did. There’s no rock and roll story quite like Astral Weeks.”—Rob Sheffield, author of Dreaming the Beatles and Love is a Mix Tape

“Astral Weeks is a veritable time machine to the folly and ferment of 1968 Boston—a time when James Brown could stop a riot, a movie star could get mixed up in bank robbery, and a high school kid could find himself backing one of rock’s great bands.”—Paul Collins, author of The Murder of the Century


“A magical mystery tour into an untold chapter of countercultural history—the ivy-walled, lace-curtained city of Boston, it turns out, concealed an underground scene as offbeat as anything found on the Haight or the Lower East Side. Ryan H. Walsh takes us down all of its rabbit holes in this lushly told historical portrait.”—Mitch Horowitz, PEN Award-winning author of Occult America

Ryan H. Walsh is a musician and journalist. His culture writing has appeared in the Boston Globe, Vice, and Boston Magazine. He was a finalist for the Missouri School of Journalism's City and Regional Magazine Award for his feature on Van Morrison's year in Boston, from which this book developed. His rock band Hallelujah the Hills has won praise from Spin magazine and Pitchfork; collaborated on a song with author Jonathan Lethem; and toured the U.S. extensively over their 10-year existence. The band won a Boston Music Award for Best Rock Artist, and Walsh has twice won the award for Best Video Direction. He lives in Boston with his wife, the acclaimed singer-songwriter Marissa Nadler. --This text refers to an out of print or unavailable edition of this title.